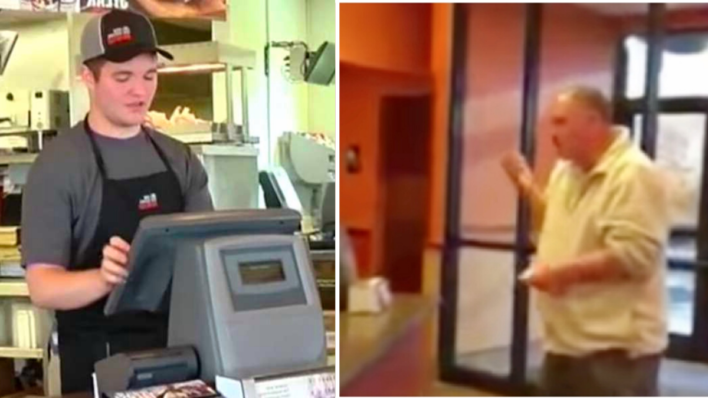 Proving you never know when high school could pay off, one fast-food employee used what he learned from in an elective class to create a moment that moved millions.
By Bryan Liquor    May 4, 2022

Proving you never know when high school could pay off, one fast-food employee used what he learned from in an elective class to create a moment that moved millions.

Caleb Francis was your average high school teenager, having fun and figuring life out while working at a local Taco Bell restaurant for a few bucks. He told ABC News5 that his main motivation was not being a couch potato.

“I’m always trying to like keep busy, so whatever I can do to not sit around and do nothing is kind of what I like to do,” he said.

RELATED: How to Save Money: 7 Tips to Start Saving Now

When it was time for Francis to choose his electives, he was looking for something new and different.

Fast forward a couple of years when one day, during his shift, Francis saw a customer coming in, visibly lost and confused.

That’s when his chosen elective created a magical moment for the customer and millions more.

It turns out that the man wasn’t disoriented, but Deaf, and was struggling to express his order. Luckily for him, the elective that Francis chose two years earlier was none other than sign language. He recalled his motivation being that it might come in handy one day.

A customer in line captured the interaction, showing Francis and the customer interacting easily like two friends – with a side of salsa and sour cream.

The moment quickly went viral with over 22 million views and thousands of captivated comments.

“This is truly a heartwarming story. Learning a whole new language just for the small majority that he could help whilst doing so. Every little helps. Well done Caleb!,” posted one.

The parents of that young man should be very proud. He personifies humanity at its best.

“When I saw the video, I was very happy, and very proud… it’s exactly what Caleb would do. He’s just so super with customers,” he beamed.

Meanwhile, Francis has been in high demand, saying that he’s had several deaf customers asking to order from him.

How Actions and Empathy Speak Louder Than Words

Francis said that while it’s nice to help others, his biggest reward is connecting on a human level.

“I think the biggest misconception about this is people say oh you probably made his day like so much easier and all that stuff,” he said.

RELATED: Stranger Notices A Group Of Young Boys At Taco Bell – Suddenly Walks Up To Them And Does This

What people don’t understand is it’s just exciting for me to get to sign to people as it is for anybody else… so when someone says, ‘Oh I sign’, it’s like, ‘Oh!, it’s just so exciting to me.’

It can be words, a smile, or a few skilled hand gestures from a fast-food worker. One thing is clear: When we take the time to listen and connect with others, special things happen.

take time to listen
“One of the most sincere forms of respect is actually listening to what another has to say.” – Bryant H. McGill