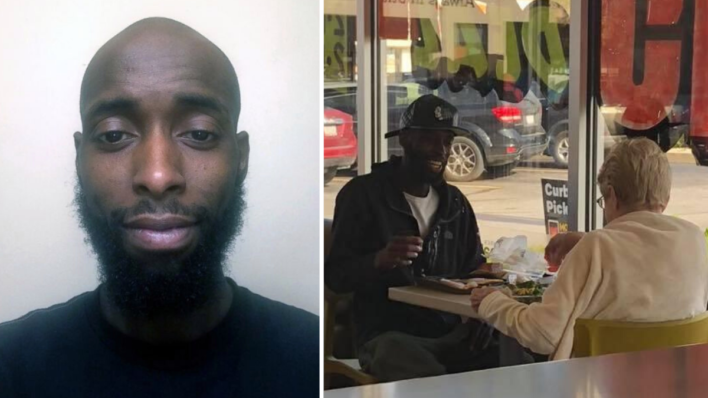 One young man welcomed an elderly woman to his breakfast table when she approached him after she was ignored by a group of teenagers.
By Lindsey Staub    April 27, 2022

One young man welcomed an elderly woman to his breakfast table when she approached him after she was ignored by a group of teenagers.

Friends who eat together, stay together.

Why an Elderly Woman Approached a Complete Stranger at McDonald’s

While on her lunch break with some coworkers, Craft, a teacher from Nobesville, Indiana, saw an older woman approach a young man at the local McDonald’s. The woman just wanted someone to eat with.

“She looked lonely and she went up to Eric, sat the purse on the table and then asked if she could sit and eat with him,” Craft told Good Morning America. “He moved his food over and he said, ‘Well, sure.’”

RELATED: Veteran Breaks Down In Tears When Invited To Join Stranger For Lunch

Wanting to document this sweet moment, Craft took a discreet photo of the two strangers. She shared the picture on Facebook, and the post quickly went viral.

It struck a chord with everybody because you don’t see that. I think that’s what people are hungry to see is the kindness of others.

The man, later identified as 28-year-old Eric Haralson, was not even aware that someone had seen him speaking with the woman, let alone that they shared a photo of the experience to social media. He only found out that he went viral after his friends came across the Facebook post and tagged him in the comments.

Haralson explained that the woman was named Jan and that she had asked to eat breakfast with him shortly after trying to have a conversation with a group of teenagers in the restaurant.

“One of the kids had a man bun and she was very intrigued by it and asked what made him come up with that hairstyle,” Haralson said. “They didn’t take to her that much… she said, ‘What? did I scare them off? I said, ‘I guess you did.’”

The two talked and ate for 45 minutes, then exchanged phone numbers.

“She goes to church every Sunday, we talked a lot about that,” Haralson said. “We talked about my girlfriend, my kids, she did not have any kids or a significant other that she made mention of.”

Haralson’s new friend is one of a kind, according to him.

“I could tell she’s a firecracker,” he said. “She will tell you exactly how she feels and has no problem being outgoing.”

Haralson intends to see Jan again. He left her a voicemail explaining that their photo was receiving a lot of positive attention online, and he plans to invite her out for breakfast again.

I don’t know if she has anyone else in her life and I want to reach out to her as much as I can.

Both Haralson and Jan displayed incredible traits that day: Haralson for including someone who was all alone, and Jan for having the courage to go up to a stranger. From this experience, both people have gained a friend, and neither will have to eat alone again.

Make people feel included
“It is easier to reach our potential when we learn the value of including others in our quest.” – John Wooden
Tags
Share
← Prev Post Next Post →