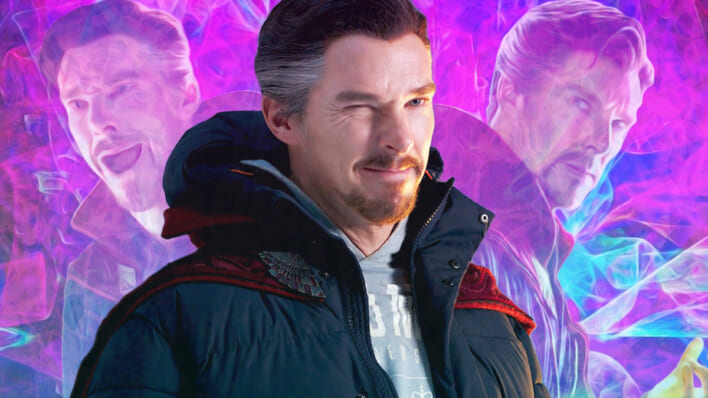 Benedict Cumberbatch is ready take a break from the MCU, and from acting, proving that burnout is a concern, even for Marvel’s Doctor Strange.
By Kevin Melrose    May 7, 2022

Benedict Cumberbatch is ready take a break from the MCU, and from acting, proving that burnout is a concern, even for Marvel’s Doctor Strange.

Doctor Strange in the Multiverse of Madness cements Benedict Cumberbatch as the new center of the Marvel Cinematic Universe, supplanting Robert Downey Jr. But after a string of blockbusters that includes Avengers: Infinity War, Endgame and Spider-Man: No Way Home, and an Oscar-nominated performance in The Power of the Dog, the 45-year-old actor is ready for a break.

Addressing his work-life balance, Cumberbatch told IGN.com, “It gets very multiversal in real life as well.” Asked which variant of himself he’d like to be, the actor said, “I guess one that’s less busy, maybe… I might be that variant very soon, which is nice – taking a bit of a break.”

That may come as a surprise for an actor enjoying a commercial and critical hot streak. However, Cumberbatch’s decision seems to be acknowledgement of the reality of burnout, and the importance of taking a break to recharge. Even if that’s from the most successful film franchise of all time.

Cumberbatch’s low-key announcement serves as a good reminder that, from time to time, everyone needs to take a step back to reassess priorities, practice a little self-care, and try to find the right balance between work and home life.

From Richard III to Doctor Strange, Cumberbatch Has a Busy Career

Before debuting in 2016 as Doctor Strange, Cumberbatch was best known as Sherlock Holmes in the BBC series, and as Khan in the 2013 film Star Trek Into Darkness. But his career, which spans theater, television, film and radio, began far earlier. The actor has been working steadily since the late 1990s, with such noteworthy projects as Atonement, Tinker Tailor Soldier Spy, 12 Years a Slave, The Imitation Game, The Hollow Crown and The Hobbit trilogy.

During that span of more than two decades, Cumberbatch has regularly starred in multiple projects released in a single year. For instance, in 2013, he appeared in no fewer than five films, two plays, two radio dramas and a Simpsons episode. The pace has rarely let up since then, with four films released in 2021. That’s in addition to his role in the Disney+ animated series, Marvel’s What If…?

Cumberbatch’s personal life has been a similar whirlwind, following his marriage in 2015 to theater and opera director Sophie Hunter. The couple has three sons together: Christopher, 6; Hal, 4; and Finn, 3. Like virtually every other family, theirs was affected by the COVID-19 pandemic, as they, and Cumberbatch’s parents, were “stuck” in New Zealand in 2020 for five months during that country’s lockdown. The actor was there filming The Power of the Dog.

Burnout Is Real – Here’s How to Identify and Address It

The World Health Organization concluded in 2019 that burnout isn’t a medical condition. Instead, the U.N. agency determined, it’s a workplace issue, “resulting from chronic workplace stress that has not been successfully managed.”

W.H.O. characterizes the occupational syndrome as feelings of energy depletion or exhaustion; increased mental distance from your job, or else increased cynicism; and reduced efficacy in the workplace.

Although the Mayo Clinic notes personality traits and family life may influence who experiences burnout, there are clear contributing factors. They include a heavy workload and long hours, a work-life imbalance, a lack of control, and extremes in activity (for instance, when a job is chaotic or monotonous).

To address burnout, the Mayo Clinic recommends: collaborating with a supervisor to manage job expectations and set goals; seeking support from co-workers, friends or family; relaxing, possibly through yoga or meditation; exercise; and, yes, sleeping. The latter, stresses time-management coach Elizabeth Grace Saunders, is one of the primary risk factors for developing burnout.

“You don’t need a dream job,” Saunders writes. “But in your overall life, you do need to find time to take care of your health, do things you find refreshing and have a sense of purpose. The closer you are to living your truth, the less likely you are to burn out.”

Cumberbatch’s announced break may appear oddly timed, considering Doctor Strange is only now seizing the MCU spotlight, with Spider-Man: No Way Home and Multiverse of Madness. However, this may actually be the ideal moment, both for the actor and for his best-known film role.

It’s unlikely there’s a need for the Master of the Mystic Arts in the remainder of Marvel Studios’ Phase Four slate. Thor: Love and Thunder, Black Panther: Wakanda Forever, Ant-Man and Wasp: Quantumania, Guardians of the Galaxy Vol. 3 and The Marvels will carry the MCU into the middle of 2023. None of those films has an obvious place for Cumberbatch’s Doctor Strange.

Although the actor didn’t specify the timing of his break, he’s unlikely to disappear from screens any time soon. He’s filming Wes Anderson’s adaptation of The Wonderful Story of Henry Sugar, as well as the Netflix miniseries The 39 Steps. Beyond that, Morning, a futuristic film co-starring Laura Dern, is in pre-production, with an adaptation of the British novel Rogue Male on the horizon.

In short, “very soon” may be the perfect moment for Benedict Cumberbatch to take a break from Doctor Strange, and from acting, to slow down, spend more time with his family, and find that elusive work-life balance.