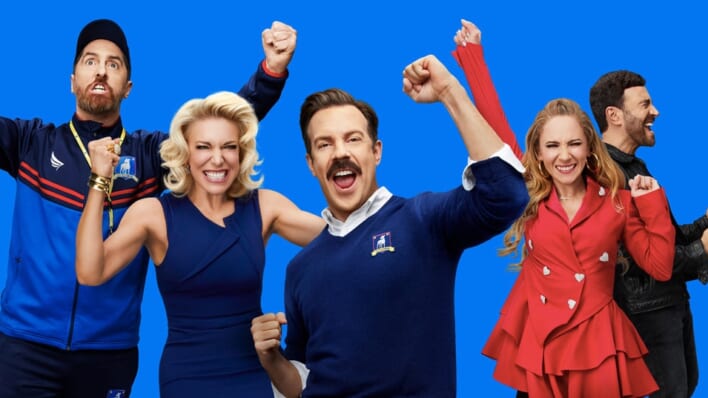 The Best Ted Lasso Quotes From the First Two Seasons

Ted Lasso has charmed audiences since its 2020 debut. While we’re eagerly awaiting news about Season 3’s release date, let’s take a look at some of the best Ted Lasso quotes from the first two seasons.
By Amy Lamare    September 1, 2022

Ted Lasso has charmed audiences since its 2020 debut. While we’re eagerly awaiting news about Season 3’s release date, let’s take a look at some of the best Ted Lasso quotes from the first two seasons.

Ted Lasso‘s arrival in 2020, at the beginning of global COVID-19 lockdowns, was perfectly timed. It was precisely the show audiences needed, following a college football coach from Kansas (played by Jason Sudeikis) who becomes the coach of an English soccer team. Lasso (the character) was set up to fail, and yet… he didn’t. He succeeded in charming his colleagues, players and, eventually, his boss — to say nothing of viewers.

Ted is a fish out of water, and a master of one-liners that seemingly come out of nowhere, yet reveal layers of meaning and invite introspection. Ted is the king of inspirational sayings, and of well-timed dad jokes that make us groan as much as they make us laugh.

The cast of Ted Lasso is at least as comically adept as Sudeikis is at delivering quips and double entendres. The scripts remain pretty wholesome, despite the penchant by footballer Roy Kent (Brett Goldstein) for peppering his speech with F-bombs. The main cast is rounded out by Coach Beard (Brendan Hunt), Rebecca Welton (Hannah Waddingham), Keeley Jones (Juno Temple) and Nathan Shelley (Nick Mohammed), who can hold their own against Sudeikis’ brand of humor.

There’s no official date announcement for Season 3, despite the Twitter account of Ted Lasso character Sam Obisanya teasing “9-12-22.” Does he mean Sept. 12, or Dec. 9? Is he leading us on? While we wait to learn when “kindness makes a comeback” — that was the tagline for Season 2 — let’s take a look at some of the best Ted Lasso quotes from the first two seasons.

Keep Calm and Carry On

Quote: “There’s two buttons I never like to hit, all right? And that’s panic and snooze.”

In the Season 2 premiere, “Goodbye Earl,” we learn that Ted Lasso makes a point not to panic, embodying the English ethos, “Keep calm and carry on.” Only with a Midwestern accent, of course.

Ted refuses to panic, or to walk away, no matter how many games he loses, or how many of his players are behaving badly. He gets the job done under any circumstances.

“I’d hate to see you and Michelle Obama arm wrestle…”

Full quote: “See? What’d I tell you, huh? This woman right here is strong, confident and powerful. Boss, I tell ya, I’d hate to see you and Michelle Obama arm wrestle, but I wouldn’t be able to take my eyes off it, either.”

In Season 1, Episode 3, “Trent Crimm, Independent,” Ted has yet to discover he’s a pawn in the scheme by Rebecca Welton, the new owner of AFC Richmond, to spite her philandering ex-husband. Ted’s “Michelle Obama” comment is sincere, and catches Rebecca by surprise. “Oh, that’s not a compliment I’ve had before,” she replies. Keeley Jones interjects, “Yeah, you do have perfect, action-figurey arms,” to which Rebecca replies, “Oh, there’s another one.)

At this point in the series, Rebecca is all business, and closed off to the idea that she could be friends with her employees. But this may be the first time she sees Ted and Keely for who they are. Over time, they become the two most important people in her life.

Full quote: “You know, I always figured that tea was gonna taste like hot, brown water. And you know what? I was right. It was horrible.”

Ted Lasso is about as American as it gets and he’s very much a fish out of water in England, especially when he considers tea, the national beverage of England, to be “hot, brown water.” When Rebecca offers him tea soon after meeting him in the series pilot, she asks,, “How do you take your tea?” Ted responds, “Well, usually I tell them to take it right back to the counter, because someone has made a horrible mistake.”

“I do love a locker room“

Full quote: “I do love a locker room. Smells like potential… and am I getting notes of Axe body spray?”

This quote is from the 2020 pilot, in which Ted, newly hired as coach, enters the AFC Richmond locker room. It’s a simple line, but with it Jason Sudeikis conveys the wholesome, and honest, hopefulness of Ted Lasso.

“You beating yourself up is like Woody Allen playing the clarinet…“

Full quote: “You beating yourself up is like Woody Allen playing the clarinet – I don’t wanna hear it. All right?”

RELATED: Motivational Quotes to Help You Rise Above

In Season 1, Episode 9, “All Apologies,” Roy Kent makes several mistakes on the field, which leads Ted Lasso to weigh whether to bench the veteran. However, Ted won’t tolerate Roy’s self-recrimination — something at which the player excels.

It’s a perfect example of Lasso’s to-the-point optimism. He’s basically saying that everyone has bad days, and dwelling on them is useless.

“You two knuckleheads have split our locker room in half.“

Full quote: “Now, listen. You two knuckleheads have split our locker room in half. And when it comes to locker rooms, I like ’em just like my mother’s bathing suits: I only wanna see ’em in one piece, you hear?”

RELATED: 8 Ms. Marvel Quotes That Will Inspire You to Be the Hero of Your Own Story

Roy Kent and Jamie Tartt (Phil Dunster) are at odds in the Season 1 episode “For the Children.” Jamie, the young upstart, has talent. However, the veteran, Roy, has experience. And Jamie can no more fathom Roy’s experience than Roy can return to the heyday of his career. They fight like cats and dogs, which forces Ted Lasso to seize control.

In that same episode, Ted tell Roy, “You know how they say that ‘youth is wasted on the young’? Well, I say don’t let the wisdom of age be wasted on you.”

“Not unlike folks at a hip-hop concert whose hands are not in the air.”

Full quote: “It’s just a group of people who care, Roy. Not unlike folks at a hip-hop concert whose hands are not in the air.”

During Season 1, Episode 8, “Diamond Dogs,” Ted, Coach Beard, Nick and Higgins (Jeremy Swift) bond over work and romantic problems, and brand themselves the Diamond Dogs. They even have their own calling card: a howl.

When Roy wanders into the office with matters of the heart, he encounters the Diamond Dogs. He’s skeptical, as usual, leading to Ted’s assurance.

Ted Lasso isn’t the only character on the series who doles out quotable quips. At one point or another, all of the characters have their moments. That’s how strong the writing on Ted Lasso is.

I like the idea of someone becoming rich because of what they gave to the world, not just because of who their family is

Don’t you dare settle for fine.

You can’t get hurt if you don’t try

Old people are so wise. They’re like tall Yodas.

I’ve been to Vegas many times. One night is good, two nights is perfect, three is too many.”

A bit of advice for being a boss. Hire your best friend.

Each of those quotes reveals so much about where the characters are in their life journeys, and who they are at their core. Sam is in awe of the wealth he sees around him in Europe. Roy sees Keeley for the strong, amazing woman she is. Jamie, as usual, is really only thinking about himself. Coach Beard … well, no one really knows what Beard is up to. And Rebecca is learning about true friendship from Keeley.

What Is the Ted Lasso Motto?

Choosing only one of Ted Lasso’s mottos is like finding a needle in a haystack. Over the first two seasons of the Apple+ TV hit, Jason Sudeikis’ character doles out advice, friendship and hope to whomever needs it — and in just the way they need it at the time. He’s like a savant of kindness.

However, if we have to settle on one motto, it’s what is emblazoned on the crooked yellow-and-blue sign above the door to his office: “Believe.” Believe in yourself; believe in other people; believe in love and friendship and life; believe you will find your way.

How Does Ted Lasso Say Thank You?

Honestly, we could all take a lesson from Ted Lasso. He’s not perfect, but no one is. However, he always strives to be kind, to see the other person, and to offer them what they need. Instead of saying thank you, Ted Lasso typically says, “I appreciate you,” letting the person know he’s grateful for what they’ve just done or said.

Perhaps you’ve heard someone say “I appreciate you” recently, and wondered where it came from. It’s one of dozens of amazing Ted Lasso quotes.

The Best (and Funniest) Quotes From The Office