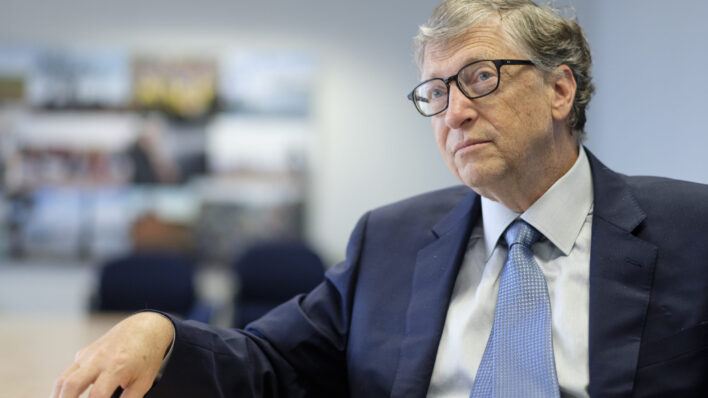 We can learn a lot about the world by taking the time to study and read, no matter how old
By Aly Walansky    October 30, 2018

We can learn a lot about the world by taking the time to study and read, no matter how old we get. And no matter how successful and famous a person is, that truth does not change.

“These books make me optimistic about the world and help me understand the role of innovation in driving progress,” wrote Gates in a tweet earlier this month.

I just shared a new list on @Likewise. These books make me optimistic about the world and help me understand the role of innovation in driving progress. https://t.co/SVqGlLdBUp

Gates recently touched on the books that especially shaped how he thinks about the world in Likewise, a mobile recommendation platform for books, TV shows, movies, restaurants and other entertainment.

RELATED: Bill Gates Says You Should Be Reading This Often-Ignored but Extremely Important Type of Book

Energy and Civilization: A History Gates loves Smil’s way of capturing the big picture. “I’ll admit that Energy and Civilization is not easy reading,” wrote Gates on his blog. “In fact, when I read my first Smil books years ago, I felt a little beat up and asked myself, ‘Am I ever going to be able to understand all of this’ But [the book] follows an easy chronological progression and is well edited.”

This book links energy consumption and economic growth, and it’s a connection Gates has examined as well and it is why he works on pushing for energy innovation. Gates says this book made him feel more optimistic about when next generation in clean energy will be reached, “from carbon-natural liquid fuels to game-changing improvements in energy generation, storage and transmission.”

Enlightenment Now: The Case for Reason, Science, Humanism, and Progress Gate’s shared his favorite details from this book, such as how we’re actually less likely to be killed by a bolt of lightning than we were a century ago. “The world is getting better, even if it doesn’t always feel that way. I’m glad we have brilliant thinkers like Steven Pinker to help us see the big picture,” Gates wrote in a review of the book. This book “is not only the best book Pinker’s ever written,” wrote Gates, “it’s my new favorite book of all time.” That’s high praise! In “Factfulness,” the authors caution against dividing the world into rich countries and poor countries —but instead multiple income group levels, from extreme poverty to levels where people have running water or enough disposable income to take vacations. Gates see this as a better way to detect progress., that way we wont’ think that anyone without a certain level of quality of life is poor, Gates wrote. “This was a breakthrough to me,” explained Gates on his blog. “The framework Hans enunciates is one that took me decades of working in global development to create for myself, and I could have never expressed it in such a clear way. I’m going to try to use this model moving forward.” This book written by Israeli historian Harari looks at the history of humanity to examine what comes next. “Most humans assume that we were always the ones in charge, lording over the rest of the animals,” wrote Gates on his blog. “But Harari reminds us that long before we built the pyramids, wrote symphonies, or walked on the moon, there was nothing special about us.” Gates has said this book inspired him to think of humans and happiness and what makes us unique and where we are going as a species. “Those are big questions as old as the history of our species,” Gates wrote on his blog. “After you finish this book I have no doubt that, like me, you’ll want to get together with some of your favorite Homo sapiens to try to answer them.”