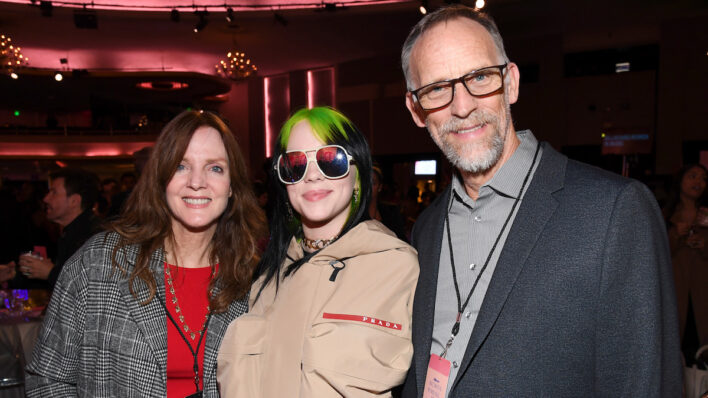 Billie Eilish’s stratospheric rise to fame has led many to question her success, even blaming it on her parents’ “connections.” The reality is rather different.
By Shaoni Das    April 22, 2021

Billie Eilish’s stratospheric rise to fame has led many to question her success, even blaming it on her parents’ “connections.” The reality is rather different.

No artist has taken the world by storm with such swiftness over the last few years as Billie Eilish.

The 19-year-old California native doesn’t just stand as one of the industry’s most beloved, intriguing, and critically acclaimed musicians; she has practically come to represent the entirety of Gen-Z, whether it’s through her oversized clothing, her striking hairstyles, her macabre visuals, her dark goth-pop sound, or her remarkable ability to be brutally honest about mental health.

While Billie’s fashion style and unique musical stylings capture the lion’s share of attention, it must be noted that her personal life is just as fascinating in more than a few ways. We were able to get a glimpse into her private sphere through her 2021 documentary Billie Eilish: The World’s A Little Blurry, but there’s undoubtedly more to be explored in terms of her dynamics with brother Finneas and parents Maggie and Patrick O’Connell.

So let’s take a few moments and chronicle the early life of Billie Eilish. As it turns out, her success becomes all the sweeter once you take her upbringing and family history into account:

Maggie worked as an actor, vocal artist, and screenwriter through the nineties and early aughts. She’d been a background artist in popular television series like Friends, The X-Files, Curb Your Enthusiasm and was even involved with The Groundlings as a member and teacher. While at The Groundlings, a sketch comedy troupe, Maggie worked with up-and-coming comedians like Will Ferrell, Melissa McCarthy, and Kristen Wiig.

Billie’s dad Patrick played bit parts in a handful of shows and movies, including The West Wing, Baskets, Iron Man. Patrick and Maggie met while filming a project in Alaska and married in 1995. They welcomed their first child, son Finneas, in 1997.

It’s true that both of Billie’s parents were in the industry, and therefore she didn’t necessarily struggle with finding support, both emotional and financial, from her folks. Yet, it’s key to remember that Billie shouldn’t outright be accused of nepotism. Her parents weren’t huge A-listers who had assistants, agents, and PR professionals lined up at their door, catering to each and every one of their desires and ego trips. They were working actors who lived paycheck to paycheck and were highly dependent on their next role to get them through the month and pay their bills. This is the case for the majority of actors in the entertainment industry; you go through roles one after the other in the hopes of catching a lucky break one day and landing a consistent gig.

During my lifetime, our parents were never able to fully financially support us off of their work as actors. Our dad worked 12 hour days 7 days a week as a construction worker for Mattel and our mom was a teacher. Our parents gave us love but knew no one in the record industry.

As per Rolling Stone and confirmed by Billie’s dad himself, they were “unemployed actors” who decided to press pause on their careers to homeschool their children and nurture their creative abilities. Maggie and Patrick ensured that their children were fully encouraged to pursue and excel in their passions — despite the family’s unstable financial situation.

Maggie shared in an interview that Finneas was only able to attend a singing lesson because she’d arranged to cook for the teacher during the lesson. Similarly, Patrick exchanged handyman services for Billie’s gymnastic classes. These sorts of sacrifices extended to their household as well — Maggie and Patrick chose to “sleep on the futon in the living room” so that Billie and Finneas could be spared from sharing a room.

Both Maggie and Patrick were amateur musicians and kept three pianos in their modest two-bedroom house, with music residing in every “nook and cranny” of their home. Maggie taught her children the basics of songwriting so that they could develop a passion for creating and writing music. In fact, nothing gave the parents more joy than seeing their children becoming budding, thriving artists before their very eyes.

We had a rule growing up that was kind of a household respected thing of just no matter what time it was, no matter how old we were, if we were creating, writing music, playing piano, playing guitar, or any instrument at all, we could stay up as long as we were doing that.

The family faced their share of financial difficulties, but they worked together to treat their children to whichever tools and structures they needed to succeed as ambitious young artists. Billie also added that “being creative” was the most critical consideration in their household — not the technical “esoterica you’ll never use” from high school.

Maggie and Patrick sacrificed several luxuries and privileges when raising Billie and Finneas, so it’s only fitting that they’re able to reap the rewards of Billie’s outstanding career.

Finneas revealed in a tweet last year that he paid off his parents’ mortgage and that “Billie pays them each salaries to tour with [them] full time,” even though Maggie and Patrick had allegedly told them that they would do it at no cost. Billie broke out early — her debut song ‘Ocean Eyes,’ produced by Finneas in their bedroom, blew up on SoundCloud when Billie was just 13. By the time she had launched her debut studio album, she had accumulated north of a billion streams on Spotify and other music streaming platforms.

Therefore, her mom and dad had to adapt to the onslaught of fame rapidly. When Patrick realized that Billie’s career was taking off, he decided to quit his construction job and become her “one-man crew,” undertaking everything from driving the van to doing the lights, as per Rolling Stone. His handyman skills are as helpful as ever when he joins his daughter on tour — he takes it upon himself to “fix whatever needs fixing,” whether it’s carpentry or cleaning up the floors.

As for Maggie, she works around the clock as Billie’s “psychological gatekeeper.” She’s the first and frequently the only point of contact between Billie and the rest of the world. She’ll ensure that her daughter’s mental health is prioritized, that the 37-person crew is content and getting along, and that the siblings remain focused on the big picture.

You also know that someone has to be completely your child’s advocate. That’s fallen to us. She can speak up for herself, and she does. But sensing that she needs a break or she’s tired, that’s mom.

Maggie Baird on Your Teen Mag

Billie, on the other hand, has nothing but immense love and respect for her parents’ sacrifices. She said Maggie is the “best mama in the world” and that she and her dad are “very similar.” She also expressed admiration for Maggie and Patrick’s respective skillsets in the arts and said that she wishes they’d had more recognition early on. Her ultimate goal is to make a movie featuring the two of them, said Billie.

My dad is the best actor I’ve ever seen. And my mom can do all these voices and characters — she’s incredible. So I wish they’d had more recognition. I actually want to make a movie and put them in it — I’ve never told anyone that.

You’ll never be able to measure your parents’ sacrifices

The love for a child is immeasurable. Some parents will sail the seven seas to put a smile on their child’s face or die trying. Of course, this doesn’t mean that there aren’t enough toxic or abusive families around to disprove this theory, but we should also acknowledge the vast majority of mothers and fathers only want the best for their children. Some will have their own way of expressing their goodwill, but most will make their sacrifices in their little way.

Maggie and Patrick were thought to have spoiled Billie and Finneas with their industry perks, but this couldn’t be further from the truth. The media and the public overestimated their fame, not knowing that they’ve fought tooth and nail to cultivate creativity in their children and lead them towards the arts. They could have just taken the easy way out and only remain focused on their basic necessities. Yet, they made it a mission to foster their talent and empower them to create beautiful, fulfilling art. We’ll never truly measure how much parents have given up for us, but we can at least show appreciation every step of the way.