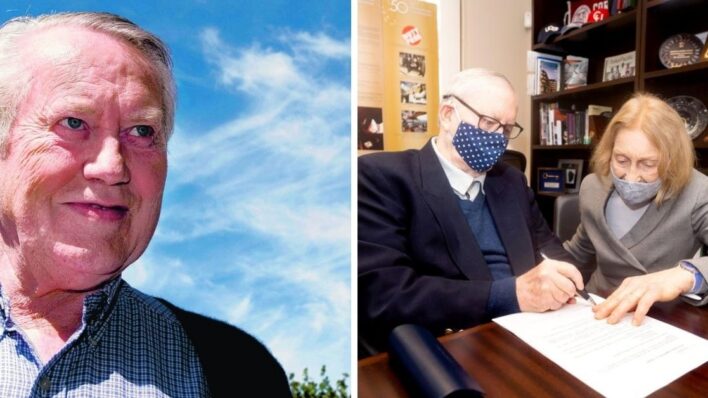 Charles “Chuck” Feeney decided that he wanted to take his philanthropic work to the next level by going completely broke. So he set out to give away his $8 billion fortune away.
By Aly Walansky    September 17, 2020

Charles “Chuck” Feeney decided that he wanted to take his philanthropic work to the next level by going completely broke. So he set out to give away his $8 billion fortune away.

Many dream to amass a fortune but few can reach that goal. After Irish-American billionaire Charles “Chuck” Feeney met that goal, he set himself another one – to give all that money away and die a broke man.

Feeney is the co-founder of airport retail chain Duty Free Shoppers (DFS), and though he has always been a major philanthropist, many have never heard of him, because he’s also famously reclusive.

Philantropy to the extreme

Everyone knows the Musks and Zuckerbergs of this world, who also have given back some of their money and time to philanthropic causes. Feeney, though, gave away all of his money and is now penniless. Deliberately!

But it’s not like you can take it with you, right?

“We learned a lot. We would do some things differently, but I am very satisfied. I feel very good about completing this on my watch,” Feeney told Forbes. “My thanks to all who joined us on this journey. And to those wondering about Giving While Living: Try it, you’ll like it.”

The “James Bond of Philanthropy”

Since 1984, Feeney has given away money to educational institutions, human rights groups and social causes, including a $76 million grant for grassroots campaigns supporting the passage of Obamacare.

In fact, his foundation, Atlantic Philanthropies, went out of business this week after giving away more than $8 billion worldwide over the span of 40 years. And most of the time, he gave that money away anonymously. Because of that, Forbes has called him the “James Bond of Philantropy.”

“When I first met him in 2012, he estimated he had set aside about $2 million for his and his wife’s retirement,” wrote Forbes editor Steven Bertoni, who has interviewed Feeney multiple times.

He now lives in a modest apartment

Feeney now lives in San Francisco, in an apartment “that has the austerity of a freshman dorm room” according to Forbes.

And Feeney has always been understated, as proven by his anonymous philanthropic feats. Warren Buffett and Bill Gates have said Feeney was a inspiration for the Giving Pledge, a program to encourage billionaires to donate the majority of their wealth in their lifetimes.

“Chuck was a cornerstone in terms of inspiration for the Giving Pledge,” Warren Buffett said. “He’s a model for us all. It’s going to take me 12 years after my death to get done what he’s doing within his lifetime.”

And Feeney’s philanthropic work has also been significant. He solved major problems from restoring peace in Northern Ireland to refreshing Vietnam’s health care system. He tackled his charitable work with intentionality, going after causes that he could tackle holistically.

His philosophy is nothing short of inspirational.

I see little reason to delay giving when so much good can be achieved through supporting worthwhile causes. Besides, it’s a lot more fun to give while you live than give while you’re dead.

Where did his $8 billion go?

After shutting down Atlantic Philanthropies, where did his $8 billion fortune go?

Feeney dedicated $3.7 billion to education. More than $870 million were allocated to causes relating to human rights and social change–such as abolishing the death penalty in the U.S. He also gave away more than $700 million to health causes anywhere from America to Vietnam.

Don’t wait to give back

Obviously, we’re not all billionaires. Yet, we all have the capacity to give back. Whether it is with your time or your money, making a change in someone’s life or working for a cause close to our hearts is something we can all do. With the way life goes, we can forget to give back, which is why it is important to make time for it.