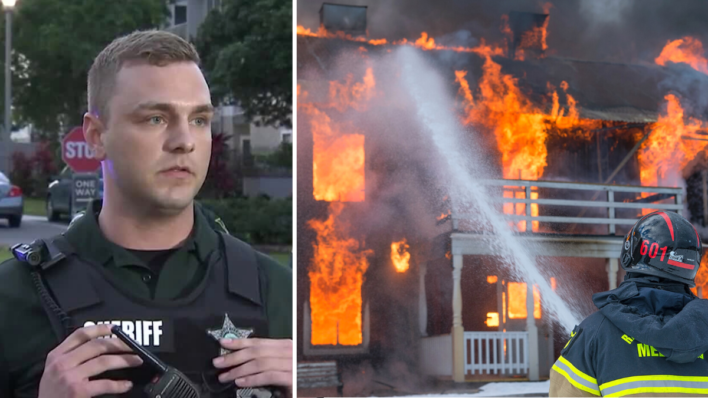 One police officer risked his life to save a screaming baby who was trapped in a fire.
By Sophie Babinski    May 6, 2022

One police officer risked his life to save a screaming baby who was trapped in a fire.

House fires are a common occurrence that claim the lives of innocent people all the time. Usually the fires are accidentally set thanks to human error, but sometimes there are more nefarious causes.

Nevertheless, first responders always get to the scene quickly and are often responsible for saving lives, which they did recently in Orange County, California.

A fire was reported in the early hours of the morning in a 24-unit apartment building, and when the fire rescue team showed up to manage the scene, they were shocked by what they saw.

The building was obscured by smoke and people were panicked, hanging off balconies and rolling off of the roof. Screams could be heard throughout the chaotic scene, signaling to the firefighters that there were people stuck inside the building. Even worse, a baby’s crying was unmistakable, and was coming from inside the fiery apartment complex.

We train for all situations. The roof came down, so there was heavy fire up in the attic. Part of the floor collapsed as well. So making access into some of those apartments was a bit difficult, but that’s something that we train for.

One Police Officer Risked His Life to Save a Trapped Baby

When he heard the distinct sound of a child crying, Deputy William Puzynski kicked his rescue into high gear. He located the source of the cries, a baby and her mother on the third floor of the building. He then scaled the balconies, reaching the third floor in record time, where he was able to get ahold of the child and get her to safety.

In the meantime, other firefighters were able to rescue the remaining eight people captured in the flames. Almost miraculously, nobody’s lives were lost. Nevertheless, power to the building had to be cut indefinitely and more than half of the apartment’s units were severely damaged. Even more tragically, a few people lost their beloved pets in the fire.

It’s hard to explain. I just knew I had to save the baby. I don’t think I was thinking. I just had to figure out a way.

Fire rescue teams are well trained and always prepared for even the most intense situations. Stories like this remind us of the importance of being vigilant and careful in our everyday lives- we must always make sure we are not putting our loved ones in any more danger than we have to.

If we do run into scary situations however, we can rest assured that there are people out there who will not only risk their lives to help, they will be well trained and able to do so. What a relief!