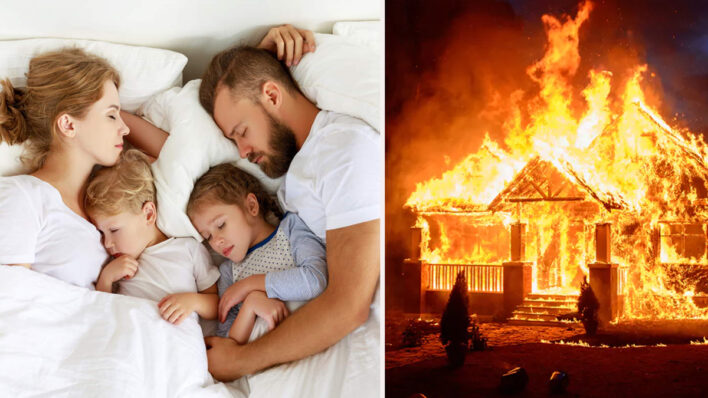 A family has one fast-acting boy to thank after coming within minutes of losing their lives in a raging fire.
By Bryan Liquor    April 4, 2022

A family has one fast-acting boy to thank after coming within minutes of losing their lives in a raging fire.

Among family quotes, there’s one that says “Time spent with family is worth every second.” One family would find out how much when a fire tore through their home, and a tiny hero swooped in to save them.

While Nathan and Kayla Dahl were sleeping snuggly in their bed, they were oblivious to the burning danger they were in.

RELATED: Students Go Above And Beyond To Protect 5-Year-Old Boy In Wheelchair From Harsh Winter Weather

Had they not been both recovering from COVID-19 — and lost their sense of taste and smell — they might have been alerted to the thick smoke rapidly engulfing their home from a fire raging in their living room, threatening them and their five young kids.

With smoke inhalation causing permanent brain damage in as little as 5 minutes, time was working against them.

In a surprising twist, it would be the tiniest household hero who’d come save the day.

Speaking with TODAY, Kayla Dahl and her husband recalled being woken up frantically by none other than their youngest child, 2-year-old son Brandon. He didn’t need expert communication skills to get the message across.

“He tapped me on my feet in bed and was coughing and saying, ‘Mama, hot. Mama, hot,'” she said.

After a brief shock, husband Nathan knew they had to act fast.

My heart just dropped. In my head, I already knew this house was gone. We had to get out

They hurriedly gathered Brandon’s 4 other siblings and rushed them out to safety. Fortunately, the entire Dahl clan was well-prepared thanks to Nathan being a six-year volunteer firefighter who routinely ran fire drills with his family for that very moment.

“We had a plan,” Nathan Dahl said. “We’ve had a plan. This is how everything’s going to go,” he told WFAA.

By the time they escaped, their home was engulfed in flames. More importantly, the entire family made it out unharmed.

The Dahls believe the fire was caused by a gas heater in the home’s living room. Despite having brand new fire alarms, none went off to alert them.

By a stroke of luck, Brandon was sleeping in the living room that night due to being sick and Kayla wanting him close so she could check on him. On this night, it was Brandon doing the checking up.

While the Dahls are rebuilding their material life from scratch, they aren’t doing it alone. One of Kayla’s best friends started a GoFundMe page, which has raised over $30,000, far surpassing its $5,000 goal.

When It Comes to house Fires, Stay Prepared to Stay Safe

Even as the smoke clears and things rebuild, Kayla Dahl is still in awe of her fearless firefighter.

He saved our entire family. I mean, he’s our little mini hero

Pappa agrees: “We had seconds,” Nathan Dahl said. “It’s nothing short of a miracle.”

The story is also a reminder that a family can never be too prepared for when the worst hits.

According to the Red Cross, families should have an escape plan, making sure kids have two ways to get out of every room in the home and have a family meeting spot outside.

You don’t need to be a firefighter to be ready, just time to practice and prepare. Success can be a matter of life and death.