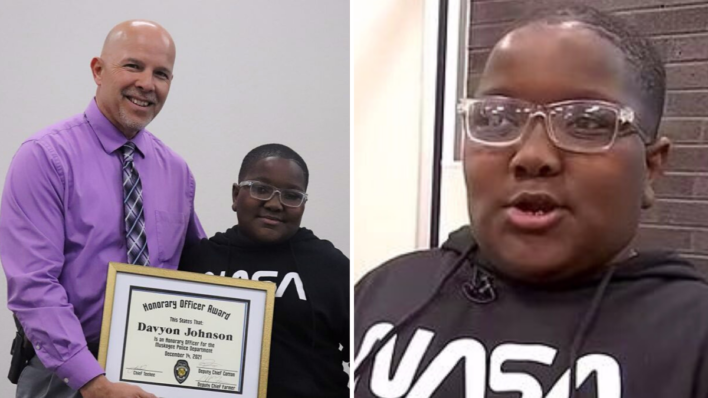 When presented with the opportunity to help two different people, one middle schooler sprung to action – and saved them both!
By Lindsey Staub    March 31, 2022

When presented with the opportunity to help two different people, one middle schooler sprung to action – and saved them both!

It is incredible when someone saves another. But doing it twice in one day is exceptional, especially when the rescuer is only in sixth grade.

In Muskogee, Oklahoma, a student was unscrewing the cap of his water bottle with his mouth so that he could fill it up. But as he loosened it, he inhaled the cap. Davyon was in class when the boy came in, choking.

“Davyon immediately sprinted over and did the Heimlich maneuver,” Davyon’s principal Latricia Dawkins said. “From the account of the witnesses, when he did it the bottle cap popped out.”

Davyon’s quick thinking and skills helped his classmate free his airways that December day. As for where he learned the Heimlich maneuver, Davyon thanks YouTube. He recommends that everyone should watch a video to learn how to do it.

“Just in case you’re in the situation I was in, you can know what to do,” he said.

The 11-Year-Old Who Became an Honorary Police Officer

That same day, Davyon Johnson helped a woman out of her burning house. The fire, which started in the back of the home, quickly traveled forward toward the front.

“It was a disabled lady and she was walking out of her house,” Davyon said. “She was on her porch. But I thought, being a good citizen, I would cross and help her get into her truck and leave.”

For his heroic acts, Davyon was named an honorary member of the police and sheriff’s departments at the Muskogee Board of Education meeting. This kind of recognition for Davyon was no surprise to the people who know him, though.

He is just a kind soul and well-liked by his peers and staff alike.

Like his principal, Davyon’s mother, LaToya Johnson, expected this kind of brave behavior from her considerate son. She attributes Davyon’s propensity to help others to his uncle, Wendell Johnson, who is an emergency medical technician.

Davyon’s selflessness, assertiveness, and quick response saved the lives of two people in one day. Stay alert and ready to jump in at any moment, the way Davyon did with his choking peer. And be willing to look out for others, like Davyon did when he helped the woman from her porch. Do these things, and the world will be a better, safer place.

lend a helping hand
“There is no exercise better for the heart than reaching down and lifting people up.”
– John Holmes
Tags
Share
← Prev Post Next Post →