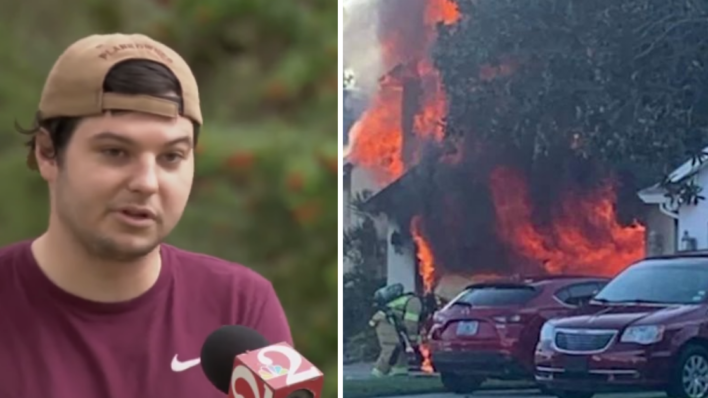 When a fire started to burn in a couple’s garage, no one was there to help. Fortunately, an unlikely hero
By Joel Balsam    December 3, 2020

When a fire started to burn in a couple’s garage, no one was there to help. Fortunately, an unlikely hero

When a fire started to burn in a couple’s garage, no one was there to help. Fortunately, an unlikely hero – an Amazon delivery person – saw the flames and jumped to the rescue, proving that the kindness of strangers does exist.

He ran towards the fire

Sean Campbell, 23, was doing Amazon deliveries in the Century Woods Subdivision of New Smyrna Beach, Florida when he heard screaming.

“I heard the screaming and when you hear something like that you have to go to it,” Campbell told NBC affiliate WESH.

Campbell dropped his packages and ran towards the fire.

When he got there, he learned an elderly woman had been helped outside, but an elderly man was still trapped in the home.

So he did the right thing without hesitation.

They nearly didn’t make it out

Campbell broke down the front door and quickly spotted the man.

“He was in the kitchen, you know, with his walker just standing there,” Campbell told WESH. “I don’t think he really knew what was going on. I was like, ‘Sir, c’mon. I need to help you. C’mon, let’s get out.'”

The man struggled to move quickly, so Campbell had to urge him to move faster.

“He was trying to grab his walker… I was like, ‘No, we got to move… you’ve got to see another day!'”

After bringing the man to safety, firefighters entered to rescue the family dog.

The couple’s son, Tim West, wasn’t there when the fire broke out, but he arrived soon after they were brought to safety. He told the news camera that Campbell wasn’t just in the right place at the time, he was a hero.

“It was fantastic. He was both here and able to go inside and brave enough to go inside. We really appreciate that.”

“I’m thankful I got the people inside out,” he said.

The goodness of strangers

Stories like this are beautiful reminders that despite the fact that some people do bad or irresponsible things, kindness still exists — and it’s all around us.

This Amazon driver could have easily ignored the screams and continued with his deliveries to avoid risking his own safety.

But he had the reflex to jump into action and save a life. Let his heroic reaction inspire you the next time you’re faced with the choice to help a stranger.