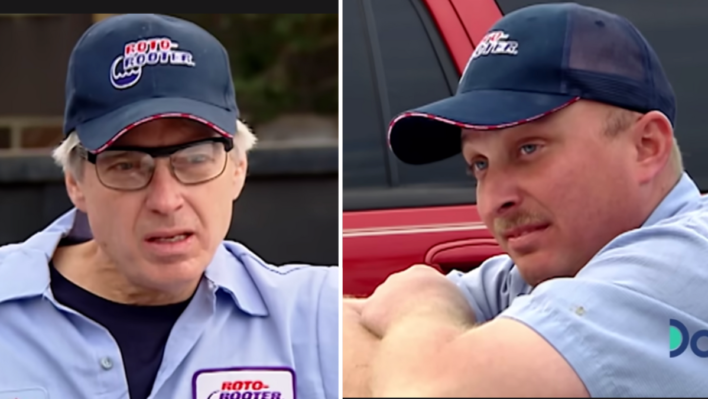 When the CEO of Roto Rooter went on Undercover Boss, he thought he’d just learn about plumbing; boy, was he wrong.
By Lindsey Staub    November 1, 2022

When the CEO of Roto Rooter went on Undercover Boss, he thought he’d just learn about plumbing; boy, was he wrong.

On an episode of Undercover Boss that aired in 2010, the president and CEO of Roto Rooter, the largest plumbing and drain cleaning business in North America, posed as a new employee and made the rounds in order to improve his business.

However, he learned a lot more than just how to streamline plumbing, and the most valuable lesson came from an employee.

Why the CEO of Roto Rooter Went Undercover to Work

Rick Arquilla came on the first season of Undercover Boss to see the systems he had created in action.

Even though Arquilla secretly ran the company, he was not able to do a lot of the labor the company expected of its employees. His trainer, six-year veteran of the company Chris, had to help Arquilla with even the easiest of tasks. Arquilla complimented Chris on his skill, though Chris didn’t need the praise.

“I’m very open-minded to learn something,” he said. “That’s why I am where I’m at today.”

RELATED: Undercover Boss Finds the Truth About His Employee’s Past – What He Does Next Brings Her to Tears

When Arquilla asked Chris to elaborate, Chris revealed that he was a recovering drug and alcohol addict.

“I’ve been in recovery for six and a half years,” Chris said. “It’s very tough sometimes. I realized I had a problem; I actually had to go through rehab. Six and a half years later, I’m standing right here in front of you.”

Arquilla was taken aback by Chris’s confession. “I give you a lot of credit for saying, ‘Hey, enough of this,’” Arquilla told Chris.

Chris’s previous struggles were no secret, he chose to share them in order to inspire and help others.

“I have no problem sharing it with anybody neither. I have nothing to hide,” Chris said.

When Arquilla revealed to Chris that he was not a new employee but the CEO of the company, he had something else to share.

“I want you to know it’s a real honor having met you, and something else I didn’t tell you is my dad was an alcoholic. It ruined his life, made it hard on me and we never reconciled,” Arquilla told Chris. “But I did reconcile this week with him. You’re the guy who allowed me to do that.”

Explaining this to Chris, Arquilla got emotional. Chris reached across the desk to pat Arquilla on the arm and urged the boss to “let it out.”

“You’re an inspiration to me,” Arquilla told Chris. “I want you to go around to different cities in Roto Rooter and speak about your alcohol addiction.”

Now it was Chris’s turn to get teary-eyed.

“That would be an honor,” Chris said. “You know, if I could reach out and help just one person, it would make it worthwhile. All I can say is thank you very much.”

Arquilla went on the reality show expecting to impart his own wisdom on his employees. Instead, he learned a lot from them. Chris and Arquilla were able to transcend the imposed hierarchy of a boss-employee relationship by being honest with one another, and through this, Arquilla was able to reconcile his tumultuous past with his late father. All it took was one person to touch another’s life.

Employee Reveals to Undercover Boss He Lost $240,000 in a Bad Business Deal – What Happens Next Is Unbelievable