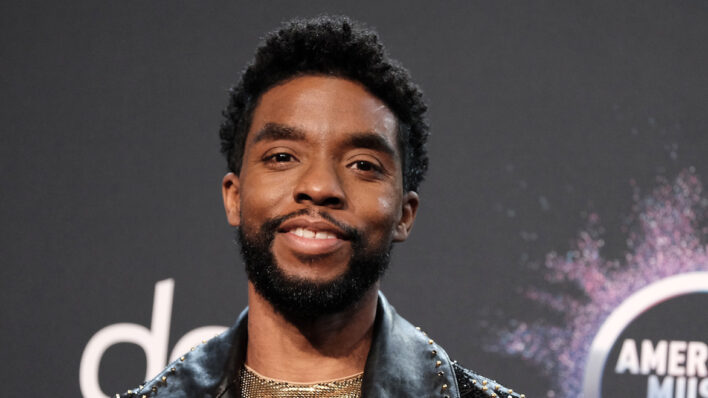 Chadwick Boseman is now one of Hollywood’s most sought after actors. Yet, that wasn’t always the case until a mysterious actor stepped in.
By Maya Khamala    June 15, 2020

Chadwick Boseman is now one of Hollywood’s most sought after actors. Yet, that wasn’t always the case until a mysterious actor stepped in.

Anyone who’s seen Ryan Coogler’s Black Panther, released in 2018, knows that the film’s powerful analogies are still timely in 2020, and likely will be for years to come.

It was honored with an American Film Institute (AFI) Award, recognizing it as one of the 10 most significant achievements in film, and has been widely praised for its majority black cast and for addressing racism, colonialism and slavery.

However, what many people don’t know is that leading man Chadwick Boseman, who headlines as T’Challa/Black Panther (an African king who moonlights as a crime-fighter) was 41 when he rose to fame. This was largely due to his role in Coogler’s Marvel-tinted universe.

In a world of child stars and a race for early success, one might say Chadwick achieved fame rather late in life compared to his contemporaries. His story is one worth knowing because it can and should serve as an inspiration to people of any age, race, or background who happen to have big dreams.

Boseman grew up in South Carolina in a working class family. He eventually attended college at Howard University in Washington DC, graduating in 2000 with a Bachelor of Fine Arts in Directing.

But while studying at Howard in the late 90s, Chadwick and some of his classmates applied to the prestigious Balliol College summer theater program at Oxford University. The problem: they got accepted, but couldn’t afford to go.

However, one of their acting teachers, Phylicia Rashad of The Cosby Show, advocated on their behalf, as Chadwick told Rolling Stone. “She essentially got some celebrity friends to pay for us to go,” he said.

It wasn’t until after the program that he received a beneficiary letter informing him who had funded his attendance: the one and only Denzel Washington. Chadwick wrote Denzel Washington a thank you letter, but didn’t make the information public for 20 years. He didn’t want to tell anyone unless he became more successful.

Although he starred in several films and TV shows prior to the release of Black Panther, the latter carried with it just the sense of success that Chadwick had been waiting for. It was at the film’s New York premiere in 2018 that he finally got the chance he’d been waiting for to meet Denzel and thank him in person.

Upon their meeting, Washington reportedly joked about Chadwick being in his debt, saying, “Wakanda Forever, but where’s my money?”

A role that changed his life

Post Howard University, Chadwick made early TV appearances in episodes of Third Watch, Law & Order, and CSI: NY. He also played Jackie Robinson in 42, and James Brown in Get On Up, in 2013 and 2014 respectively.

But it wasn’t until 2016 that he began portraying the Marvel Comics character T’Challa / Black Panther, with Captain America: Civil War, his first film in a five-picture agreement with Marvel.

Chadwick has been vocal about how he made it

Perhaps the greatest thing about Chadwick’s achievements as an actor is how vocal he has been about the stories behind his success. He had a lot of real life experience, hard work, and struggle under his belt by the time he started getting the recognition he deserved, and this has worked in his favor, ultimately making him a star of substance.

At the 47th AFI Life Achievement Award tribute in 2019, Chadwick gave a moving speech about Denzel Washington’s influence on Black Panther, with a teary eyed Washington (who was there to receive the award) in attendance.

Chadwick thanked him, saying, “An offering from a sage and king is more than silver and gold. It is a seed of hope, a bud of faith. There is no Black Panther without Denzel Washington…My whole cast, that generation, stands on your shoulders. The daily battles won, the thousand territories gained, the many sacrifices you made for the culture on film sets through your career, the things you refused to compromise on along the way, laid the blueprints for us to follow…It is an honor to now know you, to learn from you, and join in this work with you.”

What better way to express the truth behind one’s success: that the picture is always bigger than one life, or one person’s trajectory—particularly when it comes to overcoming the odds in a traditionally white, male dominated industry.

Chadwick succeeded against all odds

Bonafide Boseman fans will be happy to know that there’s more in store. Chadwick stars in legendary director Spike Lee’s Da 5 Bloods, which was released on June 12th 2020. Also catch him in Ma Rainey’s Black Bottom, an upcoming drama by George C. Wolfe, based on a play by August Wilson, and produced by Netflix—although it was originally set to be produced by Denzel himself.

Yes, Denzel’s help was a tremendous factor in Chadwick’s road to success, but let us not disqualify his subsequent work as an actor and resilience in an industry that favors fame at an earlier age. Chadwick never gave up

Here’s to success at any age, and with any backstory—and to knowing how to appreciate the roots of one’s success—all while learning to be grateful for the ones who have helped us along the way. This is the kind of success the world needs now more than ever.