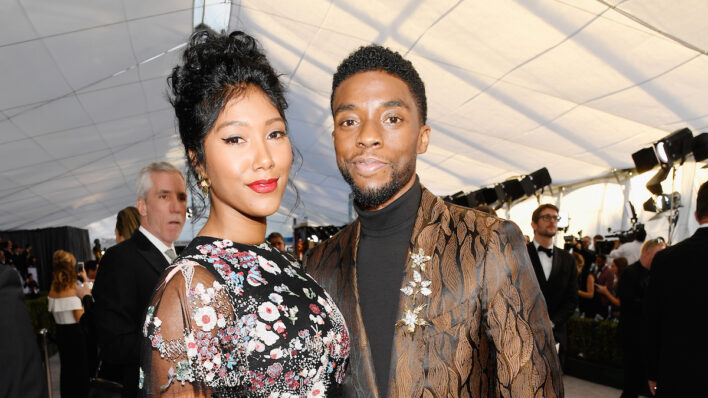 Why Denzel Washington Told Chadwick Boseman He Should Marry His Wife

Chadwick Boseman’s wife, Taylor Simone Ledward, was left picking up the pieces in the wake of her husband’s death. Here’s the truth behind their relationship.
By Shaoni Das    January 28, 2021

Chadwick Boseman’s wife, Taylor Simone Ledward, was left picking up the pieces in the wake of her husband’s death. Here’s the truth behind their relationship.

Chadwick Boseman’s death last year struck a devastating blow to the entertainment industry. He had played some notable roles in his short but stellar career, but unfortunately, it took his passing to get most people to appreciate his accomplishments beyond Black Panther.

A celebrity’s death usually generates a lot of press and public interest, leaving the grieving family members in a tough, precarious position. On the one hand, they have to respond to inescapable measures of sympathy and condolences, but they also have to deal with the increased scrutiny that accompanies the press attention.

Chadwick Boseman’s wife, Taylor Simone Ledward, was left picking up the pieces in the wake of her husband’s untimely death. While most people grieve privately, Taylor has had to represent the late Chadwick in industry affairs all while doing her best to stand tall and keep her husband’s legacy well and alive.

In order to appreciate how she’s been holding her head high amidst the pain and the spotlight, it’s necessary to chronicle her relationship with Chadwick. Apparently, an A-list celebrity has had a hand in solidifying their marriage…

Taylor studied Music Industry Studies at the California State Polytechnic University Pomona, where she graduated in 2014. She led the university’s jazz band and is known to be a brilliant singer in her own right.

The pair met shortly after her graduation. By 2015, paparazzi had caught photos of them traveling together at the Los Angeles International Airport. Though they were spotted by paparazzi here and there, Chadwick first acknowledged their relationship during an acceptance speech for Black Panter. While giving his speech, Chadwick gave her an adorable shoutout, to which she mouthed back, “I love you.”

Simone, you’re with me every day. I have to acknowledge you right now. Love you.

Over the years, she’s accompanied him at the major Hollywood events, including award shows, NBA All-Stars games, movie premieres, and more. Taylor’s sister confirmed the relationship on social media after a fan account suggested that Chadwick Boseman and his Black Panther co-star Lupita Nyong’o were an item. She said that Chadwick’s “real life queen is gorgeous, and together they embody true love.” She also added that they would make “beautiful babies” in the future.

The pair were rumored to have gotten engaged back in October 2019, three years after Chadwick was diagnosed with colon cancer. It’s unclear when the two of them tied the knot, but it’s been reported that they exchanged their vows in a super-private ceremony in Malibu.

Chadwick’s diagnosis just a year into his relationship with Taylor must have been a tragic moment on its own, but moving forward with the relationship, knowing that his life could’ve been over at any moment, was a true demonstration of strength from the new couple.

Moreover, the pair actually got hitched when Chadwick’s cancer was worsening and progressing into Stage 4. Their marital status meant that Taylor was able to become the administrator of Chadwick’s estate following his death. So she wouldn’t be left with nothing when her husband passed. The fact that Chadwick had the foresight as well as the optimism to marry her, knowing fully well that his health was deteriorating, is pretty remarkable — it was the ultimate expression of love that he could provide in his state. After all, love doesn’t care about timing or death.

The most extraordinary thing about Chadwick’s later years was that he chose to undergo treatment in secret. Only a few selected members of his team and family knew about his struggles with cancer. None of his co-stars, directors, producers, or cast knew about his diagnosis and just assumed that he was behaving as per usual. So strong was Chadwick’s dedication and passion for his craft that he wouldn’t let his health battles affect his roles.

Denzel Washington, Chadwick’s co-star in the 2020 film Ma Rainey’s Black Bottom, spoke about his experience of working with Chadwick while he was sick. He revealed that Taylor was an incredible caretaker for Chadwick on-set.

I used to watch how she took care of him, and I actually said to him, I said, ‘Man, you know, you need to put a ring on that finger,’ cause she kept her eye on him and she watched him. And I’m like, ‘Man, she loves that guy.’ You know, but I didn’t know what we know now.

Though they were a fiercely private couple, Chadwick and Taylor did express their love for each other in more than many ways. Sadly, it’s only after Chadwick’s death that we’re able to see these intimate and meaningful manifestations of love.

Taylor accepted an award on Chadwick’s behalf during last month’s Gotham Awards, where the late actor was posthumously given the Actor tribute award. She proceeded to give a beautiful, moving speech in which she only appreciated her love for Chadwick’s attributes as both an actor and a partner.

[Chadwick}] is the most honest person I’ve ever met […] And so, it became how he lived his life, day in, day out. Imperfect, but determined. Chad, thank you. I love you. I am so proud of you. Keep shining your light on us.

Your love doesn’t have to be public to be meaningful

Modern life has become so “social” that we believe that we have to document and showcase our love lives at every instance for them to become real or significant. Chadwick and Taylor didn’t abide by any of those rules; they lived their lives in privacy and dignity and still managed to show care for one another in deeply passionate ways. Your love is still valid and powerful, even if it’s behind closed doors and away from the cameras.

Furthermore, what we can do to express our love is cherish it to our heart’s content — you never know when tragedy is going to strike. All we can do is appreciate what we have and do our best to keep the happy moments coming.