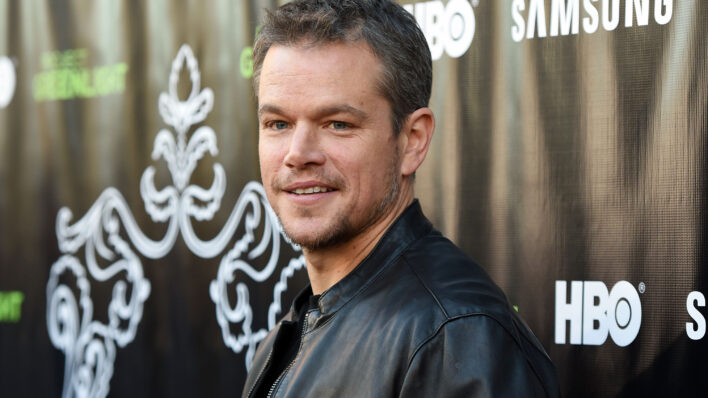 Actor, film producer and screenwriter, Matt Damon, is not only one of the highest-grossing entertainers of all time, but he’s
By Lindsay Tigar    March 27, 2019

Actor, film producer and screenwriter, Matt Damon, is not only one of the highest-grossing entertainers of all time, but he’s an outspoken family man. Originally from the Boston area — alongside best bud Ben Affleck — Damon’s long-lasting career has awarded him with many gold stars from the industry, including an Academy Award, two Golden Globes and more.

His rise to fame began in Mystic Pizza but really began to soar once he wrote and starred in Good Will Hunting. Since then, he’s performed in countless blockbusters, including Saving Private Ryan, The Departed, Manchester By the Sea and the Bourne trilogy, as well as the Oceans trilogy.

In addition to his stage acts, he also like to read between the lines, often sharing his latest page-turner. Because they inspire his writing and his directing, he turns to many books as his source of inspiration and creativity. Here, a few on his bookshelf that you could add to yours, too:

A People’s History of the United States by Howard Zinn

He’s not just a fan of this book — but of the author, since Zinn is an old friend. In an interview with The Hollywood Reporter, Damon explained why it’s a must-read not only for those hoping to learn more about the United States, but for Americans, most of all. “It gets people — particularly young people — excited about history because it’s your duty to be excited about it. You have a responsibility, as a citizen, to make history.”
>> SEE IT ON AMAZON.COM

If you’ve ever watched any interview with Damon (or his buddy, Affleck) — you’ll notice how they find a way to weave their hometown of Boston into a conversation. They’re proud — and not afraid to sing the praises. That’s partly why he loves this book. In fact, he wrote the forward for it! Here’s his handy wordsmithing work: “Running connoisseurs who sample marathons around the world will tell you exactly what my family has known for decades: ‘There’s only one Boston Marathon.’ And I think what you’ll learn from this book is that there’s only one Boston Athletic Association.Their history and the characters behind them make up another fascinating part of the history of sports in my hometown — and another reason I’m proud to be a Boston sports fan.”
>> SEE IT ON AMAZON.COM

The Martian by Andy Weir

One of Damon’s most memorable acting performances was based off this book, so of course, as the lead actor, he had to read it. In a conversation with Space.com (go figure), he discussed how the book spoke to him and informed his role. “The book does a very good job — he doesn’t go too deep into the weeds. At least, he doesn’t lose someone like me and I’m really a layman and that’s what we wanted to retain in the movie. We wanted it to feel like the science wasn’t beyond our capacity to understand,” he shared.
>> SEE IT ON AMAZON.COM

Another one of his breakthrough roles that audiences everywhere love to watch time and time again, Damon spoke about his experience paging through this legendary tale of conflict. “Nobody has ever seen this war examined in this way. I know when I saw it I had this visceral reaction to the combat because it doesn’t pull any punches. When people see it [the movie], they’ll walk away with a new appreciation for the people that were there and fought,” he told ScreenSlam.com.
>> SEE IT ON AMAZON.COM

Do you notice a trend here? When Damon sets to star in a film, he takes the time to read the book. Because it gives insight into the inspiration that provoked the author, he’s able to adapt his character more effectively. Even if hey, sometimes, it takes a little push to get him to focus. “They [the Coen brothers] we’re gonna do True Grit and I hadn’t seen the original movie. I said, ‘should I go watch the movie?’ And they said, ‘no, what  you should really do is read the book because it’s an American classic and everything’s going to be clear to you when you read the book. I got the book and read it, and I was surprised that I missed this book. I was an english major in college and I pride myself in being pretty well read, and it’s a terrific, terrific book,” he told Fox.
>> SEE IT ON AMAZON.COM