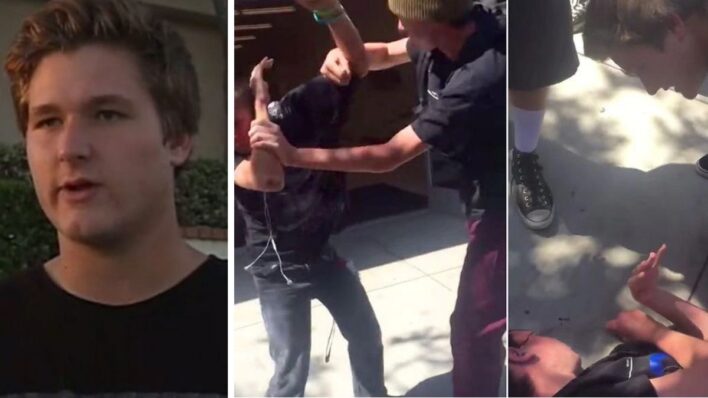 Cody Pine, a student who defended a visually impaired boy against a bully, faced potential backlash from his school for
By Bryan Liquor    May 6, 2021

Cody Pine, a student who defended a visually impaired boy against a bully, faced potential backlash from his school for stepping in, which prompted an outpouring of support worldwide.

It was lunchtime at Huntington Beach High School when footage captured a visually impaired child being bullied and assaulted by another student.

“I saw like a half-circle around a group of kids and I wanted to see what was up. I see this kid like getting wailed on by another kid.”

Suddenly, Grant’s step-brother Cody swooped in and knocked the bully down with a single punch. He then hovered above him asking why he was ‘jumping a blind kid.’

Shortly afterwards, police arrived and arrested the bully for misdemeanour battery and released him to his parents.

Meanwhile, the student who intervened was free to go, but wasn’t off the hook. Despite the footage and witnesses, the school said it would still investigate Cody’s actions, citing their ‘zero-tolerance’ policy on violence.

“The school is now responding to this isolated incident by interviewing students and witnesses to determine exactly what happened,” the district said in its statement.

The incident sparked an online petition that has gathered nearly 80,000 responses.

The petition stated that ‘while violence is never the best option what Cody did to defend his friend and classmate was justified.”

Commenters flooded the site with words of support.

“Great job! Our future is in good hands because of young men such as yourself.”

‘The day you punish people who protect the helpless is the day you’ve lost humanity. Don’t be STUPID!’ protested another.

“A lot of people are calling him a hero and I would as well for stepping in when no one else did and decide to just film it instead.”

It’s often hard to do the right thing, especially when everyone else is standing by. Courage comes with risks of harm or even job loss.

However, Cody decided that the biggest risk was standing by as a helpless friend was being abused. And while violence should never be celebrated, his acting to do what’s right should.