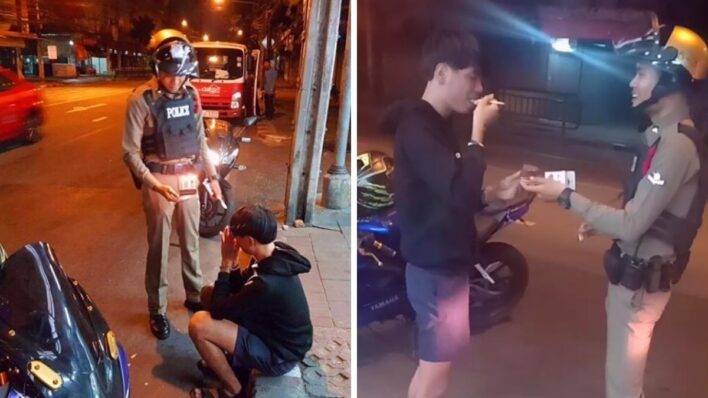 A young boy whose family forgot his birthday gets a celebration from the most unexpected source.
By Sophie Babinski    November 11, 2021

A young boy whose family forgot his birthday gets a celebration from the most unexpected source.

Sometimes, the best surprises come from the most unexpected sources. This was what happened in the case of a young Thai teenager.

Crying on his birthday

Police Lance Corporal Kanokpan Puttapong, of Thailand, was working his usual patrol shift when he came across a young boy speeding on his motorcycle. When he apprehended the boy to serve him with a ticket, the boy burst into tears. The police officer was surprised by this extreme reaction, and decided to investigate.

Corporal Kanokpan Puttapong used his emotional intelligence to get the young boy to open up to him about the reasons for his outburst. The boy explained to the officer that he had been hanging out at his brother’s condo with his family on his birthday, when he realized that the family had forgotten his birthday. He ended up taking off from the condo and going for a motorcycle ride to clear his mind. Unfortunately, his emotional outburst led him to go too fast on his bike.

After getting to know why the young boy was feeling upset and feeling sorry that he had been neglected by his family, the officer decided to step up and do something special to make this young stranger feel loved. He stepped away for a brief moment, asking the boy to stay where he was. When he returned, he had a bit of birthday cake in hand, so that at least someone celebrated the boy’s birthday. After being let off with only a warning for speeding, the boy thanked the officer for making him feel so special.

The kindness shown by the Thai Corporal was captured by onlookers and went viral. We are always hearing stories about unpleasant, even dangerous, interactions between young people and authority figures. The moral of this story is that small acts of kindness from authority figures can mend communities and uplift individuals. When those whose jobs are to protect us go out of their way to protect even our feelings, it inspires confidence and hopes for the future.