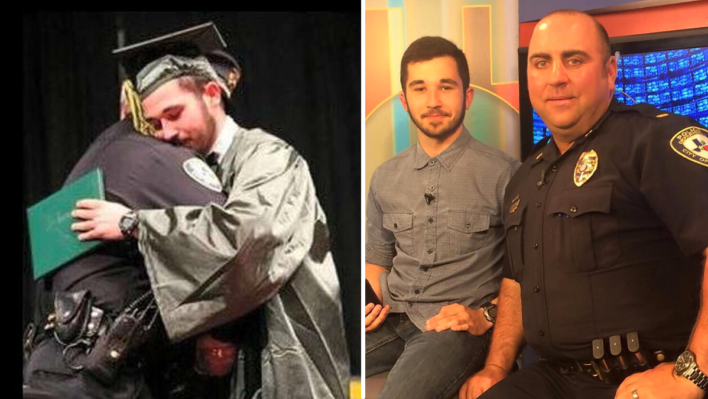 The officer had been one of the first responders on the scene.
By Heidi Hamm    November 20, 2022

The officer had been one of the first responders on the scene.

High school senior, Kazzie Portie, was less than a week away from graduation when his life took an unexpected and tragic turn — both of his parents were killed in a car accident.

The Texas couple were riding their motorcycle when they were struck by a drunk driver. Riley and Emily Portie died immediately at the scene. They left behind 5 children, including their youngest son, Kazzie.

Police officer Lt. Eric Ellison was one of the first responding officers to the crash, staying with the parents until paramedics arrived. He was then given the difficult task of breaking the news to the family.

Why a Police Officer Decided to Attend a Stranger’s Graduation

18-year-old Kazzie was home alone when Ellison delivered the devastating news. It was one of the hardest things he’d ever had to do in his 21-year career.

While the two sat together, Kazzie confided that he didn’t know what to do about his upcoming graduation. However, Ellison did.

“I said, ‘You are going to walk!'” Ellison told BuzzFeed News. “Your mom and dad will have front-row seats looking down from heaven, and I’ll stand in their place. I’ve got your back.”

Ellison added that he felt it was the ”right thing to do” after being the “bearer of bad news.”

He was true to his word.

How a Police Officer Made Good on His Promise

Even though Kazzie was grieving the loss of his parents, he heeded Ellison’s advice. When graduation day came, Kazzie was there.

However, he wasn’t alone when he took to the stage — someone special was waiting for him in the wings.

Ellison, dressed in his police uniform, watched from the sidelines as Kazzie received his diploma while his Little Cypress–Mauriceville High School classmates gave him a 40-second standing ovation.

And when he stepped off the stage? Ellison was right there to wrap the high school graduate in an emotional embrace. There wasn’t a dry eye in the stadium.

The powerful moment was captured on film and shared on social media where it quickly went viral.

How One Police Officer Proved the Importance of Showing Up

Seeing Officer Ellison waiting to congratulate him “meant the world” to Kazzie.

“It was so nice to see that he actually showed a genuine care for me and my family’s situation instead of us just being another ‘case,'” he shared.

Ellison, whose own daughter also graduated from high school just a day prior, said he was just doing what he “would want someone to do” if he “had left his girls early.”

Even though his parents weren’t there to watch him graduate, Kazzie said he knows they are proud of him.

Ellison obviously couldn’t replace Kazzie’s parents, but he did what he could to support a young man during an incredibly difficult time. He showed up. And sometimes, that’s the greatest gift we can give.