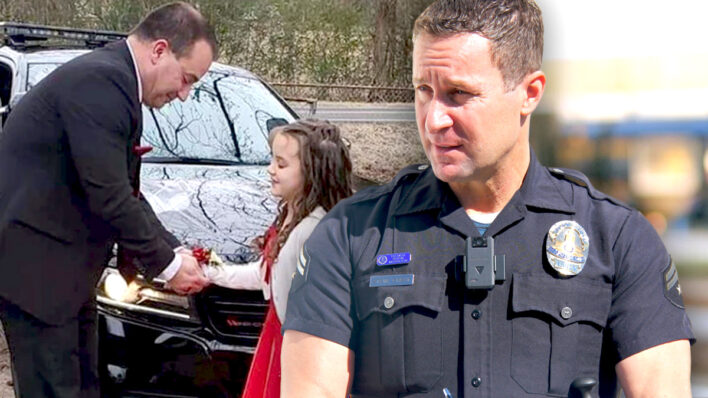 One police officer helped a second grader in an incredibly special way after she tragically lost her father.
By Amber Dowling    April 19, 2022

One police officer helped a second grader in an incredibly special way after she tragically lost her father.

Losing a parent is hard at any age. But when you’re younger and you lose a parent, it can be particularly tough because you know there’s so much you’re going to miss out on.

RELATED: Police Officer Sees a Homeless Woman Living in Her Car – And Helps Buy Her… a New House?

That was the situation one little girl faced in 2020 after she lost her father and didn’t have a date to her school’s father-daughter dance.

Fortunately, that’s when one kind police officer stepped up and volunteered his own time to give her an experience she never thought she would have.

According to an Arkansas CBS news station, second-grader Avey Cox always wanted to go to her school’s daddy-daughter dance. But after her father passed away a month earlier, she didn’t think it was in the cards for her and she had some pretty understandable FOMO knowing all of her friends were going.

“They were very close,” Cox’s mom, Angelia Bernard, told Today about her daughter’s late father. “Avey wanted to go to the dance but didn’t have anyone to take her.”

But then her mom received a phone call that completely changed everything.

Avey wanted to go to the dance but didn’t have anyone to take her.

A local police chief put out a call with his officers, asking if anyone wanted to volunteer and escort students without father figures to the dance in question. School resource officer Nick Harvey had a family and daughters of his own, but they had grown and he wanted to help another little girl make her own memories at the dance. So he stepped in and a guidance counselor at the school matched him with Avey.

“I reached out to the mother, the last thing I wanted was to get rejected by a second-grader,” Harvey told the news station. “Then the next day I formally asked if she’d be my date to the daddy-daughter dance.”

“I was excited because I never went and I had been wanting to go,” Avey said. “It meant a lot because I got to go and see all my friends there and then I got to go with them and have a lot of fun.”

Harvey was excited to take Avey to the dance, but he also wanted to make sure it was a night she’d never forget. So he and some of the other dads teamed up to purchase the girls pizza and a limo so they could travel in style.

“I bought a new tie and handkerchief to match Avey’s dress and I ordered a corsage,” Harvey also told Today. “Every time I saw her at school, she’d remind me of how many days it was until the dance.”

I love my job for so many reasons. But reasons like this make my job the best job for me.

Later, Harvey also shared highlights of his night with Avey and the other dads on Facebook.

“Tonight, I had the absolute honour of escorting this amazing and beautiful little girl, Avey, to the Daddy-Daughter Dance,” Harvey wrote after the big night. “We had so much fun riding in an awesome limousine, eating dinner, and letting loose and being goofy. We danced like we just didn’t care and got to spend time with friends and other dads. I love my job for so many reasons. But reasons like this make my job the best job for me.”

After the dance, some of the parents and daughters, including Harvey and Avey, went out for ice cream to talk about their fun night out. From the sounds of it, it was an experience both of them will remember and cherish for the rest of their lives.

Avey keeps saying it was the best night ever.

Harvey noted he hopes to be able to take Avey to future dances, and they’ve since bonded from the entire experience. “I know she’s not my kid, but for a couple of hours, it felt like she really was. I even got to twirl her,” Harvey added to Today. “We’ve really become best friends through all this.”

“It was such a bright spot in the hard month we’ve had,” Bernard also revealed to the publication. “Avey keeps saying it was the best night ever.”

Harvey has three daughters of his own, and he’s done his share of daddy-daughter dances. So he didn’t have to volunteer his time to take another little girl to the dance – especially since he himself admitted he’s not the most comfortable of dancers. Yet he knew there were little girls out there who might not ever get to experience that kind of moment with a father figure for a variety of reasons.

It’s no surprise the moment went viral on social media and was picked up by so many news outlets: it’s not just a nice moment, it’s also a motivational one that reminds us all just how much the gift of time can mean to someone else.

RELATED: Son Searches For His Lost Dad for 30 Years – Until a News Report Changed Everything

There are tons of ways to volunteer our own time in our everyday lives, too. In Canada, Big Brothers and Sisters of Canada is always looking for volunteers to spend time with youth who don’t have traditional family units, for example. But retirement homes, local sports teams, and other youth-oriented programs are always looking for volunteers to help make a positive impact on a young person’s life.

Volunteering may only cost you a few hours of your own week, but the amazing impact it can have on another person’s life could potentially last them a lifetime.

make a positive impact
“Volunteerism is the voice of the people put into action. These actions shape and mold the present into a future of which we can all be proud.” – Helen Dyer