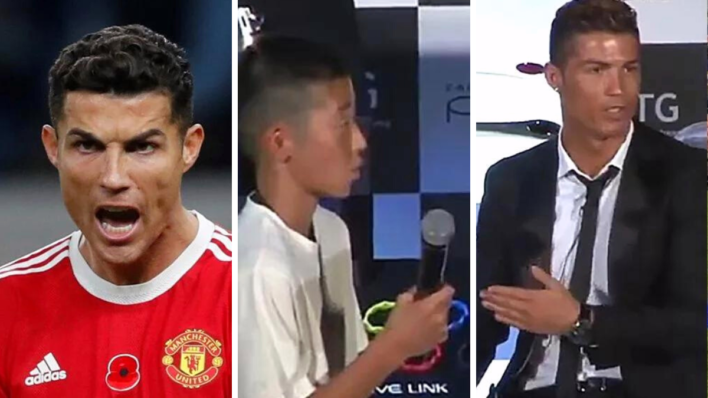 When a soccer legend defended him and shared some inspiration, one boy followed it to glory.
By Bryan Liquor    August 5, 2022

When a soccer legend defended him and shared some inspiration, one boy followed it to glory.

It’s every little boy’s dream to meet their favorite athlete, yet few do. But as he stood rehearsing in his room, Ryota Iwaoka’s dream would soon become a reality.

The Japan resident was one of only three lucky winners randomly chosen by a lottery to ask any question to none other than soccer superstar Cristiano Ronaldo. According to Sora News24, the Premier League striker would be in the country to promote a skin care product, and the lottery was held to create a buzz.

RELATED: Woman Asked Out On A Date By Childhood Bully Gets Ultimate Revenge

His father suggested that it would be nice to ask Ronaldo the question in his native language of Portuguese. The boy agreed and would practice for hours asking the question in a language he had no idea how to speak.

Iwaoka could never have imagined — or wanted — what would happen when that day came.

Why Soccer Star Cristian Ronaldo Stood Up for a Bullied Boy

When the day arrived and it was Iwaoka’s turn, the boy stood up nervously. Anyone in his shoes would, let alone asking a question in a language they have never spoken.

Despite stumbling over some words, he pressed on. The whole time, Ronaldo looked at the boy smiling and nodding, to show he understood.

RELATED: Teen Gets Bullied For Being Gay, Fights Back And Gets Outpouring Of Support

However, as the boy stammered, some reporters in the crowd started giggling at his accent. That’s when the Manchester star came to his defense as he turned to the reporters.

“Why they smile? You speak good Portuguese. Very good. They should be happy because you tried very hard,” he said.

Upon hearing that, the crowd started applauding, and Ronaldo returned to the boy’s question.

His question was: “You are my favorite player and I want to play alongside you. So, how can I become a professional?” That’s when Ronaldo gave him priceless advice.

Believe in yourself. Work hard, and don’t miss an opportunity when it comes.

It would be years later, but those words gave the boy motivation to reach greatness.

Iwaoka continued to work very hard at soccer in high school. Yet, it wasn’t until his third year that he saw any playing time.

When his team qualified for the national championships, it gave Iwaoka a chance to play. He made the most of it, earning important minutes during his team’s playoff push.

“I thought I would have the chance to prove myself in these three games and get to the championship I dreamed of. I believed in myself and I played with all my heart,” he said.

RELATED: Dad Confesses To Daughter He Was a Bully – Feels Inspired To Apologize to His Victim 20 Years Later

His belief in himself paid off, as he played a key role in his team’s success in winning the championship. Now, all the laughs gave way to loud cheers.

“We became the best in Japan!!! I was able to win the championship thanks to the people who supported me for the past three years and those who attended the tournament safely. It was great to play with my friends,” he said.

How One Boy Proved the Importance of Ignoring the Haters

Iwaoka continues to pursue his dream of being a pro and one day playing with Ronaldo. At this point, is there any reason to doubt him?

Nobody said that being teased is fun. Teasing can take dreams and coldly crush them. But it can also be fuel to prove the haters wrong.

In the end, you can’t avoid criticism when you’re in the limelight. However, with friends who will stick up for you and your dreams, it can be motivation to hit new heights.