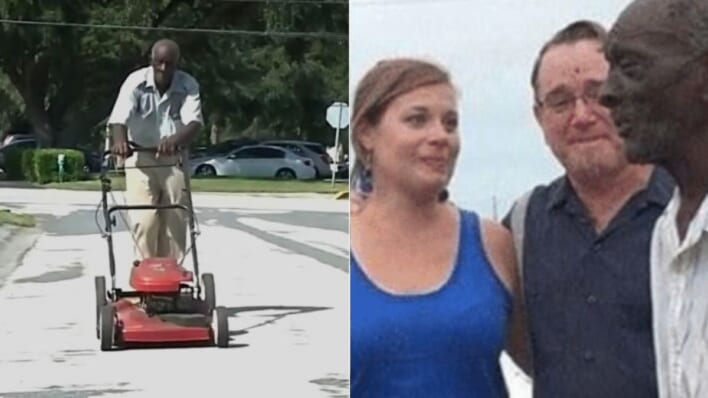 When they realized he had been walking for miles every day to mow their lawns after his truck broke down, John Joyce’s customers replace it.
By Sophie Tolias    October 5, 2022

When they realized he had been walking for miles every day to mow their lawns after his truck broke down, John Joyce’s customers replace it.

There are certain special people in this world who are so dedicated to their work, there isn’t anything that can get in their way. This is the case for 83-year-old John Joyce. He makes sure all 20 of his customers get their grass cut. Rain or shine, John walks six miles, pushing his lawn mower and leaf blower with him, to get the job done.

John Joyce’s Vehicle Broke Down and He Kept Moving

When the transmission on his 21-year-old truck broke down, Joyce refused to give up doing the job he’s been doing for the past 20 years: mowing lawns. Despite bad knees and mild arthritis, Joyce pushed his lawnmower and equipment several miles every day to carry out his commitments.

Robert Norton, Joyce’s customer of eight years, asked him why he still came after his truck broke down. He responded by saying, “If I don’t cut the grass, it’s going to grow, Robert!”

“John is the kind of guy you just want to hug,” Norton told Today. “He is a simple man with a strong work ethic and a heart of gold.”

The 83-Year-Old Floridian Touches Hearts With His Dedication

One day, Joyce walked three miles to Norton’s house to ask for $5 to fill his lawn mower with gasoline. Impressed with Joyce’s dedication and work ethic, Norton, 51, gave him $20 and told him to keep it.

“He’s such a hard worker and always so loyal to us,” Norton explained. “I wanted to do something more for him.”

That’s when Norton went to his wife, Nikki Norton, with the idea to buy him a new truck They set up a GoFundMe page which raised over $13,000 in a few weeks. It was enough to buy Joyce a truck from a used car dealer and pay his insurance for a year. He also received a $1,000 Home Depot gift card, which he used to buy a new lawn mower and other tools.

RELATED: Young Boy Surprises Parents and Gives Up Hoverboard For Christmas To Cheer Up Grieving Orphan

Joyce, ready to cry, couldn’t believe his eyes when they surprised him with his new pickup truck at the dealership and was grateful to his loyal customers.

“I think it’s wonderful,” John said, beaming. “There couldn’t be anything better… I feel like a millionaire.”

Norton said the day was filled with such demotion. “I’m happy to have been able to help out such a nice guy.”

The Powerful Feeling of Caring for One Another