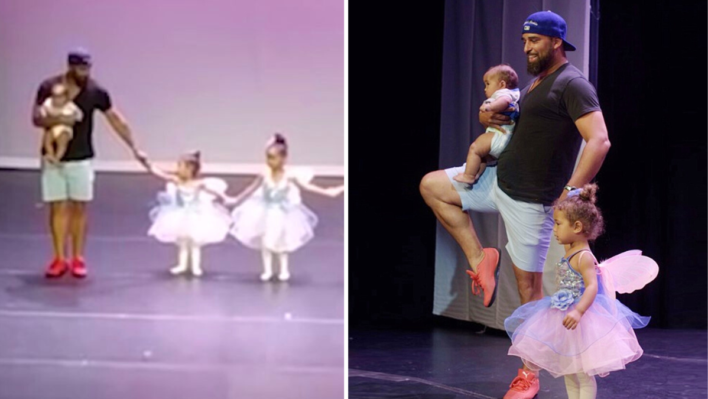 Seeing his little girl in distress, one dainty dad threw on his cape and took the stage with his sidekick to save the day.
By Bryan Liquor    October 27, 2022

Seeing his little girl in distress, one dainty dad threw on his cape and took the stage with his sidekick to save the day.

There aren’t many moments more special to a father than watching his daughter’s first dance recital. It’s a magical moment to watch her spread her wings and shining on stage.

So you can bet that Marc Daniels was fixed on his 2-year-old daughter Bella’s every move during her rehearsal at the Hamilton City Hall in Bermuda. Then all of a sudden, crisis hit.

Stricken by stage fright, Bella was having a full-blown meltdown. At one point, she stopped and sat on stage sobbing while the others danced.

Then, in the knick of time, her super dad came to the rescue!

How One Father Sprung Into Action to Save the Day

As if on cue, emerging from backstage was none other than Daniels racing to Bella’s side while holding his youngest daughter Suri. He had been called to the wings to calm Bella down and rushed to the rescue.

Daniels recalled the moment of motivation to the Daily Mail.

“I walked on holding Suri and stood next to her, trying to help build her confidence — I told her I loved her and that she’s an amazing dancer,” Daniels said.

“I asked if she wanted to dance with daddy and she nodded, so I thought I’d join in.”

He then took Bella’s hand and showed the crowd some fancy footwork. With an array of spins, Daniels was a natural as the crowd clapped and giggled. He credited getting in plenty of practice with Bella for his dazzling moves.

At one point, a stagehand offered to take baby Suri from Daniels, but he kept her at his side.

As the piece ended, Daniels and the others shuffled on stage, while Bella stood crying. Good thing her dad knew what she’d need.

“Bella was very emotional and needed hugs from her daddy,” he said.

How One Sweet Father Protected His Little Girl

When he isn’t superdad, Daniels works as a self-employed barrister. He joked that his ballet skills have made him a hit at the courthouse.

“Jurors, police officers, and members of the prosecution have even been giving me twirls and plies as a token of appreciation for the video,” he said.

With his success, Daniels hasn’t ruled out rocking a tutu full-time, saying, “Maybe it’s never too late to become a ballerina!”

There are two timeless truths about a father and his little girl. One, his heart melts when she’s smiling. Two, his heart stops when she’s crying (and if you think a daughter ever outgrows being ‘daddy’s little girl,’ think again.)

At the first tear, one father sprung into action to let his daughter know that everything was okay.

Because of that, one little girl will have the self-esteem and strength to get up and spread her wings knowing that her dad is right there to lift her up if she falls.