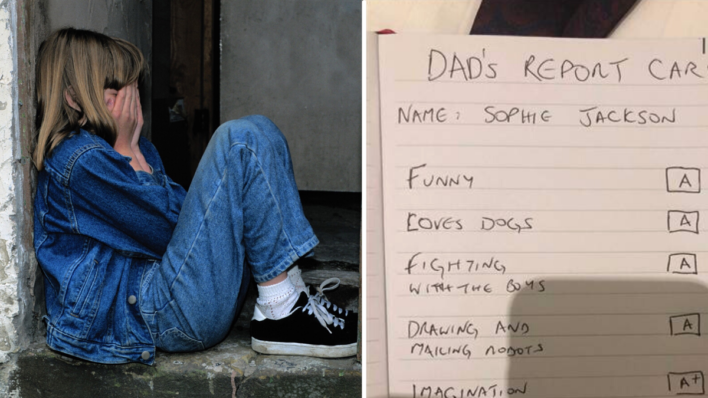 One father had the best response to his daughter’s report card.
By Amber Dowling    August 5, 2022

One father had the best response to his daughter’s report card.

Seeing your child work hard for something and not quite achieve it can be devastating to a parent. And when you parent a child with special needs, that situation can be even harder to watch. After all, all parents want their children to succeed, especially when they have their hearts set on something.

Perhaps that’s why Shane Jackson’s response to his autistic daughter’s report card has gone viral, and why the story behind it is resonating with families around the world.

How a Dad’s Sweet Gesture Lifted His Daughter’s Spirits

The Tasmanian based dad was traveling for work in 2018 when his 10-year-old daughter Sophie Jackson brought home her fourth-year report card filled with Ds. “She cried and said, ‘I’ve let everyone down,’” Jackson shared on Twitter at the time.

Jackson felt bad and he wished he were there to help, so he crafted a plan to show his daughter how loved she is. He whipped up his own report card based on characteristics he loves about his daughter. Things like loving dogs and being funny, drawing and making robots, and of course her imagination. On that report card, Sophie received straight As.

RELATED: Bullies Who Always Excluded Kid With Autism Are Stunned When He Confronts Them In Front Of Everyone

“Sophie and my partner were so upset, mainly because she had tried so hard,” Jackson wrote in a reply.

It was all I could think of to help the situation, and it worked.

In an interview with the Daily Mail, Jackson said his daughter lit up after seeing his report card. “The best impact has been on Sophie. Next day she bumped out of the house, beaming, ready for school,” he said. “As a parent of an autistic child, I’d like to tell other parents that they are not alone as I understand it can get challenging.”

Since Jackson put up the original post, it has been retweeted more than 12,000 times and liked more than 60,000 times. Multiple outlets picked up the story as well, shining a light on the inspiring family.

Jackson explained to the Daily Mail the positive response online has been heartwarming, but he also wants people to know his post was in no way meant to target the teachers at his daughter’s school.

“This is in no way against any teacher. Sophie has a fantastic teacher,” he added. “There’s a marking process, according to which Sophie did well.”

Online, the dad continued boosting his daughter though and following the large reaction by the community he even started and shared a Twitter account for Sophie where she could share her amazing artwork. “She would love it if you follow and like,” he added.

How a Dad Taught His Daughter to Keep Trying Despite Failure

While so many people online seemed to resonate with Jackson’s parenting style and found motivation for their own family situations, even more people commented on how Jackson found qualities to compliment his daughter on that were far more important than school grades.

It’s a nice reminder to ourselves as parents and as human beings as well. We may not always be the smartest, prettiest, or funniest person in a room. And not all of us will always win or nab top marks.

RELATED: Autistic Girl Has Higher IQ Than Einstein And Is Completing 2 Engineering Degrees

But at the end of the day what matters most is our hearts and attitudes, and how we approach this thing called life. As parents, it’s something to instill in our kids when they try hard and still don’t succeed, but it’s also a gentle reminder when it comes to the way we speak to ourselves.

Everyone’s idea of success is different, but at the end of the day if you feel good about who you are deep down and know you have people to love and who love you… well, that can feel like the most successful life of all.