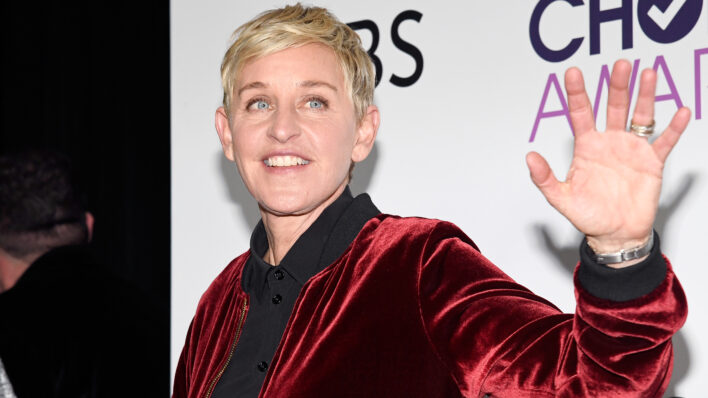 5 Daily Habits to Steal from Ellen DeGeneres, Including How She Uses Her Struggles as Fuel

As a digital nomad and journalist, I travel the world while logging around 70 articles a month. To effectively manage a
By Lindsay Tigar    February 25, 2019

One of the most iconic comedians of our time, Ellen DeGeneres has been making audiences around the world laugh for decades. From her first sitcom named after her moniker that ran for fours years, to her syndicated television talk show that’s been topping the charts for 15 years, DeGeneres has a way of breaking down boundaries and inspiring households In addition to her popular hosting—both of her own show and many award seasons — she also took home Saturn Award for Best Supporting Actress as the voice of Dory in ‘Finding Nemo.’

As a stand-up comedian since the 1980s, this actress, writer and producer has used her sharp wit — and kind heart — to fight for LGBT rights and empower others to be who they are. She famously came out publicly for the first time on ‘The Oprah Winfrey Show’, and has been outspoken about her lifestyle ever since. Married to the love of her life, Portia de Rossifor a decade, she often speaks about their life together, helping to open the minds of Americans through the silver screen.

As if she’s not busy enough, DeGeneres has also written four books and started her own record and production company. Did we mention she also has a product line of apparel, accessories, home, baby and pet items. And if you’re keeping count, she’s also taken home more People’s Choice Award than any other person, with 20 under her belt — and she’s won 30 Emmys. President Barack Obama also awarded her the Presidential Medal of Freedom in 2016, to honor her activism within the LGBT community.

Though she gives much away on her show, DeGeneres is estimated to have a networth in the $450 million ballpark — and it’s only growing. Here, a few of her habits that you may want to adopt in your day-to-day.

She lives her life without shame.

As one of the first actors to proudly come out as a lesbian, DeGeneres has adopted a no-shame mentality toward who she is — never apologizing and never discounting herself. As she told ABC News, “When you’re gay and successful in this business, your whole team says ‘Don’t rock the boat. Keep it down.’ I just thought what’s equally important as my career is living my life without shame and so I just wanted to get rid of the shame.”

Though she says plenty of actors fear their sexual identity will prevent them from work, it was a risk DeGeneres was willing to take to live her life honestly. “The fear is that you’ll lose your career — and I did for awhile. Three years seemed like forever. It seemed like I didn’t have any money left, I wasn’t getting any jobs, I didn’t have anything,” she continued.

But then of course, everything changed and the industry shifted, allowing DeGeneres to be a game-changer. Not only could she be authentic, but audiences valued her perspective and her welcoming nature. In a Tulane commencement speech, she shared that’s what life is about: “For me, the most important thing in your life is to live your life with integrity and not to give into peer pressure to be something that you’re not, to live your life as an honest, compassionate person, to contribute in some way.”

She uses her struggles as fuel.

You know how the saying goes — without failing, we can’t appreciate the wins when they happen. While some people get knocked down by the naysayers, the rejections and any other struggles they have, the most successful (and frankly, resilient) of professionals are able to pick themselves up — and use that stress to their advantage. DeGeneres says the best comes from the worst. “…If you’ve experienced something, you shouldn’t hide some kind of try… I think people read truth and authenticity and that’s the most important thing for establishing anything,” she shared at Talks at Google.

Much like the famed quote from her ‘Finding Nemo’ character — DeGeneres says she just had to keep swimming. “My life has been a lot of challenges and a lot of different curves and roadblocks so I think that’s a great — I didn’t come up with ‘just keep swimming’ — but it’s something a lot of people can hold onto in their life.”

She’s not afraid to go after what she wants.

When she came out on the Oprah Winfrey Show as a lesbian — everything in her world changed. And not for the better: ratings plumented, and her show was soon cancelled. She returned to stand-up comedy and had plenty of ebbs before she found her flow. DeGeneres always stood by her decision to come out because she felt it was important for her, for society, for the world. This fearless attitude is what has gotten her through many hurdles, and it happens to be one of her philosophies. “I can’t believe that I was able to achieve what I achieved, lose it all and then get to this point in my life at 60-years-old. To start over at 45. Nobody starts over in this business at 45, much less a woman. I’m really grateful that I had that experience and it made me a stronger person,” she told Armchair Expert.

She tries not to let any worries — about what people think of her, about finances, about pride — get in the way of what she sets out to achieve. “I am always going to just get what I want, I’m going to do what I want. Because I know there is an abundance and I will always have enough. That’s how I live my life. You shouldn’t live your life in fear of money,” she shared.

Even though she told Good Housekeeping she’s not an activist or a political person, she does name herself a person with compassion: “I care passionately about equal rights. I care about human rights. I care about animal rights. Above all, I strive to be the best I can — to be better than I was yesterday and better tomorrow.” And when it comes to comedy, she doesn’t believe in laughing at someone else’s expense, since she considers that bullying. She told Sunday Morning, “I want to be an example that you can be funny and be kind and make people laugh without hurting somebody’s feelings.”

She’s honest with herself — and others.

On the forefront of everything she believes? Honesty. For herself. For others. It was something she learned when she came out in a public way, “The whole world was talking about me. You know, if you’re going to be honest with yourself, you have to admit that you go into show business wanting people to talk about you and wanting everyone to know who you are,” she shared with Oprah magazine. “But that also means there are going to be a whole bunch of people who don’t like you. No matter who you are. I’m sure there’s somebody out there who doesn’t like Betty White because she’s short and has white hair.”

As for DeGeneres, leading her life genuinely was never a choice as much as it was the only way she could imagine moving forward. “I mean, you get used to living with secrets, because I did. There are people out there hiding all kinds of things. People who have all this success and all this fame and all this money, and yet there are secrets that they think if we found out about, it would be over for them. And it’s a horrible way to live whether you’re famous or not,” she shared with Good Housekeeping.

“…Simply my saying I was gay — even though I was the exact same person — divided everyone. People stopped watching the show, so some advertisers pulled out…But losing it all really gave me time to realize that all this stuff is very fleeting. If success is really dependent on someone liking you or not liking you, and you have to teeter on that kind of tightrope of how you’re supposed to act and how you’re supposed to look and who you are, it’s just not a healthy way to live. Now I get to be me every single day and not have to worry about hiding anything at all.”