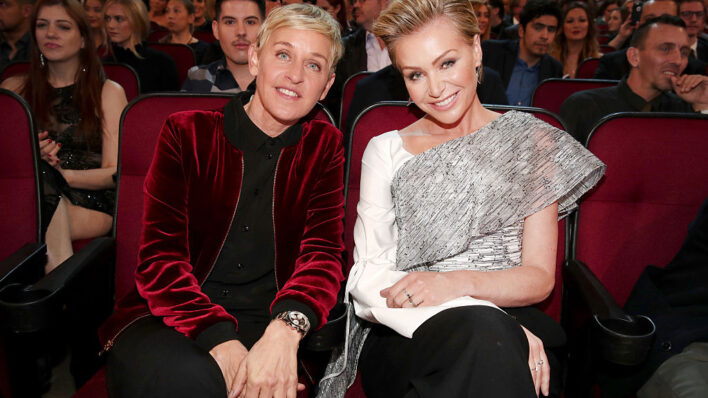 Relationship Goals: How Ellen and Portia Prove that Love Does Conquer All

She was part of the ensemble cast of one of the most famous TV shows ever made, playing a tough
By Eliza Theiss    August 17, 2018

She was part of the ensemble cast of one of the most famous TV shows ever made, playing a tough lawyer on Ally McBeal.

And she was a comedian, actor and the first major Hollywood figure to come out as gay.

Both Ellen DeGeneres and Portia de Rossi saw their careers wane and struggle following their coming out. But as American attitudes towards the LGBTQ+ community finally started evolving, their careers started picking up again.

For the power couple, love took center stage by the mid-aughts. As they celebrate a decade of marriage, we look back at all the ways their story makes us believe in true love and what it takes to fulfill your dreams.

Why Ellen and Portia are a power couple

At 60, Ellen DeGeneres is the queen of TV talk shows, hosting the eponymous The Ellen DeGeneres Show on NBC since 2003. But before becoming the face of fun, family-friendly television, Ellen was a struggling stand-up comedian in the early ’80s.

The Louisiana native proved to be a captivating presence and scored not one, but two sitcoms that bore her name. Then, in 1997, on the fourth season of Ellen, she did what had never been done before: she came out as a lesbian both in real life, speaking to talk show goddess Oprah Winfrey, and, reinforcing her commitment to her values and activism, had her character come out as gay on her show as well.

That move sent shockwaves through Hollywood, the media and American audiences. The tabloids descended, and her career suffered. Moreover, depression struck. Her mother struggled at first, but has since become one of her staunchest supporters.

Meanwhile, Portia’s marriage to Mel Metcalfe ended in divorce and she started dating director Francesca Gregorini. The tabloids found out and Portia’s private life was plastered all over the media. Her Ally McBeal coworkers found out from those rag stories. This came at a time the Australian native was struggling with eating disorders – anorexia and bulimia plagued her for four years.

Then, in 2004, the world realigned for both women when they met backstage at a VH1 awards show. Although Portia had initially declined to discuss her sexuality, the steadiness of her relationship with Ellen provided her the strength and confidence to open up to The Advocate. And while her long-lasting relationship with Ellen also proved ripe tabloid fodder, the outside world and the often seedy commentary could not break their bond.

For 14 years they’ve inspired us with their love

While California’s legalization and then ban of gay marriage reverberated throughout the country, for Ellen and Portia, just like for so many other LGBTQ+ couples, it had a very personal stake. Establishing their relationship as a family in the eyes of the law was important. Getting married was important. For Ellen, marriage “is everything,” as she told People.

For Portia, dating and then marrying Ellen came with an extra set of hurdles and life lessons. She may have been tight-lipped about her previous relationships and her sexuality before, but dating the most famous gay woman in the world came with a lot of attention and the necessity of leading a public life – something that can be quite daunting.

“It’s hard having a relationship that’s public. It’s hard living a life that’s somewhat public, and hard when you put that life together with someone who is famous and so loved and admired,” Portia told The Advocate. On the other hand, dating the most loved TV talk show host comes with its perks. “It’s also real exciting,” she added.

After all, Ellen has been a leading figure in the LGTBQ+ community since coming out 21 years ago, taking on a role of advocacy – and her work is definitely something Ellen’s wife admired from the start. “She was so courageous and so loud in ’97,” Portia said, expanding on her admiration with “She’s changing the world, she really is, and it’s exciting to be a part of that.”

Then again, Portia admired Ellen from the moment she met her, way back in 2000. That first meeting hinted at the bright future that would come without either recognizing it. Portia never stopped thinking about Ellen, sensing a special energy from her that was completely new. Seeing Ellen again in 2005 took Portia’s breath away. And since third time’s a charm in every fairy tale, that third meeting at the VH1 awards started the inevitable.

In fact, it was rumored that they moved in together just two weeks after the show, and by the end of 2004 they were happily living together either in L.A. or escaping to a recently-bought ranch.

When the California Supreme Court struck down a ban on same-sex marriage, Ellen announced a frenzied audience on her show that they were nagged to be married, tying the knot in a very intimate ceremony.

Of course rumors of pregnancies and children became a regular thing, until the couple officially announced that their family plans did not include children. They do however include lots of rescues, advocacy and a dizzying amount of charity work. In fact, the couple’s work has brought them ample appreciation for their wide-ranging charity efforts, topped off by Ellen’s 2016 Presidential Medal of Freedom.

Not only are Ellen and Portia the most high-profile lesbian couple in the world, but both now boast established careers in entertainment and business. But for this power couple, it’s all about love and togetherness.

Their careers may be brimming with possibilities, but their main focus is each other. “Being her wife is the greatest thing I am,” Ellen shared on Instagram on their nine-year anniversary, while Portia told People that marriage “is not something we’ve ever taken for granted.”

And that commitment to each other and their relationship is their biggest lesson. They may have initially planned on a big wedding, but they decided in favor of small ceremony at home, where they have always been the happiest. Just the happy brides and 19 friends and family—and, of course, their rescues. That quiet family life is what Ellen and Portia value the most about their relationship.

“I can’t imagine not being married. I have my best friend, the person I want to spend time with more than anybody else in the world,” Ellen told People in a 2016 interview. Marriage brought not just love, but a sense of being happily settled. Not stuck in a routine settled, but finding your spot in the world settled. Adding, “There’s an anchor, there’s safety. I’m going to be with her till the day I die, and I know that.”

Their secret? “We’re just really good friends and we talk about everything, and we never ever, ever lie to each other, like, not even the tiniest lies, Portia told E!News. Being married to your best friend also really helps. “She is my best friend and I just want to be with her all the time,” she added.