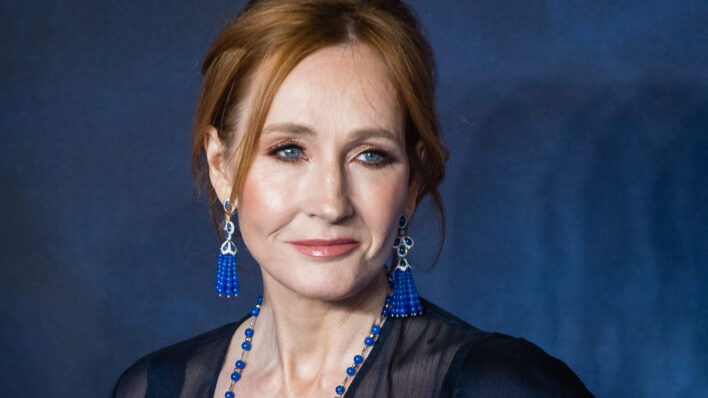 5 Daily Habits to Steal from J.K. Rowling, Including Her Commitment to Self-Development

As a digital nomad and journalist, I travel the world while logging around 70 articles a month. To effectively manage a
By Lindsay Tigar    December 19, 2018

While there are an endless number of writers — and those who aspire to be — there are very few who became a household name. In the past two decades, J.K. Rowling has become one of the most renowned authors of our time. And perhaps, one of the most enamoured female wordsmiths in history. Though she is a novelist, philanthropist, film and television producer and screenwriter, Rowling is best known for the best-selling book series — ever — selling more than 500 million copies worldwide.

It was during a tumultuous seven years, following the birth of her first child, the death of her mother and a difficult divorce that she came up with the concept of Harry Potter. While rejected countless times, when the first book was finally published, she was living on state benefits.

Now, she is the world’s first billionaire author, and was a runner up to Time’s Person of the Year in 2007. In 2010, she was also honored at the Most Influential Woman in Britain, and today, has an estimated net worth of $1 billion. Even with all of this fame, she remains humble, donating so much to various charities (and starting her own!) that she let go of her ‘billionaire’ status to help others.

It definitely takes diligence and determination to become such an impactful, pivotal person in history, and these routines, mantras and rituals are what Rowling thrives off of. Perhaps, you can take a few of them to heart yourself.

She focuses on self-development. 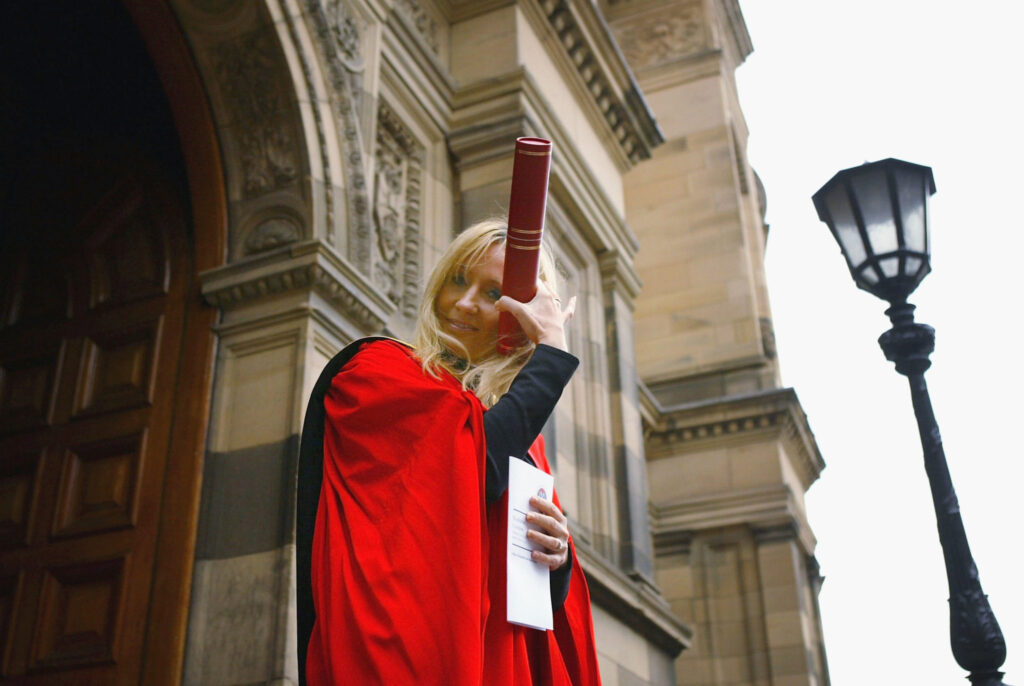 You don’t go from trying to survive on a few dollars to cementing your position in literacy fandom without some major courage. That, and a healthy dose of self-care and self-awareness. Those who are continuously aim to become better, smarter, stronger humans usually receive the fruits of their labor, and Rowling is living proof.

This often means allowing life to take it where you’re meant to be, and taking all that you can from the experiences along the way. While addressing Harvard graduates, she explained: “Personal happiness lives in knowing that life is not a checklist of acquisition or achievement. Your qualifications, your CV, are not your life.”

She thrives on failure. 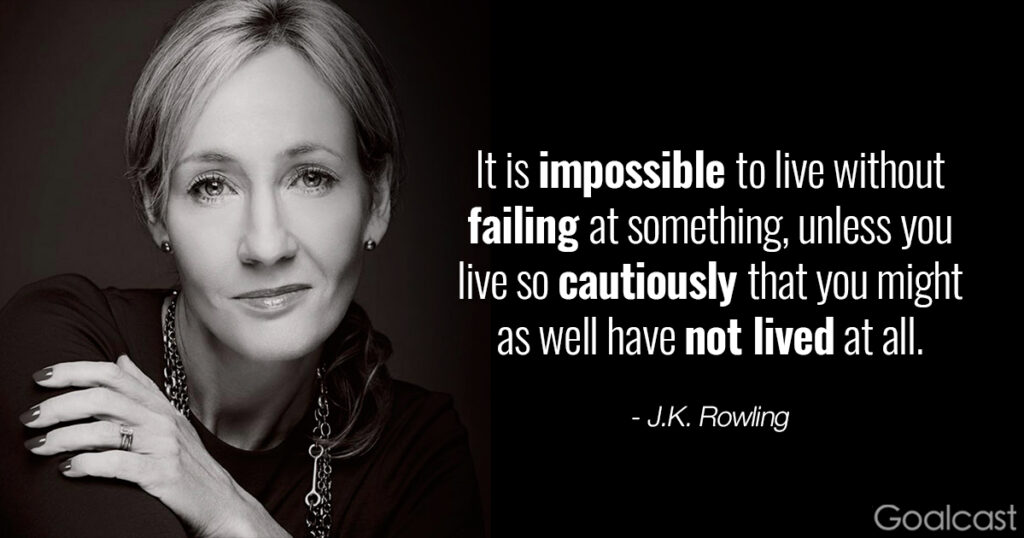 As any writer — or professional in a creative field — will share, criticism is part of the job description. Frankly, no matter what industry you set your sights on, it’s important to develop a sturdy back bone and to allow feedback to guide your work, instead of making you doubt yourself. Rowling believes in the power of failure and welcomes the challenge. In the same Harvard commencement address, she shared this nugget of wisdom: “It is impossible to live without failing at something, unless you live so cautiously that you might as well not have lived at all — in which case, you fail by default.”

The thing about failing is once you actually do succeed — nothing feels sweeter. Going through the many pitfalls makes that climb to the top worth every last drop of sweat or tear. “… you know I was not confident then at all. But I wanted it so badly, I wasn’t going to give up. And I don’t think I’ve ever felt, before or since, anything like the elation of realizing I was going to be published,” she told The Guardian.

Self-made millionaires — or in Rowling’s case, billionaire — have a different perspective toward finances than those who grew up wealthy. Because they earned their impressive income, most remain rather humble, no matter how many zeroes they add to their savings account.

In fact, she shared with Oprah that she still has trouble accepting her new lifestyle, and all of the securities that come with it. “Yes, I know now that I will be rich forever. That hasn’t kicked in. When I was pregnant with my son, I went through a real worry about money that was completely irrational, and I think that was related to stress — I had a book coming out, and a baby on the way. I think it was a flashback to the last time I had been pregnant, when I really was poor. I reconnected with the self who was panicking she wouldn’t be able to clothe the baby,” she explained.

She donates regularly to One Parents Families, Multiple Sclerosis Society of Great Britain and Comic Relief. She also started her own non-profit, Lumos, to help end the institutionalization of children worldwide.

She keeps her skin thick.

Since criticism is part of the game, Rowling doesn’t let too many things get to her, and keeps her attitude fresh and focused. In fact, she doesn’t expect to be given all of the kudos, but rather, is accepting of helpful tips. “If you expect to stand under a shower of perpetual praise, there’s something wrong with you. You will get criticism and I knew that going in. The funny thing is I’m not a particularly — I was never a confident person. There are areas of my life in which I’m very thin-skinned but not in this area. In this area, I think it’s right and proper that I should be criticized and that’s literature,” she shared with Charlie Rose.

She imagines a better world. 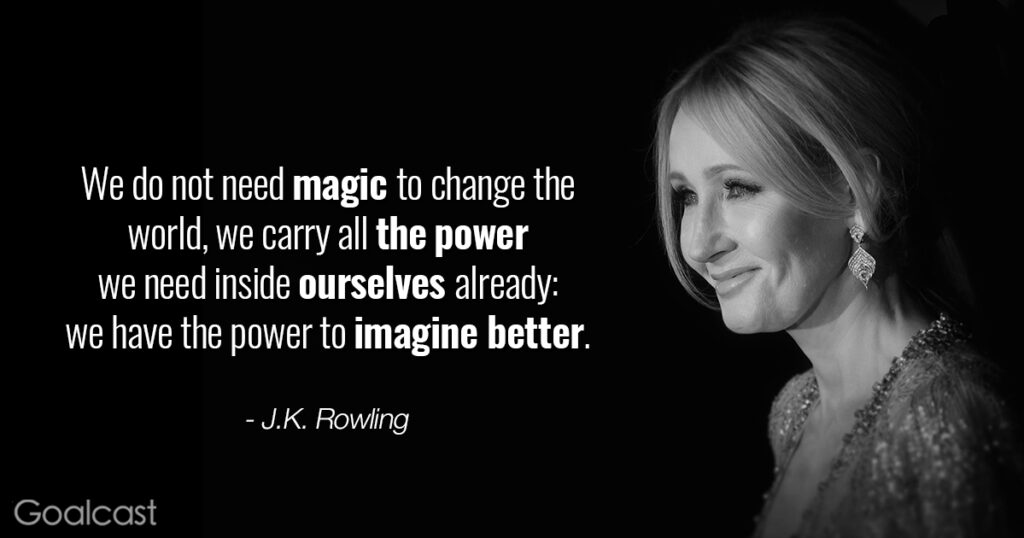 Is there anything more fundamentally important than positivity? No matter if you’re discussing your career, your friendships, your family or your relationship, maintaining hope is essential for happiness, success and of course, progress. Rowling believes her purpose is to make a better world — and she works hard to make it a reality.

In a Harvard speech, she illustrated her ideas: “If you choose to use your status and influence to raise your voice on behalf of those who have no voice. If you choose to identity not only with the powerful but with the powerless. If you retain the ability to imagine  yourself into the lives who do not have your advantages, then it will not only be your proud families that celebrate your existence but thousands and millions of people whose reality you have helped change. We do not need magic to transform our world; we carry all the power we need inside ourselves already. We have the power to imagine better.”