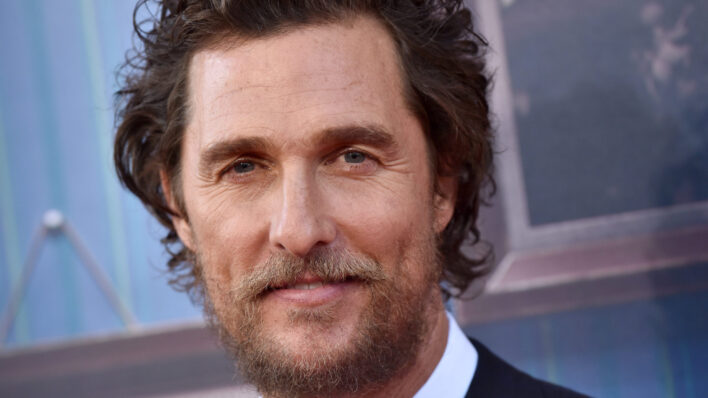 5 Daily Habits to Steal from Matthew McConaughey, Including His Penchant for Mixing Work and Pleasure

As a digital nomad and journalist, I travel the world while logging around 70 articles a month. To effectively manage a
By Lindsay Tigar    December 28, 2018

With a syrupy Southern drawl and a handsome mug to match it, Matthew McConaughey has been dazzling audiences since his first role in Dazed and Confused in the early 1990s.

Since then, he’s gone on to be a rom-com star in various cult favorites—from How to Lose a Guy in 10 Days and Failure to Launch to The Wedding Planner. In an effort to diversify his skill set, he also chased after dramatic leads, including The Lincoln Lawyer and The Wolf of Wall Street.

His most famous work of acting masterpiece however, was when he portrayed Ron Woodroof in Dallas Buyers Club, ultimately resulting in a Golden Globe, an Academy Award, a Critics’ Choice Movie Award and a Screen Actors Guild Award. He continues to star in HBO’s True Detective, try his hand in directing, and even took on the creative director gig for Kentucky Bourbon Distilleries Wild Turkey.

With no end in sight, this husband and dad of two with an estimated net worth of $95 million is just getting started.

Here are some of the philosophies that rule Matthew McConaughey:

He knows how to handle his stress. 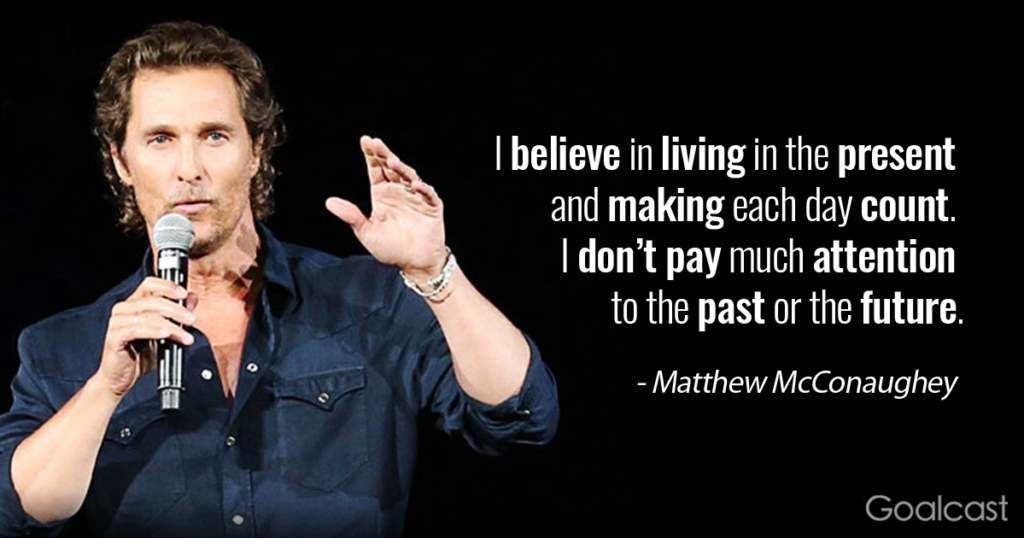 While fame may look rosy from the outside, there are plenty of responsibilities and headaches that come from being in the limelight 24/7. Of those actors, influencers and executives who reach a high level of success, cultivating smart strategies for managing stress is essential. For McConaughey, he abides by a simple—yet effective—mantra: “The situation can never be greater than you are.” In an interview with Men’s Health, he explains those who let the demands or anxiety get the best of them can never perform to their highest level of talent or skill. This is why he focuses on developing his craft, and pays gratitude for the opportunities that come his way by giving everything his full, 100 percent attention. “I don’t like to leave crumbs. I like to do things right, and not cheat to get ’em done. That’s what a man does. I don’t owe anybody anything. I never go anywhere and worry, ‘Oh shit, so-and-so’s here.’ I don’t have crumbs in my past,” he shared.

He mixes work and play. 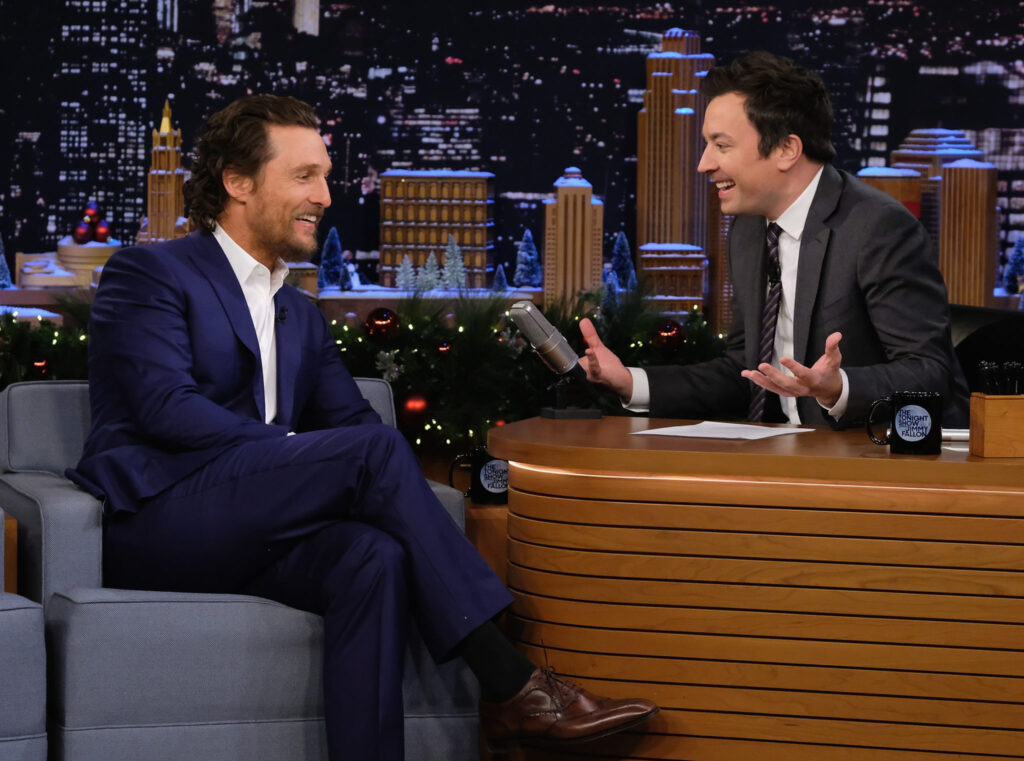 It’s the inevitable question every professional must face at some point in their career: how do I balance my personal life with my career? For McConaughey, having a healthy dose of work and play keeps him balanced, happy, fulfilled and productive. And he doesn’t just do this on a weekly or monthly basis, but every single day. In an interview with Men’s Health he shared, “There are some people who are so strict that they become a slave to their healthy lifestyle, a slave to working out, a slave to eating just the right foods. I’ve seen it happen to other people, and I’m guilty of going overboard with it. And when you do, man, you’re no frickin’ fun at all. You have to be more flexible and enjoy having things. I’m not going to a friend’s barbecue and say, ‘I’m gonna stick to salad.’ Who’s gonna enjoy that? Lighten up! It’s your lifestyle, not your life.”

Another helpful way to maintain this positive attitude toward work is actually enjoying what you do, too. As McConaughey explains, acting isn’t just his gig, but something he feels dedicated to, and brings him joy. In fact, it doesn’t actually feel like work at all most of the time. “Acting is like a working vacation for me. I can’t wait to go to work. I’m scared about it, I love it. I love the adrenaline of it. I’m confident with it. I’m surprised with it. It spooks me in a good way,” he told The Guardian. “I really like the adventure and experience of diving into it. It’s an excavation. It’s a construction. It’s architecture, building something. I’m happy. I look forward to it.”

He knows happiness is a journey. 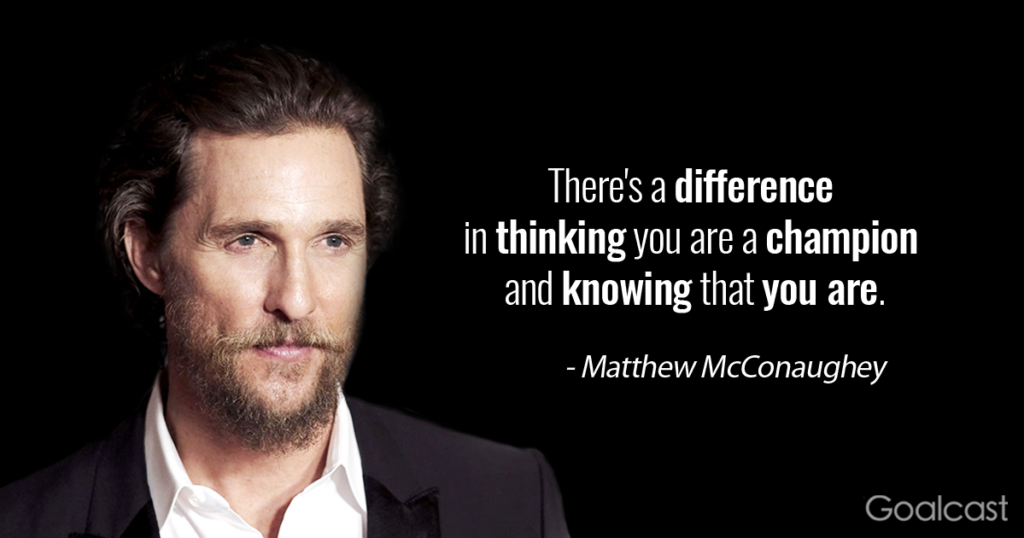 While some people run away from anything that shakes up their routine or challenges their belief system or values, McConaughey runs toward it, welcoming the disruption. After all, as he puts it, everyone says to just do what you love and you’ll be solid—but we can’t all do what we love. Instead, we have to find ways to shift our lifestyles to create the happiness we crave. “Happiness is an emotional response to an outcome — If I win I will be happy, if I don’t I won’t. An if-then, cause and effect, quid pro quo standard that we cannot sustain because we immediately raise it every time we attain it. You see, happiness demands a certain outcome, it is result reliant,” he shared in a University of Houston Commencement Speech. “If happiness is what you’re after, then you are going to be let down frequently and be unhappy much of your time. Joy, though, is something else. It’s not a choice, not a response to some result, it is a constant. Joy is ‘the feeling we have from doing what we are fashioned to do,’ no matter the outcome.”

You know how the say goes, so we don’t have to remind you, but consider this: those who are often the most satisfied with their lives have had difficult times in the past. Or they have jumped off a ledge and hit rock bottom. Or they’ve gone left, only to have to turn around and go right. McConaughey explains taking risks is part of the game—and something that he’s built into his career and personal life. He says this means making choices that help you eliminate what you want and what you don’t. “…I didn’t know exactly what I wanted to do. I knew what I didn’t want to do. I asked myself, ‘Are you ready, Matthew?’ And I spoke a lot to my wife about this too, of course—if you say no to a lot of the things you’ve been saying yes to, it’s probably going to get dry for a little while. ‘Are you ready to go without work for however long?’ I was starting a family—that was first on my mind. I had a new job, being a father. I love that and it kept me sane, because I love to work. And I said no to a lot of roles. It took about eighteen months for Hollywood to really get the message,” he shared in Garden and Gun.

He falls back on his roots.

As a native of Texas, McConaughey has always spoke warmly about his roots, and credits his upbringing to his personality and approach to career. He shares the ‘Texas who grew up in’ was not insular at all, and he was raised to travel around the world, show off where you’re from and experience the planet, he told Southern Living. Those who are connected to their homeland remain loyal, and often have a humble attitude toward their fame. No matter what interview he gives, how big of a name or reputation he earns, he makes an effort to give back to his home state and to inspire others to shoot for their dreams, too.