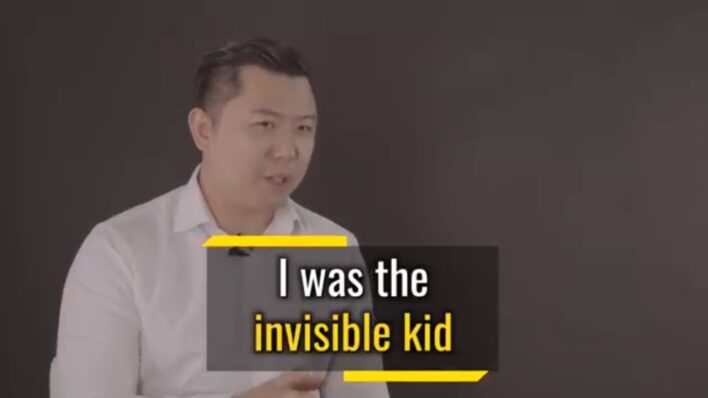 Dan Lok | How to Win Against All Odds

Dan Lok – Live With Gratitude Homesick, bankrupt, and father-less, young Dan Lok was devastated when he arrived home one
By Goalcast    July 27, 2018

Homesick, bankrupt, and father-less, young Dan Lok was devastated when he arrived home one day to find his mom in tears. His riveting coming-of-age story will inspire you to put your best foot forward every single day.

I was becoming very good at becoming the invisible kid. I was born in Hong Kong. I immigrated to Canada when I was 14 years old. First day, I didn’t even go out the door, I was so afraid. I was one of the only three Chinese in my school. I was getting bullied, I was getting beat up, I was getting pushed around. I would never ask questions that were put in my head. Right after school, I would just grab my backpack, go to my locker and not look at anyone, not make any eye contact and just go home. Shortly after then, my mom and dad got divorced, when I was 16 years old. One day, when I came home from school my mom would stay in the bedroom, but she was talking on the phone with somebody. And then after the phone call, she opened up the door, and I could see she was crying. I said, “Mom, is everything okay?” And she’s like, “Well, you know, I was talking on the phone with your dad and he just told me he went bankrupt.” To file for bankruptcy. He couldn’t send us money anymore.

My mom was always a very positive … It’s just like an angel to me. But, that’s the first time in my entire life that I looked at my mom now, in a country where she doesn’t speak the language, son doesn’t … kinda going through high school … Her face … The hopelessness. I said, I don’t care what ever it takes, I never want to see that again. I know father figure, I know role model. My father figure was when I watch … it was late-night … I was watching a Bruce Lee movie. It was Way of the Dragon, where he fought Chuck Norris. And he was a guy who couldn’t speak English went to Rome and got criticized, and then suddenly he was kicking ass and protecting people, so he became a hero in a way virtually he became the father figure I never had.

That strong, muscular, strong kick ass Kung Fu master, right? Right after that, near my house there was a karate school. So, I signed up for the karate school. That gave me the confidence. That gave me courage. And then from there I just made a commitment. Whatever it takes. I don’t need my dad. I will take … I will be the man of the family. I’ll take care of my mom. So that’s when I started thinking about how can I do something to make some money, and I was mowing lawns for people, I was delivering paper, anything that would make a buck, really. I was trying all kinds of business ideas. And then afterwards, I started my own one-man advertising agency. And that was my first taste of success, was being able to provide for my mom, finally how I can go to grocery store and not have to go to the expire … almost expire section to buy fruit and vegetables.

That was really very much the turning point. So, afterwards, I haven’t talked to my dad for a number of years, right? Because I was angry at him, until I had matured a little bit. Then I call him, and then we talk about what happened. And he could see me doing very well. I was making about $10 a a month as a young guy. Six figure a year. I knew he was just getting by. And he was worrying about a place to live. So at that time, I went back to Hong Kong, and I was walking down the street, the city in Hong Kong. We stopped. I said, I looked and said, “Dad, you see that window up there?” “Yeah.” I reached in my pocket, I pull a set of keys. I put it in his hands. My dad looked puzzled. I said, “Dad, I want to do that for you. You got a place to live in now. This is yours.” He was balling. All he could say is, “Son, let’s go get lunch.” That look made everything worthwhile.

At the time, he would talk. He said, “You know, next week son, I’m going into the hospital for a regular checkup.” And then I know the date after he did a checkup, I didn’t get the call. I thought it was a bit strange. And the next day, I got a call from my aunt. I pick up the phone, it was like 3:00 a.m. Very late at night. Your dad’s in emergency. I said, “What happened?” “Well, he found that he needed surgery immediately. We need to operate him.” But at the time, I was just chasing the biggest deal.” The biggest deal I’ve ever done in my life. I said, “I have to be in the U.S., I gotta finish this before I would come back, because it’s a very important deal.”

I had to do a little video conference with my dad, I could see him in the hospital. Hair all gray. He had this tube, he couldn’t speak. I said, “Dad, once … as soon as I finish I will come back and see you.” Right? And I thought I would make him proud. I thought I would close the deal, I would go to Hong Kong, I never thought about it. And that was the last time I talked to him. That was it. I never got to say goodbye. I never got to say anything. It’s a biggest regret. It’s truly the biggest regret. And I wish I had knew I had. And from that point on, I realized something that I was chasing achievement. I was chasing all these things, and when suddenly my dad was gone, suddenly all this stuff means a lot less. Suddenly it means a lot less to me about fame, money, wealth. All this stuff.

I think I believe in life you go through kind of four stages. The first stage is what I call survival, which is where I was when I was very young. And then going from survival to security. Your paying the bills. You’ve got a roof over your head. You’ve got a car. You’re taking care of a family. And then a percentage of the people would move to what I call stage three, which is success. When you’re successful, you don’t just have everything you need, you have everything you want. And, I operate in that stage for the first … I would say 10 years of my career. And then after that incident, after my dad passed away, then I shift from success to significance. When you shift from success to significance, it’s no longer just about you. It’s no longer just about hey, here’s what I want. Here’s what I want to have. Here’s what I want to own.

From a poor immigrant boy who couldn’t speak a word of English, now my work is impacting people in 100 countries. It sounds so cliché, but it is what’s your legacy, what’s your impact? What do you want to leave behind.? What do you want to be known for after you’re gone? Our society, we don’t take the time to just slow down a bit to be grateful, and find the little things to be grateful … The people around me, my family, my friends, my team, my students, every little thing. All the tragedy. All the mistakes. All the headaches. All the hardship. You might not like it, you would probably hate it, but you will look back and that would be the greatest thing that ever happened to you. All depends on how you interpret it. And that’s why people, they keep chasing and chasing and chasing, next thing they’re never happy. If you’re not grateful with what you have, you’re not going to be grateful even when you have more. So, I say it’s be grateful with what you have, while you strive for more.