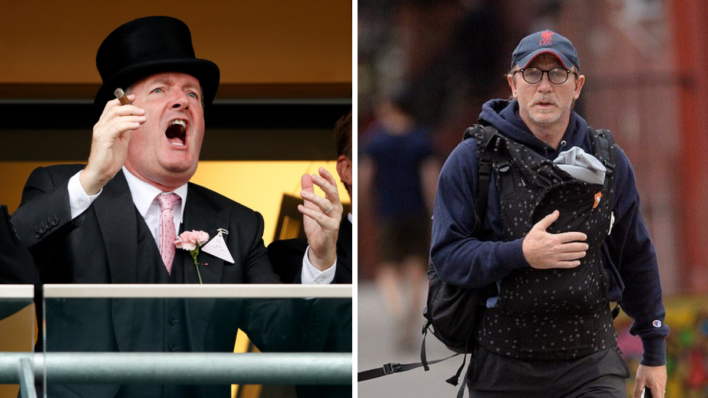 Daniel Craig was deemed not “masculine enough” for doing this. Here’s why we need to talk about it.

Daniel Craig was deemed not “masculine enough” for doing this. Here’s why we need to talk about it.

Even James Bond isn’t above childrearing.

Daniel Craig might be known as the suave, dashing, modern Bond, but he’s not in the business of carrying over the noncommittal, womanizing ways of 007 to his own life. By all appearances, he lives a serene, joyful existence with his wife, Rachel Weisz, their three-year-old daughter, his 24-year-old daughter Ella, and Rachel’s son from a previous marriage, Henry.

They’re a tight, cohesive blended family unit that doesn’t concern themselves with the intrusion of the press or what audiences are opining about them. They like to approach their day-to-day with the utmost privacy and restfulness, and if that still manages to aggravate certain sensitive personalities on-screen, it’s not their mess to deal with.  Moreover, Daniel has never indicated he’s not completely dedicated to the responsibilities associated with parenthood, so why did this particular ‘dad choice’ cause such a fuss among UK television?

The answer lies with Piers Morgan, a prominent English broadcast reporter who’s made a living out of dabbling in petty controversies involving high-profile celebrities and hot-button issues. Without delving too deep into Piers’ age-old tactics of drumming up faux-outrage, it’s no surprise he questions Daniel Craig’s masculinity over something as basic and unremarkable as a baby carrier.

What happened is that Daniel Crag was photographed carrying his daughter in what is commonly known as a ‘papoose’ while out and out in New York City. It’s a perfectly standard and harmless practice to hold your newborn in such a device, especially if your arms are full and you’re going through a busy street. Yet, Piers reframed this safety measure into a show of weakness on Daniel’s part, as if he’s compromising on his manhood by deigning to use a harness.

Piers tweeted a photo of the Knives Out actor, writing, “Oh 007.. not you as well?” with the hashtags “#papoose” and “#emasculatedBond.” Thankfully, his view was met with widespread criticism, with many dads chiming in about how they actually prefer to undertake a more hands-on role in their baby’s upbringing and don’t just depend on their partners to manage the bulk of the childcare.

Celebrities like Chris Evans also responded to Piers’ divisive tweet, sharing that someone has to be “so uncertain” of their own masculinity if they’re concerned about how some other man chooses to hold his child. “Any man who wastes time quantifying masculinity is terrified on the inside,” shared the Captain America star.

Piers didn’t back down upon catching wind of the pushback. He reiterated his hatred for pappooses and asserted he wouldn’t be censured by the impetus of public opinion. “I just hate papooses. I know the shrieking Twitter mob is trying to bully me into liking them – but they will fail in their mission,” he said.

The Good Morning Britain host elaborated on his comment in another tweet, writing, “carrying a baby is harder work, but worth it for the unashamedly masculine joy of NOT wearing a papoose.” He slammed these sort of dads in an episode of his morning chatshow, calling them “embarrassing” and “ridiculous.”

It’s a futile exercise to determine what is — or isn’t — masculine in this day and age, and you’re only digging yourself into a deeper hole if you continue to condemn men for their unique attitudes towards parenting. There is no shame in taking a more active role in the caretaking of your child; in fact, if you truly love your baby and value your role as a dad, you will want to be in the trenches, dying to savor every moment with your child. It’s commonly believed women are genetically programmed to obsess over their newborns. While this could absolutely be true to some extent, it doesn’t mean men can’t be overcome with as much emotion and concern for their babies either.

Piers would rather have his children in his “protective, paternal” arms, which really doesn’t make sense from a logistic or scientific perspective. Why is there such a fascination among these hypermasculine figures to favor the ‘primitive’ way over the technologically advanced route? Not that a baby sling is a revolutionary invention but the fact that it significantly simplifies an action should be celebrated as a win – not a representation of incapacity or weakness. It’s a tool that makes your life easier, similar to a car, fridge, or smartphone. If men are not labeled as feminine for banking on these solutions for their daily operations, why should they be shamed for using such an apparatus to affix their babies to their person? It’s ultimately more convenient at the end of the day, so reducing its merit to such a petty debate only convolutes the matter.

Daniel Craig, thankfully, hasn’t dignified the Piers’ verbal attacks with a response. He’s notoriously tight-lipped about his domestic affairs, and rightfully so if this is the type of reaction he is to expect every time. He isn’t going to let a few critical remarks impact his mindset. Fatherhood is an extraordinary role, one that you don’t get to cherish for too long at a time if you’re a busy actor jet-setting across the world. Plus, the fact that there’s an age difference of twenty-four years between Daniel’s first and second children likely influences his approach toward parenting. He’s older, wealthier, and more sure of himself; without assuming too much, he might have more of a reason this time around to be more attuned to his child’s growth and safety.

Piers, for his part, appeared to soften on his stance over the years. In 2020, amidst the COVID-19 pandemic, he recalled his comments and said they were “daft and sort of pointless and irrelevant in the general scheme of things,” adding that pandemic has allowed him to rethink and shift perspective. As it turns out, it is possible to reflect on and acknowledge your errors, though Piers still has a long way to go before he’s cleared of all his wrongdoings.

Your child comes before some age-old gender stereotype

It’s challenging to navigate the complexities surrounding fatherhood. That’s why it’s not necessarily your fault if you can’t determine the kind of father you’d like to be. The chances are that your definition of a ‘good dad’ will change as you and your child evolve. Concerning yourself with what’s masculine will only distract you from the big picture and will only ultimately have a negative effect on your child’s development. The basic tenets of good parenting are stability, support, safety, and understanding; as long as you do everything in your power to provide these elements to your children, you’re a good father.

We must acknowledge the changing tides and a reframing of what it means to be a father today. It’s not simply about being a breadwinner or disciplining your child; it’s about getting to know them, showering them with an endless amount of love, and supporting them as best as you can through each of their endeavors. If you’re letting ancient traditions impact your mindset, perhaps it’s time to take a beat and reexamine your method.