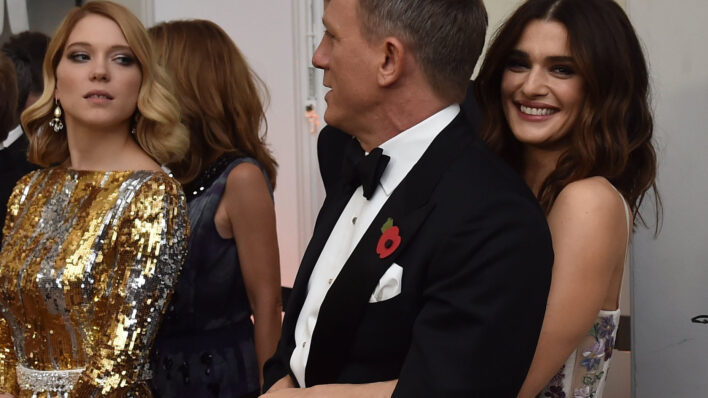 Daniel Craig and Rachel Weisz knew each other for years before the timing became right and they committed themselves fully to their love story.
By Barbara Pavone    November 22, 2019

Daniel Craig and Rachel Weisz knew each other for years before the timing became right and they committed themselves fully to their love story.

He’s James Bond. She’s an Oscar-winning actress. When Daniel Craig and Rachel Weisz secretly wed in 2011, they took the whole world by surprise.

Not only is the pair exceptionally secretive, but they’ve also had an unconventional love story that is a prime lesson in the importance of timing, dating back ti the ‘90s. They then went their separate ways and didn’t land back in each other’s lives until years later when everything finally aligned.

What we can learn from Daniel Craig and Rachel Weisz’ love story:

They started out as university classmates

According to Metro UK, Daniel Craig and Rachel Weisz met at university, long before either one of them was a household name. As The Telegraph reported, their first encounter was actually in 1994 at the National Theatre Studio.

The Daily Telegraph‘s opera critic, Rupert Christiansen, told the outlet that he first saw the future lovebirds working together in a workshop play called Les Grandes Horizontales. Christiansen was a historical consultant on the play about 19th century courtesans and told the magazine: “Of course, neither of them were famous then so their first meeting went unrecorded.”

He was there, however, and remembered, “The plot put them into a number of amorous clinches and there was a lot of faked sexual congress and ‘tasteful’ nudity.”

Their paths crossed again much later in life

As Craig and Weisz’s respective careers took off, their paths diverged as each found success, both in work and in love. It wasn’t until years later that their paths crossed again in 2010 when they were cast to play a married couple in the 2011 thriller Dream House.

At the time, Weisz’s nine-year relationship with Darren Aronofsky and Craig’s engagement to Satsuki Mitchell were both coming to an end. It was on the set of this film that they finally allowed themselves to explore deeper feelings for one another. So deep, in fact, that they wasted no time acting on them.

Six months later, they were married in a secret New York ceremony in June 2011.

In a 2012 interview with Marie Claire, Weisz was asked if she had experienced a sort of love at first sight on the film’s set and admitted, “It wasn’t really like that. We’d been friends for ages.”

Before Craig walked into her life, Weisz had spent nine years with director Darren Aronofsky and, despite their long-term relationship and the fact that they had a son, Henry, in 2006, they never walked down the aisle.

As the actress told The Standard in 2018, Craig turned her beliefs upside down and changed her mind about marriage.

“I never thought I would get married,” she confessed. “It was not an ambition of mine. It was the opposite. I couldn’t relate to romantic comedies — marriage seems to be the whole point of them,” she continued before concluding, “Then it just happened, happily, at a more mature moment.”

The actor changed her outlook so much, in fact, that she couldn’t be happier as a bride. “I wear my ring with pride,” she stated. “I’m taken.”

She continued that train of thought in an interview with The New York Times, gushing, “I’m very happy being married, very, very happy. I love being Mrs. Craig.” She added, “I’m Mrs. Craig on my checkbooks and passports and things.”

The secret to their success: secrecy

Not only was the couple’s wedding top secret, but they remain exceptionally quiet about everything they do. As HELLO! noted in 2015, they’re “one of the most private couples in Hollywood.” As it turns out, there’s a very good reason for that: it’s not just a matter of privacy, but rather one of their keys to success.

Speaking with MORE magazine, Weisz explained why she likes to keep their love out of the spotlight, saying, “He’s just too famous. It would be a betrayal. You have to protect your marriage. When you’re young, you tell your girlfriends everything,” she elaborated. “One of the great pleasures of not being an adolescent is that you don’t have to share everything.”

When you’re married, that door closes. The audience goes, and you’re in your own life.

They share in each other’s work (but not too much)

Having a partner who’s just as successful as you are in the same field means you can bounce ideas off one another and share in each other’s successes and struggles. Which is exactly what Weisz and Craig like to do– but not too much.

As The Favourite actress told Good Morning America, she and her husband like to “talk about films that we love or plays. We love to go to see theater and discuss things that we’ve seen. We respect each other. We appreciate each other’s work. He liked Disobedience very much.”

However, they do keep their acting talk in check because, as she told The Sun in 2013, “There is nothing worse than two actors getting together and talking about acting. It’s like the end — it’s the worst.” So they focus on their other shared joys and interests instead, like cooking.

“I love to cook. Daniel is also very good at it,” Weisz said in 2015. “We always enjoy trying out different kinds of cuisine and having fun with that.”

The biggest gift in their journey

Another major priority is their daughter whom they secretly welcomed in April 2018. As with most other aspects of their lives, they’ve kept her completely out of the public eye. And when it comes to their older kids (Weisz has son Henry with Mother! director Darren Aronofsky while Craig has daughter Ella with ex-wife Fiona Loudon), they seem to be totally on board with their parent’s newfound love.

In fact, when the couple tied the knot, Henry and Ella were two of just four guests.

Not only do Daniel Craig and Rachel Weisz show us that timing is everything when it comes to love, but they that when your bond is strong, you don’t need to seek validation from the outside world. Your relationship is yours and yours alone– and you can define what makes you happy.

If you’re feeling like a hopeless romantic after reading this article, check out our long list of love quotes!