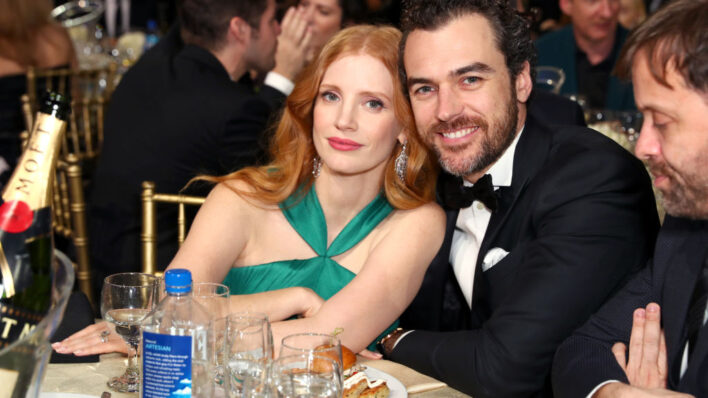 Welcome to #RelationshipGoals, where we’re giving the stage to the power couples we admire. From admirable long-term relationships to inspirational
By Barbara Pavone    June 7, 2019

She may be a two-time Oscar-nominated actress, but if there’s one thing that’s more impressive than Jessica Chastain’s career, it’s her penchant for secrecy.

The California native has been happily married since 2017 and yet, she rarely speaks about her groom or their relationship. When she does open up about her private life, it’s to gush about how wonderful Count Gian Luca Passi de Preposulo — that’s right: Count — is, but she’s always careful not to reveal too much.

What we do know is that Passi de Preposulo comes from a noble Italian family and is well-known in the fashion world, having previously worked as the Director of Public Relations at Armani. These days, he’s an executive at luxury fashion brand Moncler and it’s this fashion connection that first brought him in contact with Chastain.

The couple dated for five years before taking the next step in their relationship and walking down the aisle. They tied the knot in 2017 in a lavish Italian ceremony that actually landed them in the headlines for a change. The nuptials took place at Treviso’s Villa Tiepolo Passi, a sprawling estate owned by the groom’s family, and had a guest list full of A-listers, including Anne Hathaway and Emily Blunt.

They make each other “very, very happy”

Chastain and Passi de Preposulo made their first official outing together back in 2013 when they attended the annual Women In Film pre-Academy Awards bash in Los Angeles. Chastain was nominated for Best Actress for her role in Zero Dark Thirty that year and had plenty to celebrate, including finding the love of her life.

Ever the consummate gentleman, Passi de Preposulo was reportedly a dream date as he chatted with Chastain’s friends “with ease, even sharing a few laughs with Silver Linings Playbook director David O. Russell, though never too far from his date,” reports Yahoo!

While walking the Academy Awards red carpet later that weekend, the actress confirmed that she was indeed dating Passi de Preposulo and revealed just how smitten she was. “I’m very, very happy,” she gushed to Extra, adding, “It’s a wonderful thing when a career does so well and your personal life does so well. My friends and my family are so important to me.”

Having grown up in a single parent home and regularly being subjected to her mother dating men she didn’t approve of, Chastain decided that marriage just wasn’t for her.

“I never wanted to get married,” she confessed during a 2018 interview with WSJ Magazine. “My mom was a single mom; I don’t know who my biological father is, and I grew up in a household that was really financially unstable,” she told the mag, sharing her reasoning.

She told Passi de Preposulo early on that she was against the idea, but then things began to change. “When I first met my husband, he knew that marriage wasn’t something I was interested in. And then as we got to know each other, the idea of marriage shifted for me,” she recalled, explaining, “There are some things worth celebrating — and he’s worth celebrating.”

Despite her initial apprehensions, there’s now no doubt in Chastain’s mind that she made the right choice. “I actually love being married,” she proclaimed. “I never thought I would, but this is a spectacular human being, and I am celebrating that I get to share my life with him.”

Chastain may not open up about her husband all that often, but when she does, it’s usually to praise him, particularly his manners — not too surprising given that he’s a Count.

Sitting down for an interview with W Magazine, which noted that the actress “rarely discusses her personal life,” Chastain revealed that her favorite thing about Passi de Preposulo is that “he’s a gentleman. And that’s very important to me,” she said. “He’s from an old-school Italian family. No one in his family has ever been divorced.”

He himself also places great importance on proper manners. As Passi de Preposulo told Vanity Fair once, “It’s not the title that’s important — you have to be a count inside yourself.”

According to Us Weekly, that’s actually one of the reasons why the couple keeps their relationship out of the spotlight. “He is a classy guy and completely agrees about respecting their relationship and not flaunting it,” a source told the outlet in 2013.

They celebrate their love

Being in a long-term relationship can sometimes mean becoming complacent, but Chastain and Passi de Preposulo have been making sure to celebrate their love, no matter how much time goes by.

Just a few examples include Chastain’s loving Instagram posts. In 2016, she shared a snap of them on a beautiful cliff, writing, “So happy to be together on your birthday! Thankful for real life.” She followed that up with an even sweeter message on Valentine’s Day 2017, uploading another cute photo of them, gushing, “Some things are worth the wait.”

When it came time to celebrate their one-year wedding anniversary in June 2018, Chastain and Passi de Preposulo proved that newlywed bliss doesn’t have to fade, as long as you know how to have a great time together.

The couple enjoyed dinner and a show on their special day and, as the actress told PEOPLE, “It was a lot of fun! I feel even more happy being married in some strange way. I was told that the first year of marriage would be really difficult and people warned me, but actually it’s incredible. I just feel so happy and so grateful that I get to spend everyday with my husband, so it’s been wonderful,” she concluded.

More recently, Chastain rang in the 2019 new year with her arms around her hubby and a tender love note on Instagram that read, “Making my [heart] skip a beat into 2019.”