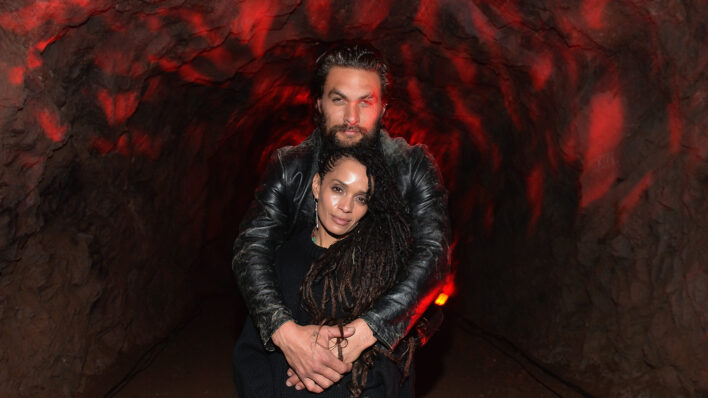 Welcome to #RelationshipGoals where we’re giving the stage to the power couples we admire. From admirable long-term relationships to inspirational
By Barbara Pavone    May 2, 2019

Welcome to #RelationshipGoals where we’re giving the stage to the power couples we admire. From admirable long-term relationships to inspirational newlyweds, these are the couples we love and hope to take cues from in our own relationships.

Jason Momoa and Lisa Bonet don’t like to play by the rules. Instead, they set their own. That goes for everything from their careers to their fashion choices, and even their unconventional relationship.

Following their first chance encounter in 2005, the pair built their life together quickly. In 2007, they welcomed a baby, daughter Lola Iolani, and in 2008, son Nakoa-Wolf followed. Bonet’s daughter from her previous marriage to Lenny Kravitz, actress Zoë Kravitz, has also been a part of their journey, as has Lisa’s rock star ex. If there’s one thing Momoa and Bonet prove it’s that true love conquers all and that a blended family can be a healthy family.

12 years after getting together, the lovebirds finally made it official and tied the knot in a top secret ceremony in late 2017. These days, they’re as strong as ever. Here are Momoa and Bonet’s keys to marital bliss.

Long before the couple met in person in 2005, Jason Momoa was already infatuated with Lisa Bonet. His love began nearly two decades earlier when the Aquaman star first spotted his future wife on the small screen, playing Denise Huxtable on The Cosby Show in the mid-80s.

Yes, he did eventually tell Bonet about his massive childhood crush, but not until it was safe to do so. “I didn’t tell her that until we had two babies, otherwise, I’d be creepy and weird,” he continued. “I’ve always wanted to meet her. She was a queen, always.”

Fate brought them together

It was 2005 when Momoa and Bonet finally crossed paths in real life. According to Momoa, fate brought them together.

“We met at this jazz club and we just happened to be at the right place [at the] right time,” he told James Corden. “I literally turned around, I was with my best friend, and I see her,” he recalled.

Their mutual friend proceed to introduce them and, as he told the late night show host, he nearly lost his cool. “I turned around to my friend and was like, [fangirl shriek]. I had f***ing fireworks going off inside, man.”

Once he managed to regain control, Momoa didn’t leave the rest to fate. Seizing the moment, he did what he could to spend as much time with her as possible. “I convinced her to take me home, because I was living in a hotel,” he recalled. They stopped by 101 Coffee Shop in Hollywood and Bonet ordered a Guinness, which Momoa took as another sign from the heavens. “That was it,” he told Corden. “We had Guinness and grits and the rest is history.”

That moment was such an important part of their love story that he recounted it again years late, telling Men’s Health in 2019, “I met her over a pint of Guinness. She ordered it. I thought: ‘Oh my God, I can’t believe I’m with a woman who ordered a Guinness. I love her.’ When I got to know her, she was the woman of my dreams.”

Bonet also felt the instant connection. As she told Porter magazine, “We have been together from the day that we met.” She continued, “In that moment, love came and it came big, and he did not run as I think a lot of men do. He basically picked me up and threw me over his shoulder, caveman style!”

Momoa was everything Bonet needed

Opening up about their unbreakable bond to Porter magazine, Bonet revealed that a key to their long-lasting romance has been Momoa’s ability to be his unique self and to give her exactly what she needs.

“What’s cool about Jason is that he’s an alpha male who stands for love and family,” she told the outlet. “And to circle back to my own wounds, having an absent father, then to be fully met by a man of that stature, is really incredible. Jason embodies a rare form of masculinity in this day and age – he’s a leader; he’s generous. Just in terms of charisma, physique, the right use of power, responsibility, work ethic, you can go down the line.”

As she told People, her husband also always gives her the strength she needs. In 2008, when she was set to make her TV comeback in Life on Mars, Momoa gave her the courage she lacked.

“To have my face reinstated in minds and homes once a week was an intense decision,” she said. “I’m a shy person. I don’t know if it’s in my DNA to share with the world. Having a mate has given me that feeling of safety. Jason is the love of my life. He’s everything I hoped would come.”

It works both ways. Bonet also brings out the best in Momoa. As he told E! after the pair brought his passion project, Road to Paloma, to the big screen in 2014, “[The role] required me to be very shy — she makes me shy and she’s the only one that can really do that. I just don’t want to suck in front of my wife. I don’t want to be bad. I want her to like me and love me and continue to do that.”

They blended their families seamlessly

Before she met Momoa, Bonet was married to Lenny Kravitz, whom she met at a concert in 1986. When she was just 19, the pair eloped to Las Vegas, got hitched and, in 1988, they welcomed a daughter, Zoë Kravitz. They eventually got divorced in 1993, but share nothing but love.

As Kravitz told Oprah’s Master Class in 2013, “Zoë’s mom and I now are best friends,” he said, revealing that he’s also friends with her new beau. “When we’re all together now — her man, her kids, Zoë, me — we’re all together and we’re one big, happy family. It’s beautiful and it just shows you what can be done.”

Momoa proved just how close he and Kravitz are in 2018, when he posted a snap of him and Zoë’s dad showing off matching rings and wrote, “I got @lennykravitz a present made by @leroyswoodentattoos amazing bone skull ring. Mahalo, Lenny for coming to support me on @nbcsnl,” he added.

Zoë also gushed about the pair’s special bond to Ocean Drive in 2015, saying, “My dad and my step-dad get along really well, and my dad loves and is close with my [step]brother and sister. It’s really beautiful. As long as everyone can be in the same room together, and have love for each other, it’s totally healthy.” They even have matching tattoos across their right forearms.

As Vanity Fair proclaimed in 2018, “Jason Momoa, Lenny Kravitz, and Lisa Bonet have mastered the modern divorce.” The best second loves fit seamlessly into your life.