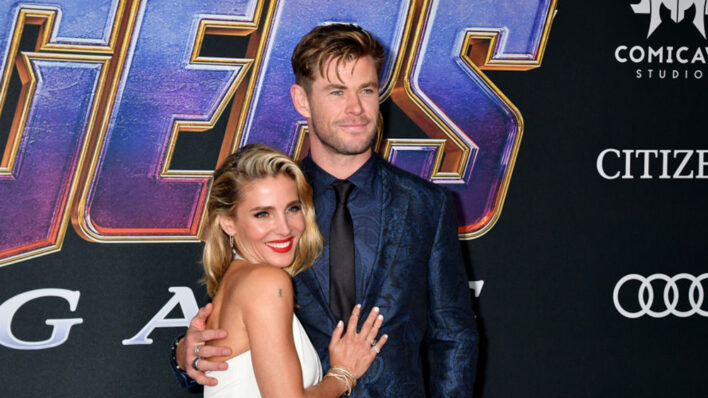 Welcome to #RelationshipGoals, where we’re giving the stage to the power couples we admire. From admirable long-term relationships to inspirational
By Barbara Pavone    April 25, 2019

Avengers star Chris Hemsworth and Spanish actress Elsa Pataky — who you might recognize from the Fast and the Furious franchise — aren’t your typical Hollywood couple. Maybe that’s because they don’t live in Hollywood (they call Hemsworth’s native Australia home) or because they always keep it 100% real.

After being introduced by talent agent William Ward in 2010, the pair embarked on a whirlwind romance that saw them getting hitched during a family trip to Indonesia that same year!

Talking about the exceptionally fast pace of their relationship with Good Morning Britain, Hemsworth revealed, “It did happen quick and it just felt right, just, it made sense. There was no great plan to any of it to be honest, we were on holiday and we said ‘why don’t we get married too?’”

Since then, they’ve had their ups and downs, but have always remained unshakeable. Here’s what makes this couple’s marriage work.

They met when they were old enough

Hemsworth and Pataky met in 2010, tied the knot in December of that year, then, come 2011, they were faced with sudden fame. Thor hit theaters in May 2011 and Hemsworth became an international superstar pretty much overnight, which was actually perfect timing.

“In the beginning it was beautiful – when I met him he wasn’t known at all and I grew with him and experienced all his successes and changes, and then he became just so huge and I’ve been sharing that too,” Pataky told Vogue Australia. “Going through every moment and being there with him with every success was actually a good thing – we grew together. It’s difficult when you go from being an unknown person to a very known person and all the changes that come with that.”

She elaborated on that thought with Stellar [via Daily Mail], saying, “’When I met Chris, he was just starting out [as an actor in Hollywood]. I had started young and I had worked a lot. I was happy to take a break and just be a mum. I just wanted to be there for [my children] and I feel lucky that I could do that.”

She also believes they met at the perfect age when she was in her mid-30s. “We met in a great place for both of us,” Pataky, who is seven years older than her husband, added. “I was totally confident within myself.”

Hemsworth also agreed that their timing was just right in an interview with Elle, saying, “From the first time we met, we just made sense. She’s fun. She’s outgoing, and she has a sense of humor and a passionate attitude toward life, which is nice to try to keep up with.”

They strive for normalcy

In a cover story for HOLA! USA, Pataky shared just how important maintaining a sense of normalcy is for her family, especially when it comes to raising her three children, India Rose and twins Tristian and Sasha. “All mothers try to instill our values, but I especially try to teach them to respect each other — to share — since they are lucky to have it all and are very privileged,” she told the magazine. “I want them to value it and be generous with people who don’t have that luck. Once a year I let them take their toys and donate them to children who have nothing.”

What’s more, she and Hemsworth make sure that their kids “think their parents are like the other parents, and that’s what I think they have to think all their lives,” she reasoned. “That their parents maybe appear in movies or on TV every once in a while, and for them it’s the most normal thing in the world, and they don’t have to think there’s a difference at all.”

They’re honest about their relationship struggles

All relationships come with their own set of challenges, but not all couples are willing to be open about them. That’s not the case for Hemsworth and Pataky, who have spoken candidly about their marital struggles.

The pair chose to have kids early on in their relationship (India Rose was born in May 2012 and the twins arrived in 2014), which wasn’t easy. As Pataky admitted to Vogue Australia, “We did everything very quickly – I don’t know how we survived as a couple. We were married and then a year after we had kids. It puts a lot of pressure on a marriage, but we came out good because there is a lot of love between us and we are very strong personalities but love each other so much. We make it work.”

Hemsworth also opened up about the realities of raising children, telling GQ Australia, “My wife and I fell in love, had kids, didn’t really see each other for a few years, then fell back in love. Once you have children, every instinct and every moment of your time is consumed by that. You’ve got nothing for each other — so make sure you have date night even if it’s once in a blue moon, because most of the time, you’re just too tired and you’d actually prefer to sleep.”

They put aside their differences

Sitting down on the Ellen DeGeneres Show, Hemsworth admitted that he and his wife don’t often fight, but when they do, it usually involves different languages. “When I hear the Spanish directed at me, it’s usually in pretty unfortunate, controversial, aggressive situations, so I’m just thinking, like, what is she saying right now, and what’s my comeback to this? [It’s] when we’re fighting, basically — which is never,” he laughed. “When she gets angry enough, drop the façade, the English façade, and it’s like, ‘Taka, taka, taka.’”

But they’re always able to set goals, work through it and laugh in the end. When all is said and done, they lift each other up. In a cover story for WHO, Pataky gushed, “He has always been really supportive of my work. We inspire each other and he always makes me feel more confident and beautiful when I’m insecure.”

So much so that “he encouraged me to go back to work again after I stayed home with kids for a while when they were born, and to not feel guilty about it. He works with me on my lines, my accent, and we have great conversations about the characters I am playing,” she continued. We are always understanding of one another because we share the same passion for what we do.”