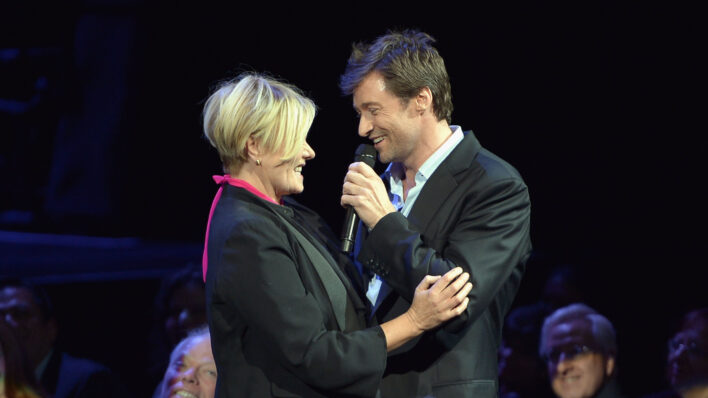 Hugh Jackman and Deborra-Lee Furness have done something almost unthinkable by Hollywood standards: They’ve been happily married for over two
By Barbara Pavone    May 23, 2019

Hugh Jackman and Deborra-Lee Furness have done something almost unthinkable by Hollywood standards: They’ve been happily married for over two decades. The fellow actors met while shooting a TV drama called Corelli in their native Australia in 1995 and Jackman was instantly smitten.

“That was my first job, where I met her,” he told Ellen DeGeneres in 2016. “She was the star. I had this major crush on her. Everyone did.”

Although Furness needed some convincing, she soon realized their love was meant to be. The couple tied the knot less than a year later in 1996 and have been together ever since. Along the way, they’ve adopted two children — Oscar Maximilian and Ava Eliot — and watched Jackman’s career take flight and achieve A-list status.

Neither fame nor time has tarnished their bond, however. To this day, Jackman and Furness are a prime example of what true love looks like. As Jackman gushed to People in 2017, “Underneath the surface where it’s real, and where it’s still and where it’s deep, that is the love I have with Deb.”

Here’s what we can learn from Jackman and Furness’ unfaltering connection:

He knew she was “the one” from day one

When you meet “the one,” you tend to know instantly and Jackman certainly knew– so much so that he secretly decided he was going to marry Furness less than a month into their courtship.

“I knew two weeks into meeting Deb that we were going to be together for the rest of our lives,” the actor told Today in 2018.

Which is why he didn’t let her get away, even when she voiced her reservations. “I knew before Deb knew,” Jackman admitted on the Aussies in Hollywood podcast. “Even when she tried to break up with me, I knew,” he continued, revealing.

“She kind of [broke up with me], a little bit. Early on, three weeks in. I managed to talk her out of it, thank God.” He added, “I just knew 100 percent, I even knew when she was trying to work out reasons to break up with me.”

After working through that bump in the road, Jackman popped the question to “the sexiest, funniest, most beautiful woman in the world” just four weeks later. Less than a year after that, they were married on April 11, 1996.

In addition to it being love at first sight, the Greatest Showman star also credits their timing as a key to marital bliss. The pair said “I do” before he became a Hollywood A-lister and, as he explained it, “I really think it helps that we were together before any of that, so we’ve been on this unbelievable journey, places we never thought we’d go to and we’ve done it together.”

It may not sound overly romantic, but Jackman and his wife follow a strict set of rules, which they established early on into their partnership. These include never being apart for more than two weeks at a time and never, ever going to bed angry. Setting goals like these is absolutely essential.

“Deb had a few rules when we met, ‘cause she’d done a few movies,” Jackman revealed in 2018. “She said we won’t spend more than two weeks apart. We never go to bed on a cross word. Sometimes it’s 3 o’clock in the morning, but we kind of work it out before we go to sleep.”

“Being honest” is another hard-set rule. “I think relationships, you gotta be yourself, even the bits you don’t love, the bits you’re embarrassed about or things you did wrong,” he elaborated. “If you’re in a situation where you can be yourself and really be honest, that’s a good start.”

What’s more, the couple also vowed to never put their careers in front of their family. ”When Deb and I got married, we made a pact that we would look at each other at every turning point in our lives and would ask ourselves if this is this good or bad for our family,” Jackman told Who magazine.

“The family is all four of us, so something may be great for my career but terrible for the family, or actually it may be a bit of a sacrifice for the family but really good for me,” he continued.

“There’s been times I’ll say, ‘Oh my God, there’s this film and it’s such and such and it’s this and that’ and very rarely, [Deb] looks at me and she’s like ‘No, now is not the time’ and she is just the best barometer of that.”

In addition to their unique set of rules, Jackman and Furness’ unconditional support for one another has also played a major role in their unbreakable relationship.

“In the end, what do you want from your life partner?” Jackman once asked. “You want to be fully seen and you want to be able to fully see them for exactly who [they] really are. And Deb and I had that from the beginning.”

If you don’t believe him, consider this anecdote he shared with Who magazine: “There’s a time no-one knows about, when I was offered Oklahoma in London and she was offered a spot at the very prestigious directing school at the Victorian College of the Arts [in Australia] — and that’s impossible to get into. There’s two or three taken a year, and I said, ‘Well, we’ll stay’ and she said, ‘No, now you need to go. We need to go to London and you need to do Oklahoma.’ I never forget her selflessness in saying that because I know she always wanted to direct, and that was a big moment for her.”

That selflessness goes both ways, however. “We are not going to work at the same time if we don’t have to financially,” the actor said in 2018. “So, one of us is always there to support the other. And we have maintained that for, well, next month is 22 years.”

They keep the spark alive

They’ve been together for over two decades but the flame between Jackman and Furness still burns bright. The couple has managed to keep the spark alive by spending plenty of quality time together, which includes birthday parties, anniversary celebrations, and lots of travel. Jackman has even created an Instagram hashtag for his love — #mydebs — which he regularly uses to share their adventures and special moments together.

In 2018, he celebrated Furness’ birthday with a selfie, which he captioned, “Happy birthday to my smart, sassy, sexy bride. I love you with my entire heart. #mydebs.” For their anniversary in 2019, he uploaded a silly snap of them covered in chocolate, writing, “Happy anniversary #mydebs #23.” And when the pair visited Sheikh Zayed Grand Mosque in Abu Dhabi, he posted a photo of them inside and captioned it with (what else?) “#mydebs”

And it’s not just on social media — Jackman regularly celebrates his wife offline too. “Even at the Oscars, I walk out, I put my hand on my heart and I always look to Deb in the audience,” he shared in 2017. “Straight afterwards, I will not see anybody in my dressing room until Deb’s been in. Because that is my foundation, that is the rock, that is the foundation of our family, and therefore my life.”