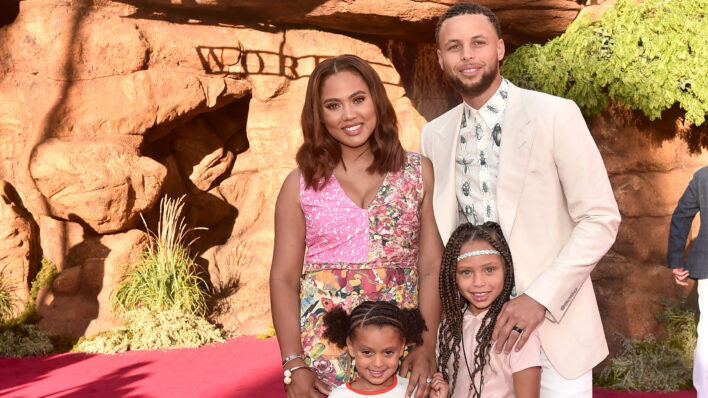 Stephen and Ayesha Curry met as teenagers but were afraid to make a move. When they reunited, they were ready to be together.
By Barbara Pavone    September 13, 2019

Stephen and Ayesha Curry met as teenagers but were afraid to make a move. When they reunited, they were ready to be together.

Stephen and Ayesha Curry aren’t shy about sharing their love for each other (and their three kids) on social media, providing fans with plenty of relationship inspiration, but their romantic partnership wasn’t built overnight. In fact, their journey to wedded bliss had its share of trials which may have deterred others, but for the Currys, it served to make their bond stronger.

While celebrating their eight wedding anniversary in 2019, Ayesha noted on Instagram that “through our ups and downs we only become stronger and that is the ultimate key.” She also praised her NBA MVP hubby for bettering her life — “Each day with you is the ultimate blessing,” she gushed, adding, “Getting to do life with you is an infinite sea of bliss” — but she didn’t always feel that way.

In fact, she initially refused to go on a date with Steph…

Here’s what we can all learn from the Currys’ evolving relationship:

They were teenage friends who lost touch

It’s hard to know what you want when you’re a teen, let alone how you should act around a crush. When a 15-year-old Steph and 14-year-old Ayesha first met in 2002 at the Central Church of God’s youth group in Charlotte, North Carolina, it wasn’t exactly an earth-shattering encounter.

As Stephen’s sister, Sydel Curry, told The Mercury News, Ayesha would treat Steph to candy she brought back from her native Toronto, Canada (his favorite were Maynards Fuzzy Peaches), but that’s about it.

“That’s how she would flirt with him, in a way,” Sydel recalled. “She would find him after church, barely say two words, and like, walk away. I would look at her like ‘God, she’s so lame.’ He clearly liked it. It left an impression.”

Not only was she shy, but Ayesha was also not allowed to date in high school, so nothing ever happened. Then, when she did finally graduate and leave high school in 2007, she packed her bags and moved to Los Angeles in pursuit of an acting career.

That could have easily been the end of the road for her and Steph, but it wasn’t…

While the celebrity chef was busy going to auditions and trying to land acting roles, her future husband was pursuing his own passion: basketball.

In 2008, Steph found himself at a basketball camp in LA and sent his former candy supplier a Facebook message, suggesting they should meet up. Unfortunately, they almost hit a dead end again when Ayesha blew him off.

“She tried to play me off, saying we could hang out another time if I was ever back in town,”  Stephen recalled in an interview with the Charlotte Observer. “She didn’t know I was coming back the next week.”

When work (and fate) brought him back to LA just a week later, Ayesha agreed to see her old friend, but they still weren’t on the same page. After going for a run around Hollywood, making a stop for chai lattes and snapping photos with Marilyn Monroe impersonators, Steph was so smitten, he went for it… and was quickly shut down.

In a 2016 interview with Parents magazine, Ayesha admitted, “He was in mid-conversation and came flying at my face like a thief in the night, so I was like, No. Then I thought, ‘Oh, I didn’t know this is what was happening.'”

She may have denied his first attempt at a kiss, but after Ayesha moved back to Charlotte in 2008, the pair finally started dating, only to be split up again. As Steph was drafted by the Golden State Warriors, he had to move to Oakland, California, leaving his love behind yet again.

The difference this time was that, knowing how hard he had worked to get Ayesha in his life, Steph wasn’t taking any chances.

As a family friend told The Mercury News, “That whole year Steph walked around on FaceTime or on his computer with Ayesha. If he wasn’t playing or practicing, he was talking to her.”

It was only after all of these ups and downs and near misses that the puzzle pieces finally began to fall into place. Stephen and Ayesha got hitched in July 2011 and welcomed their first child, daughter Riley, in July 2012, just a few days before their one-year wedding anniversary. Another daughter, Ryan Carson Curry, followed in July 2015 and, in July 2018, they had their first son, Canon W. Jack Curry.

They may have been young when they said “I do,” but they had already gone through enough together and, as Steph told Parents magazine, “I was 23; she was 22; but I knew I had found the right woman and I wanted to start a life with her.”

Their marriage comes first (even before the kids)

Despite a successful 11-year relationship, the celebrity pair still have their struggles and insecurities. In 2019, Ayesha revealed that seeing women “throwing themselves” at her husband “has given me a sense of a little bit of an insecurity.” Despite that, they always come together to work past the struggles.

As Ayesha told HelloGiggles, “mutual support” and communication —”Even when we don’t want to talk about something, we talk about it” — have been key, but even more importantly, their top secret has been putting themselves and their marriage before everything, even their kids.

“Both of our parents are still married and have been married for 30-plus years, and the one thing that they both shared with us […] is just making sure that we put each other first, even before the kids, as tough as that sounds,” she revealed, noting, “Because ultimately, when our relationship is good, the kids are happy and they’re thriving and our family life is good. We have to put that into perspective and realize that it’s not us being selfish, it’s making sure we set a strong foundation.”

No matter what life throws at you, you’ll be able to overcome it with your partner if your foundation is strong and your devotion to one another is unshakeable, like the Currys.

The key is to prioritize your love — and work hard for it while never losing hope that what’s meant to be will be.