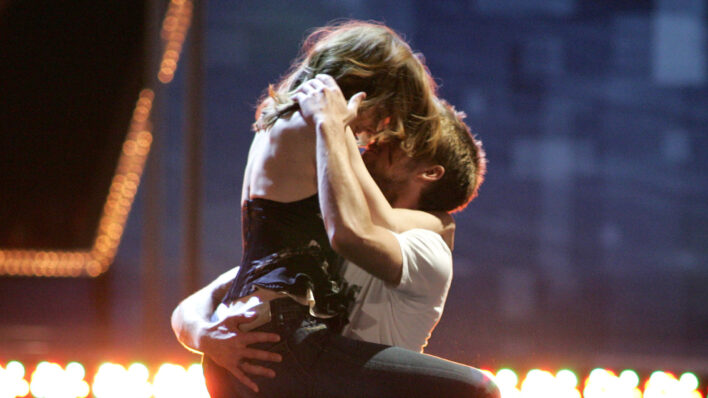 The Notebook’s stars Ryan Gosling and Rachel McAdams dated in real life and were often idolized as the perfect couple, but their romance wasn’t perfect.
By Barbara Pavone    August 22, 2019

The Notebook’s stars Ryan Gosling and Rachel McAdams dated in real life and were often idolized as the perfect couple, but their romance wasn’t perfect.

When it comes to definitive rankings of the most romantic movies of all time, 2004’s The Notebook regularly makes the cut. Unfortunately for fans of the film, relationship experts actually hate the flick, as they argue it creates unrealistic and unhealthy expectations.

Case in point: While the movie’s stars, Ryan Gosling and Rachel McAdams, did date off-screen and were often idolized as the perfect couple with a dream relationship, their romance was anything but picture-perfect.

The pair dated from 2005 to 2007, but their courtship didn’t reflect what fans saw on the big screen. At times, it was way better. At others, it was much, much worse.

It’s easy to dream of a love story resembling a perfect fairytale, but dating in the real world is never so simple and, although Gosling and McAdams have since gone their separate ways, there is an invaluable lesson to be learned from their time together.

They hated each other at first

It may be hard to believe, but despite the never-fading love fans saw in The Notebook, Ryan Gosling and Rachel McAdams’ feelings for one another were exceptionally different off-camera.

Simply put, they couldn’t stand each other at first.

This surprising revelation came from director Nick Cassavetes himself who, while celebrating the film’s 10th anniversary, spoke candidly about just how bad things got on set. So bad, in fact, that Gosling actually tried to get his leading lady fired.

In an interview with VH1, Cassavetes recalled an explosive day when, in the middle of shooting a scene, Gosling pulled him aside and asked, “Would you take her out of here and bring in another actress to read off camera with me? […] I can’t. I can’t do it with her. I’m just not getting anything from this.”

A screaming match ensued between the two actors

“We went into a room with a producer; they started screaming and yelling at each other,” Cassavetes revealed, but then things seemed to calm down. “I think Ryan respected her for standing up for her character and Rachel was happy to get that out in the open,” he noted. “The rest of the film wasn’t smooth sailing, but it was smoother sailing.”

While they managed to keep it civil and finish filming, their relationship was certainly no blooming romance.

As McAdams told The Independent in 2013, “We weren’t throwing Ming vases at each other, so it wasn’t loathing, but our relationship was not what you saw on the screen.” She confessed that real-life relationship “certainly wasn’t something that either of us had expected would come out of that filmmaking experience.”

They were mature enough to start fresh

Rather than fostering any sort of resentment or ill-will towards one another, Gosling and McAdams were mature enough to let the past be just that — the past.

When they bumped into each other a couple of years after working together, they were able to start fresh. As Gosling recalled, “Two years later I saw her in New York and we started getting the idea that maybe we were wrong about each other.”

By accepting the fact that people and feelings can indeed change, they were able to start with a clean slate and give their romance a real chance. Instead of fixating on prior issues or what they thought they knew about each other from their time on The Notebook set, Gosling and McAdams allowed a new dynamic to take over — one full of love and support.

McAdams, for one, became her new beau’s biggest fan and openly gushed about how much he inspired her and her career. “He never does the same thing twice,” she noted. “He’s very brave.”

Luckily, the feeling was mutual. Asked about his girlfriend’s praise during a press junket, Gosling proclaimed, “She’s kind. She doesn’t need any help from me. She’s inspired me to do so much as well.” He added, “She’s the most discerning person I’ve ever met.”

Reality was much more romantic

As their real-life love blossomed, Gosling and McAdams became one of Hollywood’s most beloved It couples with fans often comparing them to their Notebook counterparts.

However, according to Gosling, this was actually a disservice to their love. As he told GQ, “God bless The Notebook. It introduced me to one of the great loves of my life. But people do Rachel and me a disservice by assuming we were anything like the people in that movie.”

“Rachel and my love story is a hell of a lot more romantic than that.”

Though, ultimately, it wasn’t meant to be, neither actor had any regrets. As a source told People in 2008, there were no hard feelings and the two actually remained friends.

Following their split, McAdams was spotted supporting Gosling at his DJ debut and they were even seen having dinner together.

Years later, it was clear that Gosling still held his ex in the highest regard when he noted, “I had two of the greatest girlfriends of all time, [Sandra Bullock and Rachel McAdams].”

Today, Gosling has two daughters with his partner, actress Eva Mendes, while McAdams has a son with her partner, writer/director Jamie Linden. They keep their private lives out of the public eye and focus on their work, which has paid off: both McAdams and Gosling have been nominated for Oscars in the years since playing Noah and Allie in The Notebook.

By realizing that Hollywood’s portrayal of love isn’t realistic and that real relationships are imperfect — but can also be way more romantic — you can free yourself from unnecessary expectations and experience true romance. Real love freed from expectations will leave a positive impression on you, regardless of whether or not the end result reads like a movie script.

Don’t believe everything you see: rather, believe what you feel.

If this article left you feeling like a hopeless romantic, check out these love quotes.