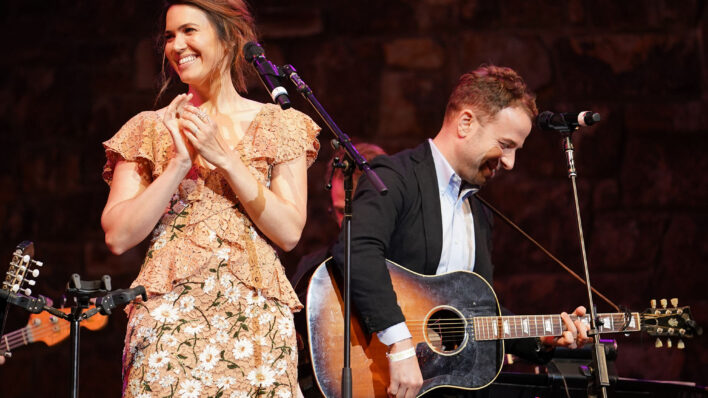 Mandy Moore and Taylor Goldsmith Rebuilt Their Marriage From “Trauma”

After the wreckage of her divorce and her waylaid music career, Mandy Moore found career success with This is Us and love with Taylor Goldsmith.
By Barbara Pavone    July 26, 2019

After the wreckage of her divorce and her waylaid music career, Mandy Moore found career success with This is Us and love with Taylor Goldsmith.

Mandy Moore and husband Taylor Goldsmith are in sync. Not only are they both musicians — Moore started out as a singer whose debut single, 1999’s “Candy”, went gold while Goldsmith is the frontman of folk rock band Dawes — but, more importantly, they’re true equals in their relationship.

It’s a love story that’s completely different from Moore’s marriage to Ryan Adams, which crumbled in 2016 after years of reported emotional abuse.

As she worked through the wreckage of her divorce and her waylaid music career, Moore found career success with This is Us and love with Goldsmith.

How did she find happiness again? And what made her take the risk of falling love after being hurt?

Here’s what we can learn from Mandy Moore and Taylor Goldsmith’s journey:

It all started with a photo

Talk about a modern day romance! Mandy Moore and Taylor Goldsmith met thanks to Instagram, when the actress publicly shared how much she loved Dawes’ latest album.

Posting a photo of the All Your Favorite Bands cover art in May 2015, Moore gushed, “Real excited about this one. Have a feeling it’s going to be the soundtrack of my summer.”

There’s no way she could have imagined what would happen next: Goldsmith messaged her and their love story began to unfold in the virtual realm.

As Moore told People in October 2017, “I took a picture of their album and posted it on Instagram. Somehow, Taylor saw it and sent a note to me. We started emailing back and forth, then we went on a date and the rest is history. Thanks Instagram, for helping me meet my fiancé!”

But they didn’t just meet on social media, they also relied on technology to help build their budding relationship. With Goldsmith touring and Moore busy on the This Is Us set in Los Angeles, they “spent hours FaceTiming each other.”

As the actress told People, “We fell in love before we’d even really held hands or kissed or anything. It was great.”

They are living proof that a deep connection isn’t just physical.

It’s also mental and spiritual and can therefore withstand nearly anything you throw at it.

The couple did eventually start spending plenty of time together and Moore found herself in a relationship that was a complete 180 from her failed, fraught marriage to singer-songwriter Ryan Adams. Moore and

Adams were married from 2009 to 2016 and initially reported an amicable split, but in February 2019, Moore reported that was far from the truth.

The actress, along with six other women, came forward in a New York Times article to reveal the emotional abuse Adams had put them through. Moore described how, rather than supporting her, Adams essentially crushed her music career.

After offering to help on her new album, he reportedly kept giving her studio time to other female artists and even told her, “You’re not a real musician, because you don’t play an instrument.”

Moore recalled Adams repeatedly knocking her down emotionally and, as she told the outlet, “His controlling behavior essentially did block my ability to make new connections in the industry during a very pivotal and potentially lucrative time — my entire mid-to-late 20s.”

She continued, “What you experience with him — the treatment, the destructive, manic sort of back and forth behavior — feels so exclusive. You feel like there’s no way other people have been treated like this.”

With Goldsmith, things couldn’t be more different. From Day 1, he acted as her emotional support. “I was still dealing with the trauma of my divorce when we started dating [and] Taylor was steadfast in his support,” Moore told Glamour in 2018. And he continues to support her, and her career, unconditionally. After Moore appeared in a Dawes music video, he told Entertainment Weekly, “I’m pretty blown away by her acting and just blown away by her in general.”

“I was still dealing with the trauma of my divorce when we started dating [and] Taylor was steadfast in his support,” Moore told Glamour in 2018.

Goldsmith continues to support her, and her career, unconditionally. After Moore appeared in a Dawes music video, he told Entertainment Weekly, “I’m pretty blown away by her acting and just blown away by her in general.”

Unlike Adams, he’s completely behind her music, even co-writing a song for her titled “Invisible Ink“. The track was featured in This Is Us and, as he gushed on Instagram, Goldsmith was thrilled about the opportunity to “write it and then to get to record it with my favorite human.”

Their love just keeps getting stronger

Since they began dating, Goldsmith and Moore have been each other’s No. 1 fans and it’s made them incredibly strong as a couple.

As Moore told People in 2017, “I feel incredibly understood and supported. I feel incredibly lucky to have somebody who is like, ‘I got your back.’ I found the right person and I feel like we can handle anything together.”

Speaking with Us Weekly, she elaborated, “We’ve had our fair share of challenges in life that we’ve weathered and it’s made us stronger. He’s incredibly supportive and incredible proud of me, as I am of him. I just found a true equal in every sense of the word. He’s my favorite person on the planet.”

If anyone thought the couple was simply going through a honeymoon phase, they were wrong — Moore and Goldsmith are as smitten as ever. Since saying “I do” on November 18, 2018, their feelings haven’t become any less intense.

Goldsmith made this fact very clear when he professed his love for his wife on Instagram in April 2019. Not only did he call Moore “the bravest, baddest, bestest wife a guy could ever dream of,” he continued, “I love you more and more with each moment I get to spend in your presence […] Your kindness and wisdom truly know no bounds. I’m so stoked I get to know you forever. Thanks for hanging out with me.”

And their future looks just as bright. Looking ahead, Moore told Glamour, “He’s going to be the most tremendous father” and admitted, “I view the past as a stepping-stone to get me where I am today. I would gladly weather all of that a million times over if it brought me to Taylor again.”

Because finding your other half makes everything worth it, Moore took the risk of opening her heart again after being hurt — and it paid off. She knew that she deserved a better kind of love, and that’s what her Goldsmith is giving her. Their happiness is also reflected in their thriving careers, independently and together.