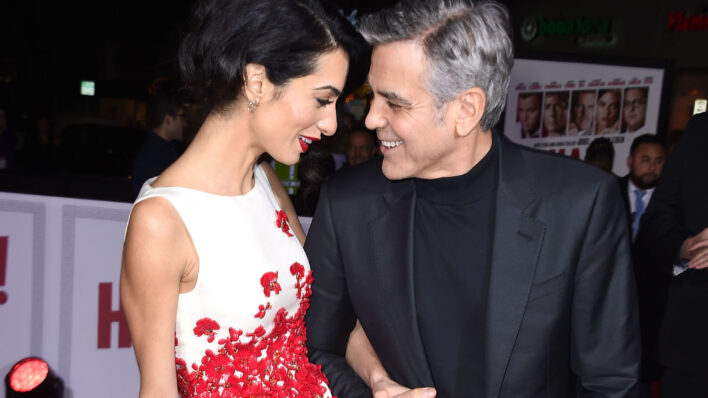 Welcome to #RelationshipGoals, where we’re giving the stage to the power couples we admire. From admirable long-term relationships to inspirational
By Barbara Pavone    June 27, 2019

As any George Clooney fan would tell you, the Oscar winner was the quintessential bachelor and proud of it — “I haven’t had [marriage] aspirations in that way, ever,” he once told Esquire — for most of his life. Then, at 53, everything changed. He walked down the aisle and then, at 56, he became a father.

How did such a drastic shift in perspective happen so suddenly, and after so many decades? The right woman walked into his life. After the Oscar-winner met Amal Alamuddin in 2013, he became a different man. A better man, as he tells it.

Here’s what we can learn from George and Amal’s relationship:

Their love came out of left field

They say that love comes to you when you least expect it, and that was certainly the case for George and Amal Clooney. Neither one of them was actively searching for a partner when an unexpected turn of events brought them together.

It was 2013 and George had invited a friend over to his home in Lake Como, Italy. As he told David Letterman during an interview on My Next Guest Needs No Introduction: “It was the wildest thing. A mutual friend of ours said, ‘I’m stopping by, can I bring my friend?’ and I was like, ‘of course.'”

At the time, the actor had no idea that said friend would prove to be the love of his life, but he did get a head’s up from his agent, “[who] said, ‘I met this woman who’s coming to your house who you’re going to marry.’”

The serendipity didn’t end there. As he revealed, “The funniest thing was my mom and dad were visiting, so my parents were there. We stayed up all night talking and then I got her email address because she was going to send me some pictures of my parents.”

“I thought she was beautiful and I thought she was funny and obviously smart. She probably thought I was old,” he joked of their first encounter. Eventually, Amal sent him those photos of his parents and the pair started messaging back and forth, keeping each other updated on their lives.

Even so, George admitted to Letterman, “I didn’t know if she wanted to go out with me, I just thought we were buddies.” Recalling his next move, he said, “I chased her for many months, calling and writing, those kinds of things.” Despite his trepidations, the feeling was mutual.

Their relationship wasn’t the only thing to take the actor by surprise, however. As he confessed in 2017, “I really didn’t think at 56 that I would be the parent of twins. Don’t make plans. You always have to just enjoy the ride.”

They’ve been a team from Day 1

Whether it’s dealing with humanitarian crises or raising their two children, the Clooneys are always a team, as they have been from the very beginning. In fact, it was their strong partnership that made Clooney certain he was ready to spend the rest of his life with Amal.

Recalling the night he proposed, George told The Hollywood Reporter, “My only doubt was if she thought maybe it was too soon. But there was no doubt that we were the right couple and that we were the right team. And we were a team from right off the bat. Immediately, we felt we were just happy, and we have been happy ever since.”

When they welcomed their twins, Alexander and Ella, in 2017, they showed just how in sync they are when they made an important pact.

“We decided to be much more responsible, to avoid the danger,” Clooney told Paris Match, revealing why they chose to scale down their travels to war-torn countries. “I will not go to South Sudan anymore and in the Congo. Amal will no longer go to Iraq and she will avoid places where she knows she is not welcome.”

They make each other better

Opening up about how he’s changed since meeting Amal, George told The Hollywood Reporter in 2017, “It changes you in every way that every person who’s fallen madly in love changes. Suddenly, the other person’s life becomes more important than your own,” he explained. “I’m sorry I was 50-something when it happened, but only because I could have spent even more time with her.”

According to his friend Julia Roberts, said change is obvious. As she revealed, “When we’re at their house I see the influence. In a beautiful way that all wives kind of have a beautiful, loving influence over their husbands.”

When Clooney was awarded the AFI Life Achievement Award in 2018, he once again opened up about the tremendous impact his wife has had on him, proclaiming, “I thought if you had a successful career that you weren’t really going to be able to have one great love in your life. And then Amal walked in.”

But it’s not just Amal who has had a massive influence on her husband — he too has turned her world upside down.

As she admitted at the AFI Awards while introducing her husband, “I met George when I was 35 and starting to become quite resigned to the idea that I was going to be a spinster. Then we met, started hiding out in my London flat and very soon it felt like no matter what happened I would never want to be with anyone else. I couldn’t sleep when we were apart, and I’m told I would display a particular grin and head tilt when reading his text messages or the letters that he would hide in my bag.”

“Five years later, none of that has changed,” she continued. “He is the person who has my complete admiration and also the person whose smile makes me melt every time. My love, what I have found with you is the great love that I always hoped existed. And seeing you with our children, Ella and Alexander, is the greatest joy in my life.”