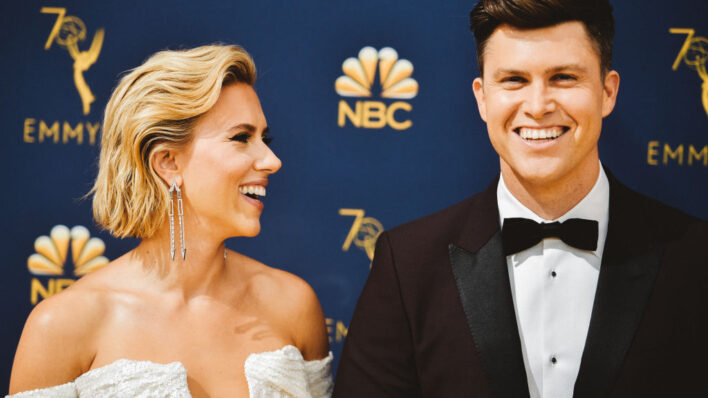 Welcome to Relationship Goals, where we’re giving the stage to the power couples we admire. From admirable long-term relationships to
By Barbara Pavone    June 20, 2019

Welcome to Relationship Goals, where we’re giving the stage to the power couples we admire. From admirable long-term relationships to

Welcome to Relationship Goals, where we’re giving the stage to the power couples we admire. From admirable long-term relationships to inspirational newlyweds, these are the couples we love and hope to take cues from in our own relationships.

You never know what life will throw your way and, sometimes, heartbreak can lead to more happiness than you’ve known before. That was the case for Scarlett Johansson.

While the Marvel’s Avengers star was going through her second divorce in less than a decade, she was faced with something she couldn’t have expected: a brand new chance at love. She certainly wasn’t looking for it, but Saturday Night Live funnyman Colin Jost came into her life in a big way and, after a helpful push from a mutual friend, she let herself fall.

This couple didn’t let previous failures or doubts stand in their way.

Here are the valuable lessons we can learn from Scarlett Johansson and Colin Jost:

It took some serious time to heat things up

It was March 11, 2017 and Scarlett Johansson was hosting Saturday Night Live for the fifth time. Colin Jost was there not only as host of the “Weekend Update” segment, but as a head writer of the entire show. At the time, she was still finalizing her divorce from French journalist Romain Dauriac and he had recently split from Parks & Recreation star Rashida Jones, but that didn’t stop the couple from hitting it off.

As Jost told Entertainment Tonight, that actually wasn’t their first time meeting. “The first time she hosted [in 2006] was the first year I was a writer on the show,” he revealed. “So, we’ve kind of known each other since then.” Despite being acquaintances for over a decade and the great rapport they had, it still took a bit of coercing to help their love bloom.

According to Life & Style, it was actually SNL star Kate McKinnon who pushed them together. As an insider claimed, “Scarlett and Kate McKinnon are very close pals. Kate was the one who played Cupid and pushed Scarlett and Colin to go on their first date.”

After that, their romance snowballed and soon, they were inseparable. Despite trying to keep their budding romance under wraps, they were repeatedly caught by the paparazzi and finally made their red carpet debut in November 2017 at the American Museum of Natural History Gala. Come May 2019, they were engaged.

He made her put aside her doubts

Johansson may have walked down the aisle twice before (she was married to actor Ryan Reynolds from 2008 to 2010 and Romain Dauriac from 2014 to 2017), but as she revealed in 2017, she’s actually always had doubts about settling down.

Speaking with Playboy, the actress voiced her concerns about the very principle of monogamy, saying, “I think the idea of marriage is very romantic; it’s a beautiful idea, and the practice of it can be a very beautiful thing [but] I don’t think it’s natural to be a monogamous person.”

She reasoned, “I might be skewered for that, but I think it’s work. It’s a lot of work.” She continued, “The fact that it is such work for so many people — for everyone — the fact of that proves that it is not a natural thing.”

Despite that, after falling for Jost, she soon decided to put those doubts aside and work for their relationship, no matter how hard it might be.

Their differences complement each other

Having previously fallen in and out of love with a famous actor, Johansson was likely speaking from experience when she opened up about the difficulties actors face when dating other actors.

In an interview with Cosmopolitan, she explained, “The logistics of being with another actor are challenging. There has to be a real understanding of how you share your time, especially when two people’s careers are going at the same rate. Or even if one person is more successful than the other, that also proves challenging. There may be a competitive thing.”

That’s not something she has to worry about with Jost. Yes, he’s a TV star and well-known comedian, but his job doesn’t require him to travel as often (he’s based in New York City most of the time).

What’s more, they’re never competing for the same roles and accolades and it also helps that he’s nothing like the other guys she has dated.

They’re “in it for the long haul”

Despite the slow start and any apprehensions Johansson may have had following two major heartbreaks, the pair found their footing rather quickly and by February 2019, Us Weekly was reporting that they were “fully committed to each other.” This was proven to be fact when they got engaged less than three months later.

The romance worked because the timing was actually perfect. “She is a mother and in a mature place where marriage makes more sense than it did in earlier relationships that didn’t last,” Us Weekly reported. “She is in love and likes to be married, but is aware of how hard it is these days.”

What’s more, they’re completely smitten. According to the mag, Jost “gets a starry-eyed look in his eyes when he talks about her” while “Scarlett loves Colin too, and they are in it for the long haul.”