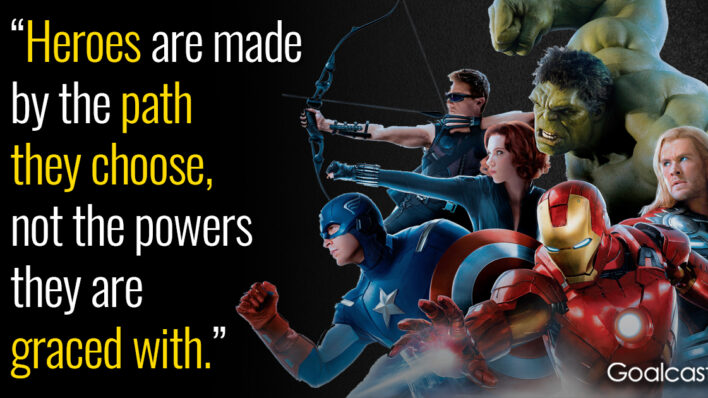 15 Marvel Quotes to Help you Find the Superhero Within

Marvel Comics was founded by Martin Goodman in 1939, and was first known under the name Timely Publications. And ever
By Flavia Medrut    February 28, 2018

Marvel Comics was founded by Martin Goodman in 1939, and was first known under the name Timely Publications. And ever since then, Marvel hasn’t stopped entertaining us.

The Marvel universe introduced us to thousands of heroes and villains over the time, making it impossible not to get fond of at least one character. And the best part of it is that you can read the comics or watch the movies as an adult, since Marvel developed a reputation for focusing on complex characterization and relatable issues.

Every story revolves around a lesson in life, intends to explain the psychology behind certain behaviors, and mostly makes you think about the choices you would make if you had superpowers. So, how would you use them? Would you become the hero or the bad guy?

Grab your cape, because here are 15 Marvel quotes that might just give you superpowers.

The strength of this country isn’t in buildings of brick and steel. It’s in the hearts of those who have sworn to fight for its freedom!

If there is nothing but what we make in this world, brothers, let us make it good!

When you decide not to be afraid, you can find friends in super unexpected places.

The door is more than it appears. It separates who you are from who you can be. You do not have to walk through it… You can run.

Violence doesn’t discriminate. It comes as cold and bracing as a winter breeze and it leaves you with a chill you can’t shake off.

Intelligence is a privilege, and it needs to be used for the greater good of people. Just because someone stumbles and loses their path, doesn’t mean they can’t be saved. – Professor Charles Xavier

If you cage the beast, the beast will get angry.

No man can win every battle, but no man should fall without a struggle.

Faith is my sword. Truth is my shield. Knowledge my armor.

The world is changing. Soon there will only be the conquered and the conquerors. You are a good man, with a good heart. And it’s hard for a good man to be a king.

The world is full of evil and lies and pain and death, and you can’t hide from it; you can only face it. The question is, when you do – How do you respond? Who do you become?

Whatever happens tomorrow you must promise me one thing. That you will stay who you are. Not a perfect soldier, but a good man.

Heroes are made by the path they choose, not the powers they are graced with.