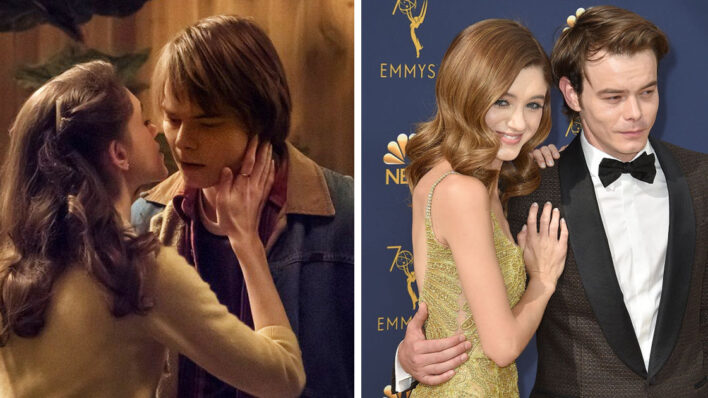 Welcome to Relationship Goals, where we’re giving the stage to the power couples we admire. From admirable long-term relationships to
By Barbara Pavone    July 5, 2019

Welcome to Relationship Goals, where we’re giving the stage to the power couples we admire. From admirable long-term relationships to inspirational newlyweds, these are the couples we love and hope to take cues from in our own relationships.

On-screen romance can often lead to real-life love, which is exactly what Stranger Things co-stars Natalia Dyer and Charlie Heaton experienced — even if they did try to hide it, and still work hard to not give away too much. It’s this very secrecy that’s helped their bond grow strong, far away from prying eyes and interference.

Here’s how they turned their work relationship into a romance:

As fans have learned, the notoriously tight-lipped actors, who play Nancy Wheeler and Jonathan Byers on the smash hit Netflix series, are not just amazing at keeping storyline secrets to themselves — they also have a talent for being exceptionally private about their relationship. So much so that it took nearly a year for them to even confirm they were dating, despite mounting speculation.

Rumors first started swirling in September 2016 when the pair took a trip together to Spain and posted photos of each other on their Instagram feeds. Next, they hit the SAG Awards red carpet together in January 2017. The pair posed for photos and looked awfully comfortable before taking two more trips that same month. When paparazzi spotted them at the airport, Dyer was even photographed wearing her rumored boyfriend’s Converse sneakers.

Despite all signs seemingly confirming that they were dating, just like their on-screen characters, Dyer and Heaton refused to comment on their status, instead working hard to let their love bloom privately.

When TMZ spotted them at LAX in March 2017, they asked the couple if they were dating and Dyer immediately played coy. “Whether people are dating or hanging out, I think that our cast just is cool with each other,” she said. “I mean, I won’t speak for anybody else but it’s been, you know, we’re all one big family.”

In the months that followed they kept dodging questions while an unnamed source confirmed the buzz to Life & Style, saying, “They’ve been together since before Season 2 of the Netflix series began filming in October.” The insider also added that the lovebirds spend “every waking minute together, on set and off.”

The young stars were later photographed holding hands in NYC in October 2017 and finally caved in December, confirming all the headlines when they made their red carpet debut at the British Fashion Awards. Although they still don’t gush about each other often, they have made some exceptions.

When Us Weekly caught up with the young actress at the 2018 SAG Awards, the outlet asked her what she loves most about her beau and in true Dyer style, she made sure to shout out the entire cast in her response. “He’s alright, I guess,” she quipped. “He doesn’t mess up our scenes too much! No, he’s great,” she continued. “He’s talented, like everybody in the cast. They’re all super, just great to work with.”

Their sweet messages shine through

As for Heaton, he’s got a knack for penning sweet notes to his girlfriend without ever giving too much away and keeping the focus on work, just like Dyer. Celebrating her birthday in 2018, he shared a photo of her holding a slice of cake on Instagram, which he captioned, “Happy 21st birthday! @nattyiceofficial. I hope it’s a great one and I’m stoked to be working on this new series with you. I think it’s gonna be great. P.S – Not feeling too well but I still wanna meet you at piedmont park tonight x.”

It wasn’t until an interview with Refinery29 in July 2019 that Dyer actually spoke candidly about her boyfriend.

“It’s an interesting thing to work with somebody who you go home with,” she admitted, elaborating, “It’s always really fun. We’re really comfortable with each other, so we can play and feel more free, and we can talk about it before.” That’s as much as she’d say, however, and quickly went on to point out just how sacred privacy is to her: “That’s something important to me — with my family, with my friends, I really like to keep it for me.”

Meanwhile, Heaton has only really opened up about his relationship once to date in a February 2019 interview with V Man.

Asked if it makes it easier to have Dyer on set and to work with the one you love, he said, “Yeah, because there are times when you do get stressed. So to go home with someone you work with, and say, ‘I think they hate me…’ They’ll say, ‘No they don’t.’ You can break the walls down with your partner.”

“Because we work in the same industry and have had similar trajectories, we’ve gone through it together. Sharing that does bring you closer,” he added. “They understand something that maybe no one else would. You go into high-pressure situations together but you can share those insecurities or whatever they are. The great, happy times, too. Really f***ing sweet!”