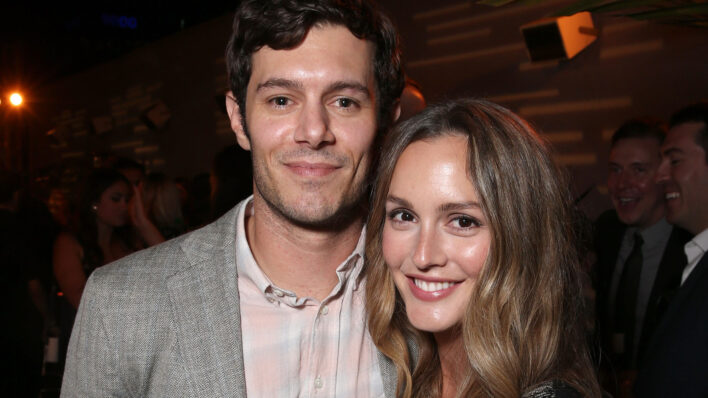 Adam Brody and Blair Waldorf starred in serious teen TV dramas but their mature marriage is the complete opposite of all that.
By Barbara Pavone    September 3, 2019

Adam Brody and Blair Waldorf starred in serious teen TV dramas but their mature marriage is the complete opposite of all that.

Anyone who watched either The O.C. or Gossip Girl, two of Josh Schwartz’s immensely popular teen dramas in 2000s, will remember the dysfunctional romances depicted in those shows. The kind of romances that are fun to watch when you’re a teenager, but don’t hold up from a mature perspective.

On The O.C, for example, Seth Cohen, played by Adam Brody, endured a rollercoaster relationship with Rachel Bilson’s Summer Roberts, which repeatedly saw him struggling to be “good enough,” putting his crush on a pedestal, and even two-timing.

This makes the fact that Adam Brody and Leighton Meester have managed to build a strong, unwavering adult marriage in real life, far away from the media and its prying eyes, all the more intriguing — and impressive.

By being the complete opposites of their on-screen characters, the actors have crafted a very mature, very healthy relationship that we can all learn from.

How they kept their relationship out of the drama:

He’s no Chuck, she’s no Summer

Adam Brody and Leighton Meester may have spent a large portion of their young lives trapped in toxic relationships on the small screen, but luckily, they didn’t allow those storylines to affect their real-life perceptions of what a partnership should be.

While Brody’s character was repeatedly left trying to suppress his geeky nature to win over a love interest he idolized to an unhealthy degree, Meester’s role had her in a romance fraught with jealousy, manipulation, and an inability to be honest with herself and her boyfriend.

Given how young and impressionable both actors were at the time, their roles could have certainly had a negative impact on their outlook on love.

Meester told Porter’s Edit magazine in 2018, being just 21 years old when she was cast on Gossip Girl meant she needed to grow up fast.

“If you don’t have the right perspective, you could definitely be confused by people being that nice to you or judging you for behaviour that’s typical of a 20, 21-year-old,” she noted. “I had to figure it out quickly and with not a completely developed mind to discern between what’s real and what’s not, who I can trust and who I can’t.”

She never let it knock her down, however, and instead used those experiences to learn, grow and better herself. She also learned from Blair’s mistakes on the show, telling Lance Bass: “I hope that young women aren’t looking at [Chuck and Blair] and thinking ‘I should model my relationships after this’ because there was some domestic violence in there.”

She even went on to credit her journey with leading her to her “soulmate” Adam Brody, who reflected on Seth’s failings in a 2019 GQ interview: “I do wonder if he’s selfish and that leading with your insecurities isn’t enough.”

Their life is not a TV show…

If there’s one thing Adam Brody and Leighton Meester are great at, it’s keeping a low profile. After initially meeting on the set of 2011’s The Oranges, they reportedly started spending a lot of time together, but weren’t confirmed to be dating until February 2013.

Even then, they didn’t share many details about their budding relationship. A year later, they took everyone by surprise when they tied the knot in a super secret wedding.

News of the nuptials weren’t even made public by the lovebirds — the big day was confirmed by unnamed sources to Us Weekly.

When the couple welcomed their first baby, Arlo Day Brody, in September 2015, it was more of the same, as they kept mum on the subject and took their time to share the sex and name of their bundle of joy.

To this day, they rarely talk about their love life publicly

When it does happen, it’s very brief, like in 2019 when Meester told The Hollywood Reporter, “He’s my best friend. I wanna work with him on everything, and I think he’s the best in everything.”

They’re also not concerned with following any traditional rulebook, as Meester revealed to Shape, saying, “I just don’t believe in balance”. Rather, they focus on doing whatever it takes. “Some days my husband makes dinner, and some days I do,” she continued. “Other days, I’m too tired, and I eat a bowl of cereal for dinner. It’s just the thing we do to make it work.”

Having shared passions outside of acting and their family, like charity work, has been another key to their success.

In 2017, for example, they teamed up with Feeding America to serve lunches to underprivileged youth at the Para Los Niños Charter School in Los Angeles.

Leaving Seth and Blair behind

In a rare joint interview, Brody revealed that they do occasionally reflect on the fact that Seth Cohen and Blair Waldorf ended up together and talk about it “once a year, randomly, on our Seth and Blair day — it’s good for a laugh,” he said.

By keeping their private lives private, sharing similar passions, and learning from the fictional characters that made them famous, Adam Brody and Leighton Meester have been able to build a grown-up, loving marriage — without the unnecessary drama that dictated their on-screen romances.