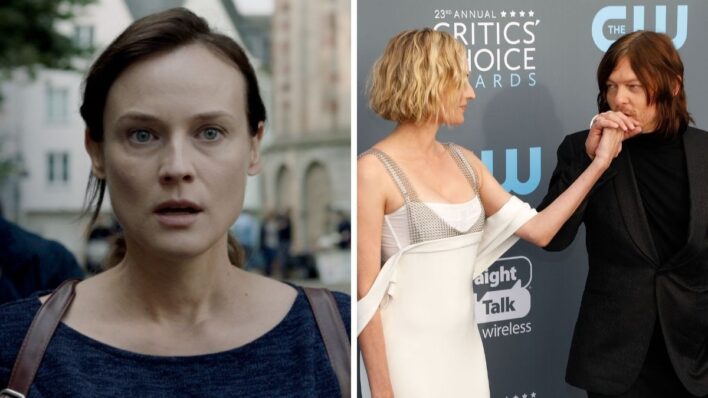 After breaking up with her longtime boyfriend, Diane Kruger put herself first- which lead her to find her perfect partner
By Barbara Pavone    September 16, 2021

After breaking up with her longtime boyfriend, Diane Kruger put herself first- which lead her to find her perfect partner

Diane Kruger did not have an easy 2016. First, she and longtime boyfriend Joshua Jackson broke up that July after a decade together. Then, in November, she found herself mourning the death of her stepfather. What’s more, she was dealt another blow when she lost her grandmother — and it all happened in the span of eight months. As she told Vulture in December 2017, “I felt like I was drowning.”

Opening up about her breakup, the “Inglourious Basterds” star told the outlet it left her feeling sad, rather than angry. Noting that it “was a long time coming,” she shared, “You don’t break up overnight after ten years, you know what I mean?” And while the actress didn’t get into too many details, she did admit that it was her choice and that she knew it was the right one. If not the easy one.

Speaking with Boston Common, she explained, “I think life’s better with somebody holding your hand, but I’ve also learned that I need to take care of myself first. In the past, I’ve been incredibly disappointed in people,” she admitted, adding, “You think you’re moving toward the same goal, and then you’re not.” She also told WWD how, “as we get older, people tend to take less risks. There’s so much to lose and it’s so hard to move on from a situation that is not good for you anymore,” she explained, saying, “I’m certainly guilty of that.”

as we get older, people tend to take less risks. There’s so much to lose and it’s so hard to move on from a situation that is not good for you anymore. I’m certainly guilty of that.

And while she didn’t cherish the idea of breaking up, she did make the most of it. For one, she used it as a learning experience. “There are certain things I won’t accept anymore,” she said, noting, “I think when you’re in a long-term relationship, you start making excuses, and you’re making a lot of compromises — which obviously you need to make to make things work — but I think there are certain things that I’ve learned I don’t want to accept anymore,” she concluded.

Kruger also used the split as an opportunity to focus on herself and her work. She moved to New York City from Los Angeles; she learned to ride a motorcycle; and she threw herself into acting. “It felt liberating because I didn’t have to worry about that anymore, so I could immerse myself 100 percent into something else,” she told Vulture.

The result? A German thriller called In the Fade in which Kruger plays a woman mourning the murder of both her husband and son. Vulture dubbed it “the bravest performance of her career” and, indeed, the actress admitted that shedding the heaviness of the role “was a long process.” Especially because she was still “grieving the loss of my stepdad,” but luckily, her family and friends were there to support her, as was Norman Reedus. The notoriously private couple — “I don’t want to talk about that part of my life; That’s one thing I learned,” Kruger told Boston Common  — went public in March 2017 and as she told the mag, she felt “lucky” to have him “just be present and walk that walk with me to the light.”

Diane Kruger and Norman Reedus first met on the set of 2015’s Sky and quickly built a strong rapport. The actress was still dating Jackson at the time and admitted to People that meeting Reedus, who plays her love interest in the flick, came with some jitters. “I was really nervous about meeting him and not being able to have a drink with him, or talk with him” before shooting “a lot of intimate scenes,” she shared. But there was nothing to fear and she was soon “pleasantly surprised” as she discovered that the actor is nothing like the characters he so often plays. Praising him for being “so relaxed,” Kruger enthused, “He’s really easygoing, very gentle.” As for Reedus, he dubbed Kruger “a dream” to work with and called her “the prettiest of co-stars” on Instagram.

I think when you’re in a long-term relationship, you start making excuses, and you’re making a lot of compromises — which obviously you need to make to make things work — but I think there are certain things that I’ve learned I don’t want to accept anymore.

That admiration eventually turned into a love connection and while their unexpected union raised some eyebrows (E! even called it “unexpected”), an insider told Us Weekly in 2018 that “opposites attract” and that’s certainly true for Kruger and Reedus. Calling her “so buttoned up and put together” and him “rough around the edges,” the source assured they “are so different, but they really do work” because “they complement one another.”

Turns out that source really knew what they were talking about. Jump to November 2018 and the couple confirmed they had welcomed their first child together and in 2019, Kruger gushed to People about how “very great” Reedus is with their daughter. He just looks at her with unconditional love. I wish he would look at me like that,” she quipped. What’s more, Reedus’ teenage son from his previous relationship with Helena Christensen effortlessly joined their blended family. “19 years is a big gap so he’s really stepping up to be this protective big brother,” Kruger shared.

Diane’s tough love approach led her to her perfect partner

And while they do like to keep things private, Kruger has posted plenty of heartfelt messages to her beau on social media. Taking to Instagram on Thanksgiving 2018, she enthused, “I have A LOT to be thankful for this year and I count my lucky stars to have met you [Norman] and for sharing life’s many blessings with you.” In 2020, she celebrated his 51st birthday by gushing, “My teenage dream of a man right here! HAPPY BIRTHDAY to the love of my life” and on Father’s Day 2021, she called him “the one with the sweetest heart.” She also joked about having to quarantine together, writing, “If we survived this year together we’re in it for the long haul.”

She wasn’t kidding. In August 2021, People confirmed that Kruger and Reedus had gotten engaged after celebrating their five-year anniversary, proving that Kruger’s tough new approach to love sure paid off. The right decision isn’t always the easy one but fear should never prevent us from following our instincts and searching for what really makes us happy. Diane Kruger shows us just how imperative that is and the fulfilment and joy that can come from doing what’s best for you.