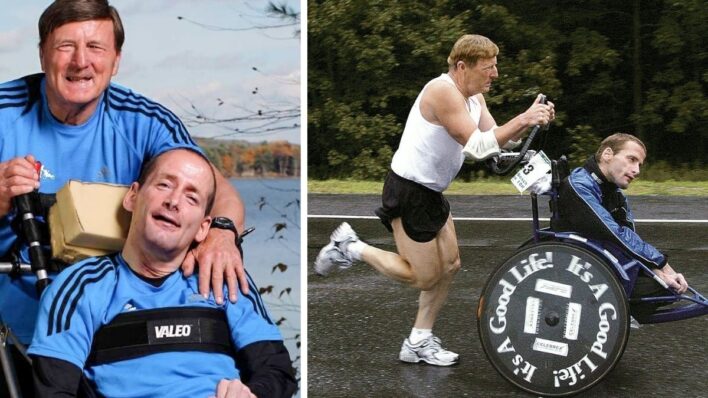 Dick Hoyt is a name many of us may not recognize – but most of will recall the image of
By Aly Walansky    March 21, 2021

Dick Hoyt is a name many of us may not recognize – but most of will recall the image of a man running in marathons pushing his wheelchair-bound son the whole way.

The man behind the wheelchair

That man, Dick Hoyt, did this in more than one thousand marathons nationwide, most notably the famous Boston Marathon, and he has been a beloved symbol of fatherly love. He died this week at home in Holland, Massachusetts, of congestive heart failure. He was 80.

Hoyt’s son Rick was born in 1962, a quadriplegic with cerebral palsy, and could not control his limbs or speak. “We had long since learned how to interpret our son’s smiles and nods,” Dick Hoyt wrote in his 2010 book, “Devoted: The Story of a Father’s Love for His Son.”

“But as good as everyone in the family was about figuring out what Rick needed, we were still only making educated guesses.”

-excerpt from “Devoted: The Story of a Father’s Love for His Son”

Hoyt first pushed his son Rick in a 1977 race and, they did their first Boston Marathon in 1980 with the help of a racing wheelchair. Hoyt was always able to find a way of including his son in the races.

Dick Hoyt tried to do for others what he did for his son, and in 1989 established the Team Hoyt Foundation, which currently has chapters across the United States and Canada. The organization “aspires to build the individual character, self-confidence and self-esteem of America’s disabled young people through inclusion in all facets of daily life,” according to its website.

What an inspiring legacy of family and love that we can all learn from. Rick may have not had the legs to run, but with his father being the legs for him, he really was able to run the distance.