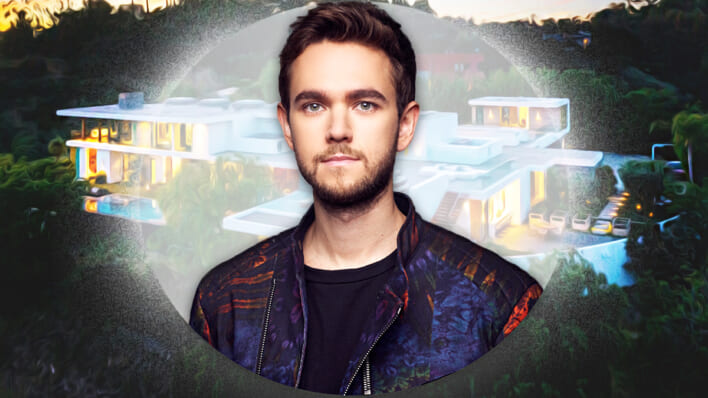 How a Russian DJ Went from the Soviet Union to a $26.5 Million Mansion in Beverly Hills

The Russian-German music producer DJ Zedd hasn’t had the most straightforward road to success. His journey carries a crucial lesson for everyone.
By Shaoni Das    May 11, 2022

The Russian-German music producer DJ Zedd hasn’t had the most straightforward road to success. His journey carries a crucial lesson for everyone.

If you’ve been to a club in the last few years, you’ve probably danced to one of DJ Zedd’s elite creations. Even if you don’t know his name, it’s safe to say Zedd has established himself as one of the most talented and versatile music producers in the modern day scene.

Every beloved 21st-century artist, from Ariana Grande to Justin Bieber to Katy Perry, has relied on his ability at one point to churn out a hit, making him a highly coveted producer as far as collaborations go. His cerebral understanding of what makes for an infectious, exhilarating, radio-friendly tune is next to none, and it’s not at all surprising why he’s so successful, and rich because of it.

Yet, every genius has a story. No one can become a jewel in the crown without putting in the hard work. Luck does play a part, of course, as it does in anyone’s ascent to the top, but you do have to experience specific struggles to achieve your dream, whether you want to or not.

It’s high time we take a moment to examine Zedd’s journey and how his beginnings intersect with his contemporary celebrity.

The Secret Origins of DJ Zedd: From Piano Player to Metal Drummer

Born in Soviet Russia on September 2, 1989, Zedd has always had a penchant for music. Both his mom and dad taught music, so it didn’t take a long time for baby Zedd to follow in their footsteps and start exploring rhythm and bass.

He began learning classical music through piano at four and started composing his first tunes alongside his older brother. “We still have video tapes of it, but I don’t believe we ever gave it a name,” he told Billboard. Though his parents were professional musicians, they never expected their son to transition his talent from a mere hobby to worldwide renown.

So, while my success was rather unexpected, they certainly are happy I was able to fulfill my dream of turning my hobby into my job.

He and his family moved to Germany in the early ’90s. The town in which he was raised was so quiet and isolated, Zedd didn’t have a choice but to stay home and hone his craft. “I think it may have inspired me to spend more time at home and make music,” he said. But just because there weren’t a lot of activities in his hometown doesn’t mean he didn’t keep himself busy.

He picked up the drums at 12 and even founded a “metalcore” band as a teenager, getting himself more and more acquainted with the act of live performance. Around this time, he decided to release some of his material online, hoping to draw the attention of a well-connected executive or two. This continued for some time until someone did take notice, the godfather of dubstep: Skrillex. Soon, Zedd found himself mixing Skrillex’s tracks and supporting him on his US tour.

RELATED: How Frank Ocean Outsmarted His Record Label And What That Teaches Us About Self-Belief

In his early 20s, and not knowing adequate English, Zedd struggled to communicate with his audience, which, in turn, impacted the delivery of his work. Skrillex showed him how he could leverage his energy to meet the crowd at their level and forge a connection. “Skrillex is like, “You’ve got to talk to the crowd.” I was like, “Oh, I can’t do this — I’m not confident,’” he recalled to Rolling Stone. Eventually, just watching Skrillex interact with the concert-goers changed his entire approach, and he decided to adjust his performing style to emulate his mentor.

The first couple of years in the US were tough on Zedd: he lived in a “cramped” Santa Monica apartment whose walls were so thin that he would be woken up at night by his neighbor’s vibrating phone, he could barely speak the language, and he had to earn his livelihood by songwriting for other people. Yet, he held on in the hope that his hard work would pay off.

And paid off it did.

Why Is Zedd Different from Other DJs?

Today, Zedd’s net worth is in the millions, and he is in the midst of producing his third studio album. He recently put his $26 million Beverly Hills mansion on the market (an asking price he recently reduced to just $23 million) and has his own residency at a club in Las Vegas.

Yet, despite the riches, he’s never forgotten his roots. He spends Christmas in Germany every year without fail, he still goes on vacations with his childhood buddies, and above all, he makes sure his focus is on his art, not on the luxurious perks that accompany prosperity.

He’s incredibly meticulous about his performances, to the point that he refuses to be identified as a mere ‘DJ.’ Every aspect, from the choreography to the lightning to the sound design, is curated to fit a creative vision. Zedd understands the critical nature of his artistry as well as the platform he holds in terms of bringing EDM to the forefront of pop music. “I would say the majority of my set is pre-planned; it’s a show that I want to present. I want people to see something that I spent a lot of time working on,” he told Forbes.

Furthermore, he isn’t just someone who chases big-name stars to feature on his record. He goes with vocal powerhouses who can execute his concept and stay true to what he is trying to accomplish. “Every single person I worked with trusted my vision,” he told Rolling Stone. “It was like, just trust me. I’m not gonna do anything that’s not great.”

Zedd’s journey is a testament to the patience and sheer grit it takes to build a career.

You can’t take to the skies immediately; you have to practice and improve and learn and build relationships with people. You have to get lucky, as well; if Skrillex hadn’t been on his phone the exact moment Zedd had sent him a sample of his work, the latter would have been living a different life.

Everyone has a beginning, and there’s no shame in coming up from the bottom and wading through a lot of drama, difficulty, and disappointment to realize your dream.