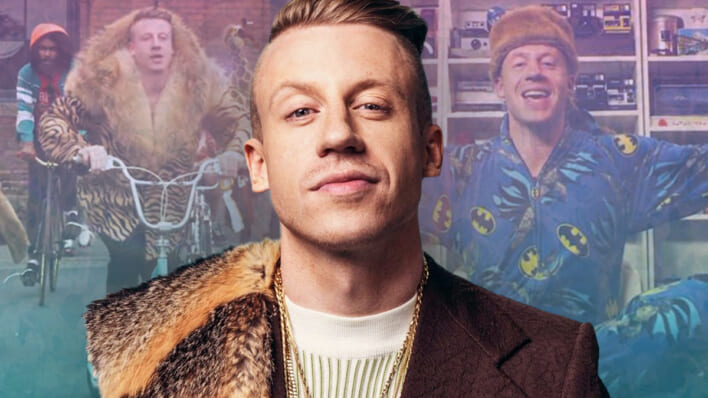 After the Heist: What Happened to Macklemore – And What’s He Doing Now?

The ‘Thrift Shop’ rapper was poised to hit the upper echelons of the music industry, but he chose to take a step back and reevaluate his priorities.
By Shaoni Das    May 8, 2022

The ‘Thrift Shop’ rapper was poised to hit the upper echelons of the music industry, but he chose to take a step back and reevaluate his priorities.

When Macklemore stepped into the scene nearly 10 years ago, he was seen as unstoppable.

The Seattle native, alongside his longtime producing partner Ryan Lewis, captured the entire world’s attention with their debut studio album, The Heist. Not only was their artistic style unique and infectious — engineered perfectly for maximum radio and social media coverage — but the message driving the music was promising and transformative.

In short order, he firmly established himself as a socially conscious rapper, someone who would go to bat for minorities, fight for their equality, and use his platform to spotlight their challenges. He was slated for big-time stardom, having hit number one in multiple countries and winning a slew of accolades at the Grammys.

What happened next? Well, it’s not that Macklemore and Ryan Lewis dropped off the face of the earth; they continued releasing music and performing in venues, and appearing on talk shows. But the hype had fizzled. Something wasn’t clicking like it did, and the audience moved on to other performers.

However, just because Macklemore doesn’t command the same level of mainstream attention doesn’t mean his work is any less meaningful, or that he’s been any less busy.

What’s fascinating about Macklemore is that he’d never been a traditional artist. Whereas most up-and-coming rappers prefer to sign with a major label to advance their dream, Macklemore prefers to be independent.

When he and Ryan Lewis completed their record, they sold a percentage of the royalties to Warner Music Group. In return, the label supported the promotion and the marketing of the album, allowing Macklemore to spread the word. The unusual arrangement meant that Macklemore has always been an “independent” artist and hasn’t had the stalwart financial backing that most of his peers possess. It also explains why it’s been tough for him to advertise his work in recent years, though it’s worth noting he has a sizeable cult following.

Ryan Lewis’s departure also marked a turning point. The two had been close collaborators, and Ryan was a critical part of Macklemore’s early success, having produced every track in the latter’s debut album. Ryan Lewis also produced Macklemore’s next album, The Unruly Mess I’ve Made, in 2016, which also featured a number of notable singles.

In 2017, the duo announced that they were splitting up and needed “creative space” from each other. Though the pair went their separate ways, there were no hard feelings. “Ryan Lewis is my brother forever. We have been working together damn near every day for nine years, and it felt like the right time,” Macklemore wrote in an Instagram post. It’s hard to gauge whether Ryan’s exit impacted the quality of Macklemore’s work, but there was definitely a shift in how his music was received by the public.

Some relatively enormous changes took place in Macklemore’s personal life as well. He welcomed his first child in 2015, his second in 2018, and his third in 2021. Being a dad of three — especially one as devoted and passionate as Macklemore — doesn’t leave room for much else, so it’s fairly understandable why he would fall off the radar.

Macklemore never stopped making music or touring. His most recent single, “Next Year,” was released on October 29, 2021, and his biggest fans continue to support his career. Just because the mainstream media stopped following his every move doesn’t mean he’s any less significant. In fact, the work he’s doing with his platform is nothing short of remarkable.

He works with several organizations across the country and has become a champion in raising awareness about drug addiction, LGBTQ+ discrimination and racial inequality. His website features a separate Activism tab that takes visitors through Black-led organizations that they can support.

Speaking about his philanthropy, Macklemore told HollywoodLife that his acts of service originate from “a real place, an authentic place, and tap into gratitude, which, it’s an amazing part of this human experience.”

Growing up working class, the 38-year-old never thought he would have the life he does; that’s why he’s made it his mission to shine a light on issues that have gone underreported for way too long.

I think that having a platform is a very valuable thing depending on how you use it. There are ways to have a platform and utilize that to create more opportunity, to create more sources of revenue that can be donated to people that are in need.

When asked if he would ever consider giving up music to pursue activism full-time, Macklemore said, “I think that I have to balance how I am best of service.” He acknowledged his position as an artist and how it’s essential to make music that resonates with the audiences and speaks to sociopolitical realities.

Yes, there’s a lot of brand investment in his philanthropy, but he genuinely wants to leverage his platform to affect change in society: “A huge way for me and my quote-unquote ‘brand’ to be useful is to continue to make music and continue to be out there on tour and put out music that people resonate with,” he said.

Thankfully, Macklemore doesn’t seem to be slowing down on any front. His charitable endeavors are running full steam, and he’s getting back to performing in the post-COVID landscape. He’s also diversified his interests and ventured into sports ownership. In 2022, he announced he was joining the ownership group of the NHL hockey team, The Seattle Kraken.

Macklemore’s journey captures the value of having a flexible work-life balance. You don’t have to be defined by your profession; instead, you should be defined by your passions, whether they lie in your livelihood, family, community work, or hobbies.

We also shouldn’t be making snap judgments about people’s choices. Everyone is on a different pathway and has a mix of priorities. They don’t necessarily see success the same way you do, and that’s okay. Instead of poking holes in their decisions, we should celebrate their achievements and praise them for going against the grain to follow their heart.