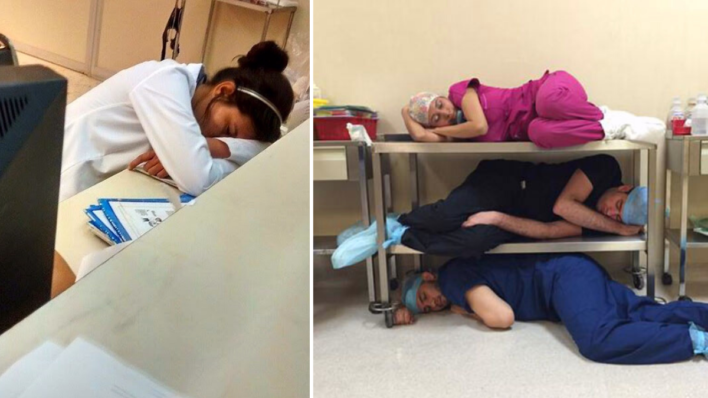 One young resident was photographed and shamed for sleeping during her shift, causing outrage amongst the doctor community.
By Sophie Babinski    December 22, 2021

One young resident was photographed and shamed for sleeping during her shift, causing outrage amongst the doctor community.

When doctors start out in their profession, they take the Hippocratic Oath. The oath upholds specific ethical standards, including “do no harm.”

A social media controversy in 2015 was centered around a young doctor who fell asleep on her paperwork, with people accusing her of not doing her job. Not willing to let one of their own be criticized in this way, the worldwide medical community jumped to her defense, kicking off the hashtag  #YoTambienMeDormi (I’ve also fallen asleep).

We are aware that this is a tiring job but doctors are obliged to do their work. There are dozens of patients in need of attention.

Social media to the rescue

The incident originally occurred in Mexico. The whole medical community in Latin America was quick to discuss their own experiences as doctors, explaining that the expectation that doctors stay awake and alert for up to 80 hours was unreasonable. Eventually, the hashtag was shared over 14,000 times and even made its way to Latvia!

36 hours working nonstop is impossible without 10 minutes of rest.

Paolo Perez, a surgeon in Ecuador.

#YoTambienMeDormi on a 24 hour on call having operated for 19 in a row. Doesn’t mean I don’t care about my patients.

Sure, doctors make a good living and are paid handsomely for their hard work. However, the fact remains that they are human beings and not machines. They have the same physiological needs as you and me- including the need to sleep! In order to power through the 36+ hour shifts required of them, many doctors forgo food and take small power naps whenever they can get them.

Luckily, some legislation is making life a little easier for those who work in the profession. In the United States, rules were implemented in 2011 by the Accreditation Council for Graduate Medical Education stating that interns are not allowed to work more than 16 hours in a row, while residents can’t exceed 28 hours. Let us continue to advocate for health care workers, especially during this global pandemic. Along with their regular duties, they have had to tackle the damaged caused by a highly contagious virus. The more rested they are, the better our care is bound to be!

lead with empathy
“True empathy requires that you step outside your own emotions to view things entirely from the perspective of the other person.”- Anonymous
Tags
Share
← Prev Post Next Post →