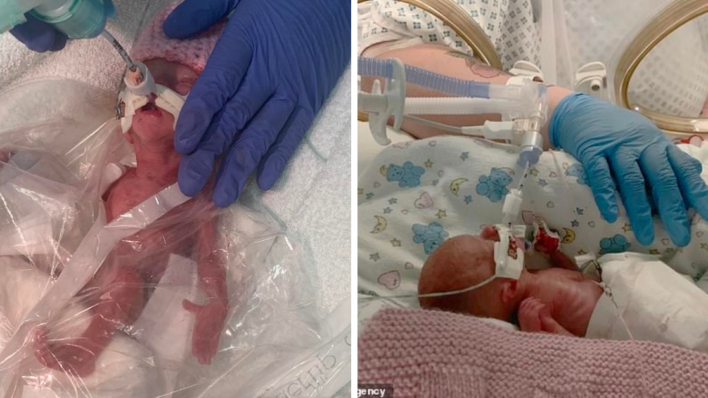 A U.K. couple almost lost their newborn, born at just 27 weeks with an emergency C-section — until quick-thinking healthcare workers
By Joel Balsam    February 17, 2021

A U.K. couple almost lost their newborn, born at just 27 weeks with an emergency C-section — until quick-thinking healthcare workers saved the baby’s life.

Emily Rospo and Samantha Hughes had been trying for a baby for three years, but 27 weeks into Rospo’s pregnancy they got horrible news.

Rospo, 30, was sold she had to undergo an emergency Caesarean section to deliver the baby after being diagnosed with placenta insufficiency.

“We were told multiple times to prepare for the worst and that she was unlikely to make it,” Rospo told The Daily Mail. “Nothing can prepare you for being told that your baby might not make it.”

“Despite being told her chances were slim, I kept a positive mindset and believing she was going to make it is what got me through.”

When Orla-May Rospo-Hughes was born, she weighed just 1.08 pounds — a reasonable weight for 22 weeks, though she was born five weeks later.

Doctors had a trick up their sleeve

Immediately after being born, the baby struggled to breathe and doctors worried that her newborn skin wouldn’t be able to sustain enough heat to keep her body warm. So, the medics had a creative idea.

After putting a tube down Orla-May’s throat, they wrapped her in a sandwich bag to keep her warm. Rospo was shocked, having never heard of the sandwich bag trick before.

“I didn’t even get to see her before she was taken away; there was a lot going on in the room and I felt all sorts of emotions,” Rospo said. “Seeing her in there like that was scary – she was tiny. She’s smaller than the size of my hand.”

But according to The Daily Mail, the sandwich bag trick is commonly used in the U.K. and goes as far back as a 1971 US study as a way to keep newborns warm.

Orla-May is still in hospital and being monitored, but miraculously, she’s doing well.

“We haven’t been able to hold her yet but we are allowed to touch her and be with her 24/7,” Rospo said.

“We take each day as it comes; she has managed to put a little bit of weight on so we’re just trying to stay positive.”

No parent wants to hear that their baby is in danger. All they can do is put their faith in the experts, and thankfully, these doctors were up to the challenge.

This is a good opportunity to be thankful for all the spectacular healthcare workers out there saving babies and coronavirus patients. We’d be lost without their bravery.