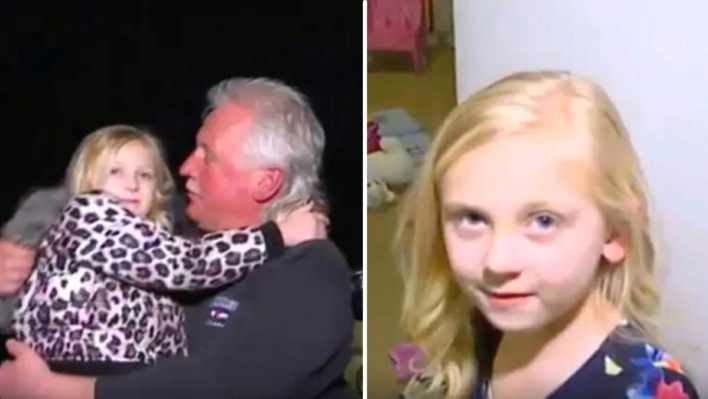 The two girls had crossed a bridge and ventured onto a dangerous highway.
By Sophie Tolias    November 8, 2022

The two girls had crossed a bridge and ventured onto a dangerous highway.

Having your child leave the house in the middle of the night is every parent’s worst nightmare. But that’s exactly what happened to a family in Washington State. Thankfully an eagle-eyed couple came to the rescue.

Marc Breckenridge and his fiancée were driving home late one night when a chocolate labrador dashed onto the road. Breckenridge pounded on his brakes and was shocked to see the dog followed by two little girls. One of them was Paislee, age 5, with her was a friend, who was 6.

Too young to be out on their own wandering by a busy highway, Breckenridge parked the car and quickly led the girls off the road and away from traffic.

RELATED: Cop Pulls Distraught Elderly Man Over For Speeding – Has The Best Response When He Hears His Story

“I asked the girls, I said, ‘What are you doing? Where are you going?’ And the girls said, ‘We’re going to the store. We’re gonna get some treats and buy some toys,'” Breckenridge told FOX13.

The girls had waited until Paislee’s parents were in bed and then snuck out to make their way to the country store, which was a quarter mile away across a bridge, over a river, and a dangerous highway.

Guided only by a colored light at the end of Paislee’s toy baseball bat, they headed to the store to buy some fun things.

Breckenridge took the girls’ hands and brought them back home, walking a quarter mile to knock on Paislee’s front door. It was almost midnight when they arrived and her parents were beyond shocked, relieved and grateful.

They had no idea the girls were not safely sleeping in their beds and Breckenridge said their eyes bugged out of their skulls in shock.

RELATED: Stranger Driving To Work Immediately Pulls Over And Calls 911 After A Woman On The Street Catches Her Attention

Paislee’s mother, Tiffany Parris, said so many things were flooding through her mind when she learned the girls had sneaked out.

“They could’ve been hit by a car, the little bridge that they crossed, they could’ve easily fallen in the river, someone could’ve picked them up, a drunk driver could’ve hit them. There’s so many different things that could’ve happened,” Parris said to FOX13.

How One Stranger Proved the Importance of Looking Out for Kids

Paislee’s parents were so grateful that Breckenridge took the time to see what was going on and help the girls home. “Just by the grace of God he stopped and realized something was wrong. I cannot thank him enough, from the bottom of my heart,” Paislee’s mother said.

But Breckenridge says that it was his responsibility to make sure the little girls and their dog returned home safely. “You protect little kids. That’s what you do,” he said.

RELATED: Mom Stranded on the Highway Without Cell Service Begins to Panic – Then, a Man Pulls Over

As all parents should do, Paislee’s parents have since talked to her about the importance of not sneaking out. They’re not sure if the plan was hatched after watching it in a movie or if it was her friend’s idea. But they’re so grateful to Breckenridge and his fiancée and have told their newfound friends they are welcome to their home anytime.

It takes a village to raise children, and although you hope nothing like this happens, it’s comforting to know that there are people out there that care to help.

Aggressive Man Troubles Woman Waiting by Herself Outside – Then, Someone Else Pulls Up Next to Them