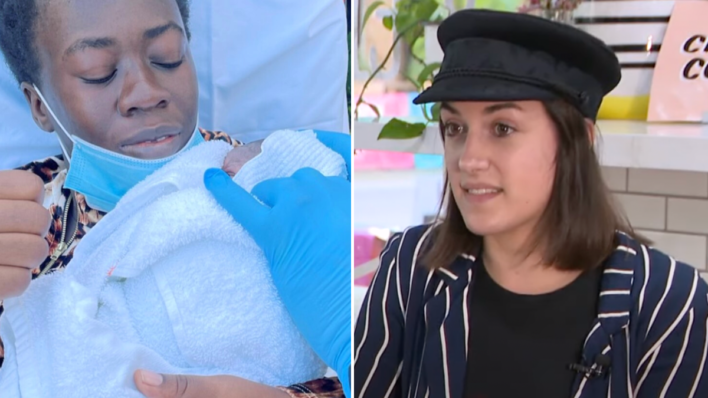 One woman stops on her way to work when she notices a family on the side of the road and helps a stranger deliver her baby.
By Sophie Tolias    March 6, 2022

One woman stops on her way to work when she notices a family on the side of the road and helps a stranger deliver her baby.

Stela Niznik set an intention in yoga class to do something good for someone. After class, on her way to work, the owner of Chicken and the Egg restaurant finally got that chance.

As she was driving through downtown Miami, she saw a car parked in the middle of the street. A man, a little girl, and an older woman were standing outside, but it was another woman that really caught her attention.

“The woman was pregnant and wearing a dress and I could see blood all over her legs.” Stela told NBC11 News.

She pulled over and called 911. The operator instructed Stela to check how far along the woman was. An ambulance was on its way, but Stela could already see the baby’s head.

The woman on the phone then told me to take a deep breath and ‘stay calm’ because: ‘You have to deliver the baby now, you don’t have time to wait for the ambulance.’

The operator stayed on the phone and instructed Stela to have the pregnant woman lay on her yoga mat.

“I’m pushing with one hand, and with the other hand I just started slapping her legs, yelling at her like crazy, I’m like, ‘Come on mom! You got this. Just keep on pushing, push!’” Stela said. “And then eventually the baby just perfectly landed in my hands.”

Not long after, the ambulance arrived and took the mother and her newborn to the hospital, where they were both confirmed to be healthy.

But that’s not where it ended for Stela and the family.

Since the baby’s birth, Stela learned the family’s story. The family traveled from Haiti to Chile. After life became difficult in Chile due to the pandemic, they decided to make their way to the United States for a chance at a better life. For three months they travelled by bus and foot through 11 countries, while experiencing mental and physical hardships, including being robbed multiple times, until they reached Miami.

To show just how much they appreciate Stela’s support, they’ve given their baby girl a very special name: Darlie Stela.

Now, with a newborn, they’ve been working to start their new life in a new country and Stela decided to help.

Now a friend of the family, she started a GoFundMe for them.

“Since then I am helping the family with doctor’s appointments, transportation, looking for a home, and buying basic needs. The funds will be transferred into my bank account until we open up a bank account for Darlie,” Stela wrote on the GoFundMe page. “The family is aware of the funds and I am currently handling their bills until the family has their own bank account.”

I have no doubt that God placed Stela in my life. I hope she continues to help others because God will bless her.

Whether it was fate or not, Stela reminds us to set the intention to help others and then actually help when the opportunity arises.